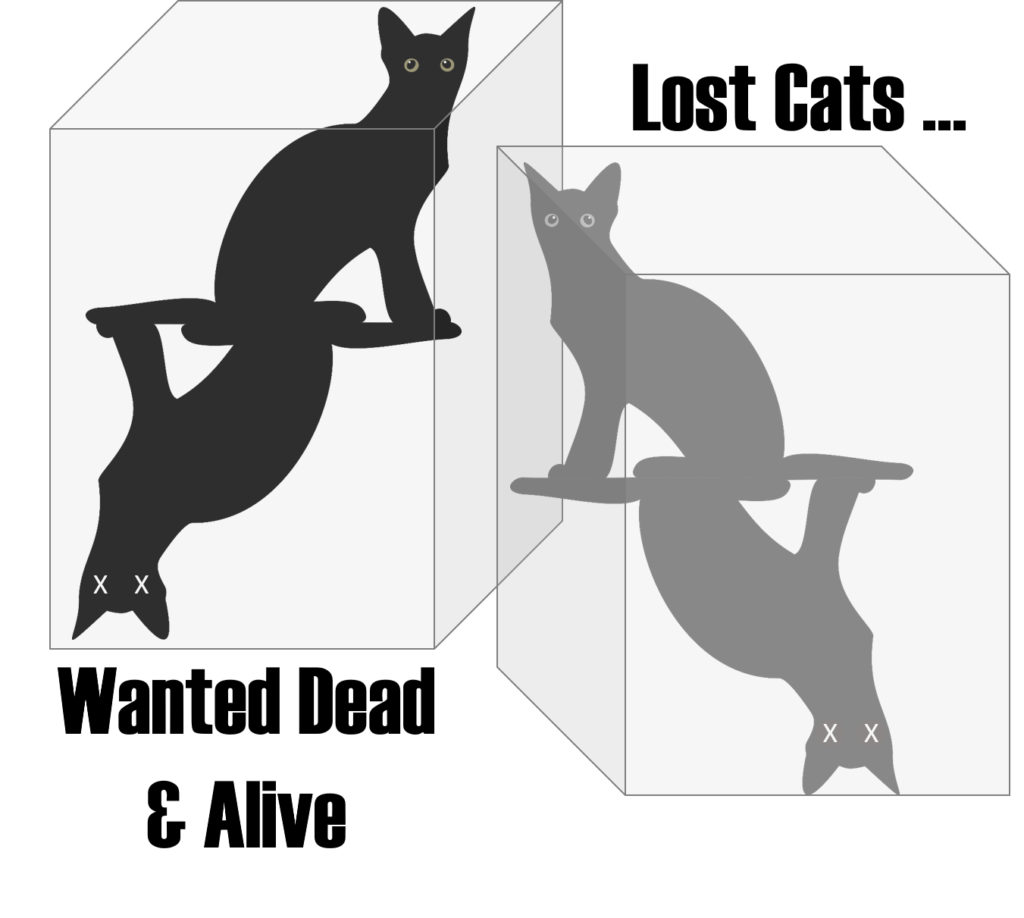 “The decades-old paradox of Schrödinger’s cat, in which the feline is both dead and alive at the same time, has taken a giant leap forward,” reports Jason Thomson (@jason_a_thomson). “The cat now exists in two boxes, simultaneously. And it’s still dead and alive.”[1] You might be wondering how a cat got caught up in discussions about quantum physics and quantum computing. It all began when physicist Erwin Schrödinger noted that if his cat found itself in the weird quantum world it could simultaneously be both dead and alive. Anjana Ahuja reports that on one office door at the European Organization for Nuclear Research (Cern) in Switzerland, there is a poster featuring the photograph of a cat that proclaims, “Lost cat. Please return dead and alive to Erwin Schrödinger.”[2] Ahuja explains this bit of quantum humor:

“The cat — a feline in a locked box that is both dead and alive until the box is opened — was a thought experiment devised by physicist Schrödinger to expose the counterintuitive weirdness of quantum theory. The theory posits that an entity can exist simultaneously in any number of states until the point at which it is observed, whereupon it will ‘collapse’ into one state — either purring or deceased in the case of the trapped tabby, which is incarcerated with a poison that either has or has not been released through radioactive decay. Geniuses have spotted that tapping into the quantum realm could release fantastic amounts of computing power.”

If you are still confused and wondering what an alive/dead cat has to do with quantum computing, you are probably not alone. Quantum computing takes advantage of the “Schrödinger’s cat” paradox by using quantum bits (or qubits) to do calculations. Since a qubit can simultaneously represent both a 0 and a 1, it would only take a few cubits to perform analysis that current computers can’t perform in a timely manner. The condition of being in two states at once is called superposition. A subatomic particle becomes a qubit when placed in a superposition. Because the qubit is the irreducible carrier of quantum information, it also requires the least amount of energy to control; hence, quantum computers hold the promise of small size, great speed, and efficient operation. It should come as no surprise that developing a commercial-grade quantum computer has become the Holy Grail of computing. But let’s get back to Schrödinger’s cat. As Thomson notes, “Scientists have added another box. And another cat. And the first cat being dead and alive simultaneously in the first box, so this causes the second cat in the second box to also be dead and alive at the same time.”

The second box holding the metaphorical second cat was discovered by a team of Yale University researchers. Delila James (@delilalaw) explains, “In the new twist on the old paradox, the Yale physicists created an analogous experiment using quantum entanglement, or what Einstein called ‘spooky action at a distance.’ The phenomenon happens when two subatomic particles become entangled so that any change in one particle occurs simultaneously in the other, regardless of how far apart they are.”[3] Weird indeed. But James explains, “The Yale experiment gets even weirder. By creating two tiny aluminum boxes to house subatomic particles and connecting them with a superconducting artificial atom, the scientists show that the imaginary cat — represented by the trapped microwave light in both cavities — is not only dead and alive simultaneously, it can exist in two places at the same time.” Allison Eck (@allisonceck) explains the experiment in simpler terms.[4] She writes:

“The team effectively sawed the box in half; in other words, they severed the link that was the channel to see if the photons inside the individual cavities were still ‘working together,’ meaning they still added up to a true state of quantum superpositions, even when its components were broken down into smaller parts. The answer? They did add up to the expected quantum state — the cavities had been entangled. These entangled cavities, it turns out, could help scientists measure phases of light more accurately. They could also function as qubits, or quantum bits of information. … Linking qubits in this way could improve the efficiency and power of quantum computers.”

Lead author of the Yale team’s research, Chen Wang, told Rachel Feltman (@RachelFeltman), “It’s understandable that people don’t understand it. You can’t understand it using common sense. We can’t either.”[5] That should make you feel a little better. It turns out the Yale’s team discovery could help ensure error-free quantum computing. Jim Shelton reports, “The research … has potential applications in quantum computation. A quantum computer would be able to solve certain problems much faster than classical computers by exploiting superposition and entanglement. Yet one of the main problems in developing a reliable quantum computer is how to correct for errors without disturbing the information. ‘It turns out “cat” states are a very effective approach to storing quantum information redundantly, for implementation of quantum error correction. Generating a cat in two boxes is the first step towards logical operation between two quantum bits in an error-correctable manner,’ said co-author Robert Schoelkopf, Sterling Professor of Applied Physics and Physics, and director of the Yale Quantum Institute.”[6] If your head doesn’t hurt too much from contemplating the state of Schrödinger’s cat, you might want to watch the following video that explains more about quantum computing.