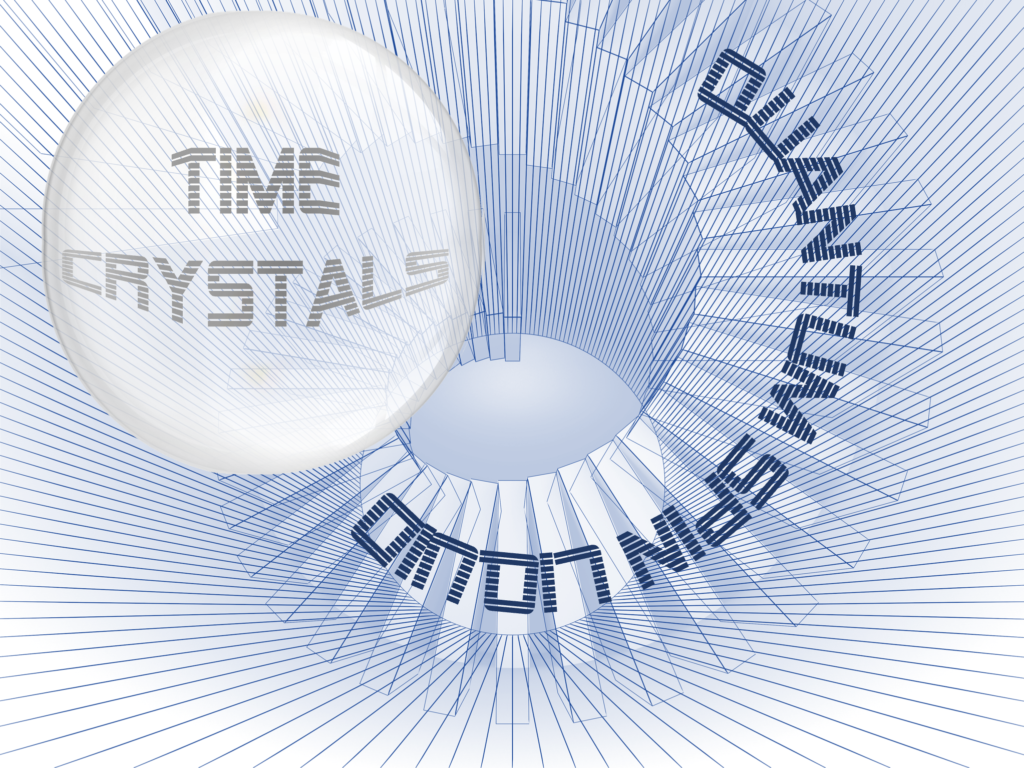 The quantum world is both weird and fascinating. In a previous post, I discussed how a quantum computer was used to create something called a time crystal — a new state of matter.[1] Tech writer Daphné Leprince-Ringuet (@daphneleprince) reports, “If ‘time crystal’ sounds pretty sci-fi that’s because they are. Time crystals are no less than a new ‘phase of matter’, as researchers put it, which has been theorized for some years now as a new state that could potentially join the ranks of solids, liquids, gases, crystals and so on.”[2] Now scientists from Harvard University have announced the creation of another state of matter. They explain, “This bizarre state of matter is called a quantum spin liquid and, contrary to the name, has nothing to do with everyday liquids like water. Instead, it’s all about magnets that never freeze and the way electrons in them spin.”[3] These breakthroughs represent the type of new knowledge we can expect to emerge once quantum computers are perfected.

The first breakthrough with time crystals was announced by Google in August 2021. As I noted in my previous article on the subject, to understand what a time crystal is, you first have to understand the nature of crystals. The staff at the Physics arXiv Blog explains, “Crystals form when energy is removed from certain materials forcing them to adopt new spatial structures. A key property of crystals is that when they form, symmetry becomes broken. Instead of the material being the same in all directions, it is the same only in some directions. It forms a periodic structure.”[4] So how does this explanation relate to a time crystal? The Physics arXiv Blog staff explains, “Back in 2012, the Nobel prize-winning physicist Frank Wilczek and his colleague Al Shapere struck on an interesting idea when contemplating this phenomenon [of how crystals form]. They reasoned that the laws of physics are symmetrical in time as well as in space, so this kind of behavior should not be confined to spatial dimensions alone. Similar periodic structures, they decided, ought to appear in time as well. They called these structures time crystals.” Another group of scientists explain time crystals this way, “The discrete time crystal (DTC) is a recently discovered phase of matter that spontaneously breaks time-translation symmetry.”[5]

If that still sounds confusing, the editorial staff at Silicon Canals tries a simpler explanation, “A time crystal sounds like a complicated component of a time machine, but it is not. So, what exactly are Time Crystals? As per researchers, a time crystal is a new phase of matter that alternates between two shapes, never losing any energy during the process. To make it simple, regular crystals are an arrangement of molecules or atoms that form a regular repeated pattern in space. A time crystal, on the other hand, is an arrangement of molecules or atoms that form a regular, repeated pattern but in ‘time.’ Meaning, they’ll sit in one pattern for a while, then flip to another, and repeat back and forth.”[6] The interesting thing about time crystals is that they seem to defy accepted laws of physics. Leprince-Ringuet explains, “As time goes on, systems inevitably degenerate into chaos and disorder — that is, entropy. Time crystals, on the other hand, fail to settle in thermal equilibrium. Instead of slowly degenerating towards randomness, they get stuck in two high-energy configurations that they switch between — and this back-and-forth process can go on forever.”

Taylor Kubota reports, “While this may sound suspiciously close to a ‘perpetual motion machine,’ a closer look reveals that time crystals don’t break any laws of physics. Entropy — a measure of disorder in the system — remains stationary over time, marginally satisfying the second law of thermodynamics by not decreasing.”[7] In addition, time crystals don’t break the laws of physics because this new state of matter is governed by the rules of non-equilibrium quantum physics and is reversible. In non-equilibrium many-body localized systems, particles get “stuck” in the state in which they started and can never relax to an equilibrium state unless they are jolted by an outside energy source, like a laser. As Kubota notes, “The periodic kick [of a laser] is a loophole that makes time crystals possible.” If you want to dig deeper into how and why time crystals are possible — without having to get a PhD — I suggest reading an article by PhD student Jacob Marks.[8]

“In 1973, physicist Philip W. Anderson theorized the existence of a new state of matter that has been a major focus of the field, especially in the race for quantum computers. This bizarre state of matter is called a quantum spin liquid and, contrary to the name, has nothing to do with everyday liquids like water. Instead, it’s all about magnets that never freeze and the way electrons in them spin. In regular magnets, when the temperature drops below a certain temperature, the electrons stabilize and form a solid piece of matter with magnetic properties. In quantum spin liquid, the electrons don’t stabilize when cooled, don’t form into a solid, and are constantly changing and fluctuating (like a liquid) in one of the most entangled quantum states ever conceived.”[10]

If you are familiar with the basics of quantum computing, you know that the key to creating a more useful quantum computer is generating quantum bits (aka qubits) that are more stable than the qubits currently being used. Because qubits are so fragile, they can easily be knocked out of their superimposed state. According to the Harvard scientists, “The exotic properties from quantum spin liquids could hold the key to creating more robust quantum bits — known as topological qubits — that are expected to be resistant to noise and external interference. ‘That is a dream in quantum computation,’ said Giulia Semeghini, a postdoctoral fellow in the Harvard-Max Planck Quantum Optics Center and lead author of the study. ‘Learning how to create and use such topological qubits would represent a major step toward the realization of reliable quantum computers.’”

Irving observes, “For this study, the team arranged the atoms in a triangular lattice, which means that each has two immediate neighbors. A pair of electrons can magnetically stabilize one way or the other, because their spins can either align or alternate — but having a third wheel throws off that balance, creating a ‘frustrated magnet’ that can’t settle. The resulting quantum spin liquid exhibits a few useful quantum phenomena, such as entanglement — where atoms can influence each other across vast distances and even ‘teleport’ information — and quantum superposition, where atoms can exist in multiple states at once. Both of these are useful for building quantum computers that should be more resilient against external interference.”

Advancements in the field of quantum computing are occurring at a record pace. As the use of quantum computers becomes more ubiquitous, organizations are going to confront new challenges and opportunities. Matthew Marrone, an attorney at the law firm McAndrews, Held & Malloy, observes, “Quantum computing is poised to fundamentally transform the digital world as we know it. Quantum information science (QIS) is an emerging field that combines the properties of quantum mechanics with computing, sensing and networking technologies. As such, it’s poised to drive revolutionary advances across a vast array of essential areas — from national security to energy research to the development of new materials and personalized medicines. … The time to prepare for the coming quantum revolution is now.”[11] He’s correct. Business leaders need a basic understanding of quantum computing and how it might affect their business models.