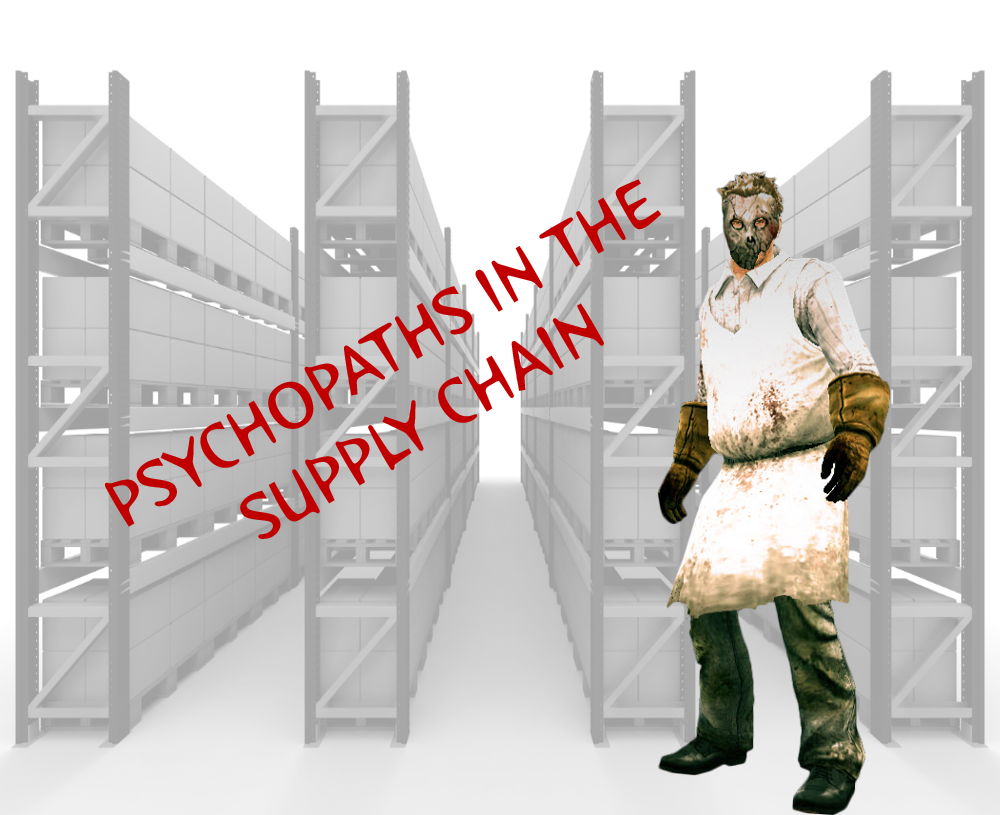 Are "Psychopaths" Helping or Hurting Your Supply Chain?

“A new study shows supply chain executives demonstrate higher levels of psychopathic tendencies than any other role in the business world,” reports Mackenzie Bean (@mackenzie_bhr). “Researchers from Bond University in Australia and the University of San Diego completed a study of 261 corporate professionals working in the supply chain management sector. They found that 21 percent of surveyed supply chain heads exhibited clinically significant levels of psychopathic traits like insincerity, lack of empathy, egocentric behavior and the ability to be charming and superficial at the same time.”[1] Before you start carrying pepper spray to work to defend yourself from your psycho boss, you should know that his or her decision-making skills may be exactly what’s needed in a business environment. Bean explains, “Nathan Brooks, study author and forensic psychologist working on his PhD at Bond University, said the study’s findings showed supply chain executives were able to strip emotion out of their decision-making process and exhibit ruthless behavior.” Okay, so maybe ruthless behavior goes a bit beyond the mark; but, stripping emotion out of decision-making is usually a good thing in business.

The study will likely cause supply chain executives to be the brunt of jokes; but, before other business executives start harassing their cohorts, they should know people are already extrapolating the study’s findings to all corporate leaders. For example, Jenn Gidman writes, “What do prisoners and CEOs have in common? The answer isn’t the punchline to a joke, but the finding of an Australian study out of Bond University that says about 20% of chief executives are psychopaths.”[2] Cheyenne MacDonald (@_cheymac) asserts this extrapolation is supported by other emerging studies that found “individuals with psychopathic traits could make up anywhere from 3 to 21 percent of the corporate world’s top ranking officials.”[3] In fact, some of the supporting research is not new. Several years ago, Victor Lipman observed, “It is not the image we like to have when we think of business leaders. But troubling research indicates that in the ranks of senior management, psychopathic behavior may be more common than we think — more prevalent in fact than the amount such seriously aberrant behavior occurs in the general population.”[4] He continues:

“At first blush this may seem counterintuitive, even outrageous. We tend to think of psychopathy as the province of criminals, with leadership qualities that may land someone atop a fringe religious cult, say — not in a boardroom. But before discussing the research, let’s consider for a moment why this possibility is actually less bizarre than it may initially seem. The hallmarks of the psychopathic personality involve egocentric, grandiose behavior, completely lacking empathy and conscience. Additionally, psychopaths may be charismatic, charming, and adept at manipulating one-on-one interactions. In a corporation, one’s ability to advance is determined in large measure by a person’s ability to favorably impress his or her direct manager. Unfortunately, certain of these psychopathic qualities — in particular charm, charisma, grandiosity (which can be mistaken for vision or confidence) and the ability to ‘perform’ convincingly in one-on-one settings — are also qualities that can help one get ahead in the business world.”

According to Jonathan Pearlman, Brooks, a forensic psychologist, suggests businesses need to improve their recruitment screening. “He said recruiters tend to focus on skills rather than personality features and this has led to firms hiring ‘successful psychopaths’ who may engage in unethical and illegal practices or have a toxic impact on colleagues.”[5] Pearlman provides a list of tendencies that define a psychopathic personality. They:

Brooks told Pearlman, “Typically psychopaths create a lot of chaos and generally tend to play people off against each other. … For psychopaths, it [corporate success] is a game and they don’t mind if they violate morals. It is about getting where they want in the company and having dominance over others.” The fact that psychopaths have no trouble violating morals or repeatedly breaking the law may explain why we see so many business executives take the “perp walk.” Obviously, those are not desired or acceptable traits for anyone leading a company or a managing a supply chain. As noted above, Brooks asserts the one trait that helps so many psychopaths reach the top is ruthlessness. Ruthless people have found ways to reach the highest echelons in many fields. Lipman notes that the book written by Paul Babiak, Ph.D., and Robert Hare, Ph.D., published in 2006, entitled Snakes in Suits: When Psychopaths Go to Work, “is the foundational work on the subject and offers a comprehensive look at how psychopaths operate effectively in the workplace.”

Lipman indicates that previous studies have found elevated numbers of psychopaths in business settings, but nowhere near the 1 in 5 results found in the study headed by Brooks. “Exact counts are impossible to obtain,” Lipman writes. He explains, “It is humorously difficult to imagine a researcher approaching a head of Human Resources and asking, ‘We’d like to do some research to assess just how many psychopaths your organization has in its leadership.'” Nevertheless, he reports, “In 2010, Paul Babiak, Robert Hare and Craig Neumann had the opportunity to examine psychopathy in a sample of 203 individuals from numerous companies’ management development programs. While these individuals were not yet at the top rungs of their organizations, they were on track potentially to get there. The study’s findings were disturbing, bearing out the large amount of anecdotal evidence the researchers had long been gathering. The research showed that approximately 3% of those assessed in this management development program study scored in the psychopath range — well above the incidence of 1% in the general population. By comparison, the incidence of psychopathy in prison populations is estimated at around 15%.”

There is a big difference between 3% of business executives being psychopaths and 20%; but, that is not the point. The point is that dangerous or unacceptable behavior by business leaders is never good for a company. On the other hand, some leaders manage to turn their psychopathic traits into a dogged, but ethical, determination to succeed. MacDonald reports, “Successful psychopathy is a controversial idea — but it’s not a new one. In 1941, American psychiatrist Hervey Cleckley was among the first to highlight this paradoxical condition in his book The Mask of Sanity. … In a 1946 article, he wrote that the typical psychopath will have ‘often outstripped 20 rival salesmen over a period of six months, or married the most desirable girl in town, or, in a first venture into politics, got himself elected into the state legislature’.” A few years ago, Judith Ohikuare (@ohikuare) wrote a story about James Fallon, a neuroscientist, who was shocked to discover he has the brain of a psychopath.[6] Despite his genetic makeup, Fallon grew up to be, in his own words, “A family guy, successful, professional, never been to jail and all that.” Fallon went on to say, “So, what is that edge where somebody’s got these traits, and they are impulsive? What puts one guy on a pathway to becoming an attorney or successful in general, and the other one has life in prison? We just have to find out what that edge is. I think we will have parameters to work with, but it’s not the same for everybody.” It will be interesting to see if this latest study sparks more interest in the subject of psychopaths in the supply chain (or business in general). No one wants the boss to knock on their office door with an axe and say, “Here’s Johnny!”