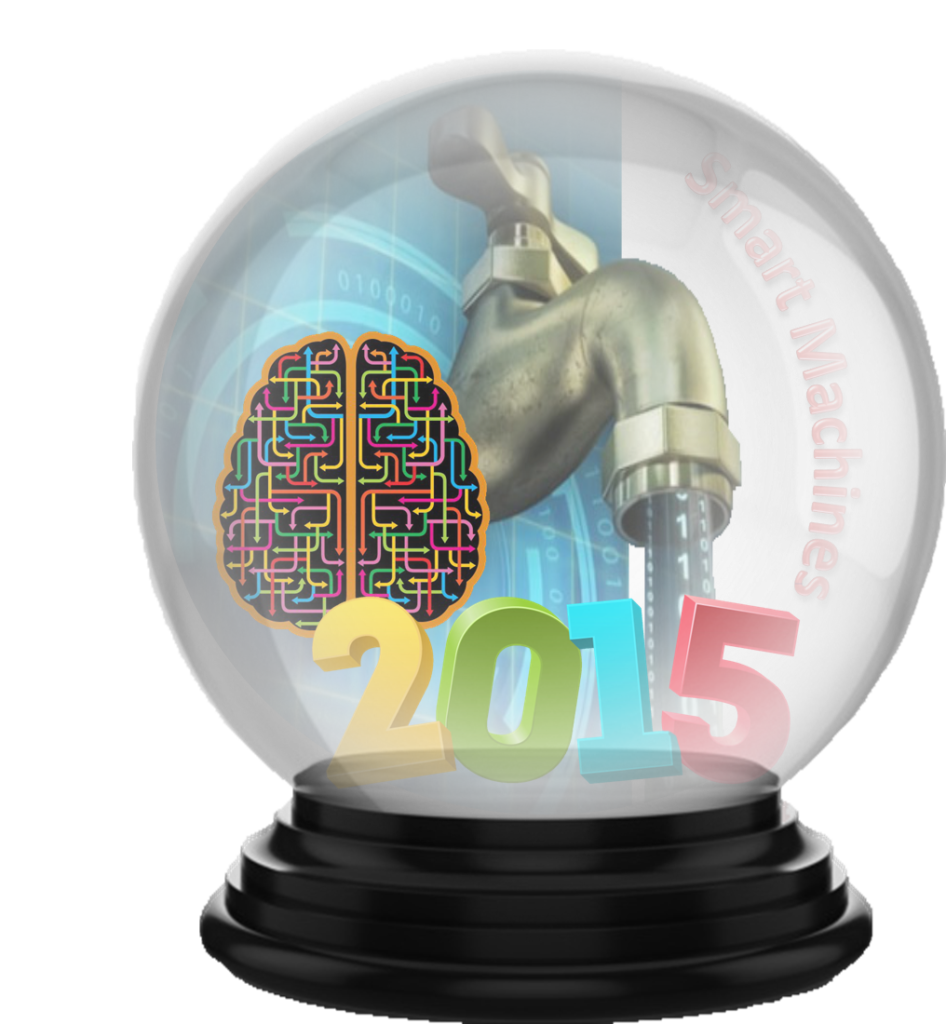 In a previous article entitled “IDC Inaugurates the 2015 Prediction Season,” discussed predictions about technology made by analysts from the International Data Corporation (IDC). At the heart of those predictions is something they call the 3rd Platform, a framework that supports the advancement of information and communication (ICT) technologies. The 3rd Platform, according to IDC, is “built on the technology pillars of mobile computing, cloud services, big data and analytics, and social networking.”[1] IDC analysts assert that there are six “innovation accelerators” that are supported by the 3rd Platform. They are: robotics; natural interfaces; 3D Printing (aka, additive manufacturing); the Internet of Things (IoT); cognitive systems; and next-generation security. IDC doesn’t rank those accelerators, but if it considers them equal, I would argue that cognitive systems and the Internet of Things are first among equals. In general, machines are labeled smart when they are connected to the Internet of Things (IoT) and, as a result, are able to react in real-time (or near-real-time) to inputs from internal and/or external data and learn by analyzing that data. “Gartner, Inc. forecasts that 4.9 billion connected things will be in use in 2015, up 30 percent from 2014, and will reach 25 billion by 2020. The Internet of Things (IoT) has become a powerful force for business transformation, and its disruptive impact will be felt across all industries and all areas of society.”[2]

Although 25 billion “connected things” by 2020 might sound a bit hyperbolic, Gartner is, in fact, on the conservative end of the spectrum when it comes to forecasts about the size of the of the IoT. Last year Karen Tillman reported that Cisco believes there will be “more than 50 billion things … connected to the internet by 2020.”[3] Even further to the right is Morgan Stanley. Tony Danova (@tonydanova) reports, “A separate analysis from Morgan Stanley feels that number can actually be as high as 75 billion, and also claims that there are 200 unique consumer devices or equipment that could be connected to the Internet that have not yet done so. There’s no reason to doubt that devices connected to the Internet of Things will soon be flooding the mass market. We’ll see compact, connected sensors and actuators make their way onto everyday consumer electronics, household appliances, and on general infrastructure.”[4] Judging by the devices featured at this year’s 2015 Consumer Electronics Show, connected devices are indeed poised to flood the market (see my article entitled “The Rise of the Internet of Things”).

So what’s the big deal about billions of connected devices? Jim Tully, vice president and a distinguished analyst at Gartner, states, “The digital shift instigated by the Nexus of Forces (cloud, mobile, social and information), and boosted by IoT, threatens many existing businesses. They have no choice but to pursue IoT, like they’ve done with the consumerization of IT.” Gartner’s “Nexus of Forces” is the equivalent of IDC’s “3rd Platform.” It doesn’t take a seer to figure out that billions of devices connected to the IoT are going to be generating enough data to make it look like the data faucet has only been dripping until now. The faucet is about to be opened fully. If companies think that dealing with big data has been a challenge up to now, stand by. Brian Proffitt (@TheTechScribe) writes, “The rise of the Internet of Things means billions of physical objects will soon generate massive amounts of data 24 hours a day. Not only will this make traditional search methods nearly impossible to use, it will also create an environment where instead of looking for things in the world, those things will be seeking us out to give us all sorts of information that will help us fix, use or buy them.”[5] This is where cognitive computing comes into play.

Smart machines aren’t smart simply because they are connected. They are only smart if they learn along the way. Margaret Rouse (@WhatIsDotCom) explains, “In general, a smart machine is an intelligent device that uses machine-to-machine (M2M) technology.[6] She continues:

“Smart machines include robots, self-driving cars and other cognitive computing systems that are able to make decisions and solve problems without human intervention. Smart machines will be digital disruptors because of the effects — both positive and negative — they will have on society. In business, the competitive advantages these technologies are capable of providing may bring higher profit margins and lead to more efficient manufacturing processes.”

Since humans are going to have to work with and around smart machines, companies (and the people they employ), are going to have adapt to this new world. Although the IoT mostly involves machine-to-machine communication, some smart machines are specifically designed to communicate with and help human decision-makers. Thomas H. Davenport (@tdav), a Distinguished Professor at Babson College, indicates that his “current passion” involves “the human role in working with intelligent/cognitive/smart/automated systems.”[7] Davenport, like most bright people, likes talking to other bright people. One such “smart person,” is “James Taylor — not the singer but the expert on automated decision systems.” Davenport writes that Taylor reminded him, “It’s a lot easier to figure out the human role in dealing with automated decisions if you have a good sense of what the decision is you are trying to automate. … If you have an inventory of your decisions, you can be much smarter about where to apply some type of automated system.”

As I have repeatedly stressed in previous articles, good solutions always begin with good questions. Davenport puts a neat twist on this idea. His “inventory of decisions” starts the solution process by assessing exactly what kind of decisions need to be made, which decisions can be automated, and which decisions need human intervention. Davenport writes, “What we as a society are doing, however — as we tend to do — is starting with the technology.” He continues:

“They get excited about machine learning or natural language processing or Big Data analytics, and they jump into a project. They don’t have a set of decisions from which to choose in thinking about these technologies, and they haven’t thought carefully about each decision to which they want to apply technology. When companies do consider the human impact of decision automation at all, they are typically trying to eliminate humans altogether in order to reduce cost. They don’t seem to realize that even if you reduce the amount of human labor in a decision, there are still some tasks and roles that are best played by a human.”

Davenport goes on to explain that there are all kinds of smart machine technologies being created to help decision-makers and that is causing a lot of confusion. He explains:

“The other problem here is that there are a lot of different technologies to choose from, and the categories increasingly overlap. James Taylor works with business rule management systems and decision modeling tools, and I have primarily focused on analytics. But the entire category is exploding, with unclear boundaries. What do we even call the category? Is it cognitive computing, machine learning, artificial intelligence, decision management, analytics, Big Data, complex event processing, case management — the mind boggles at all these software domains and how they relate to each other. Mr. Taylor and I agree that what the world ideally needs is a clear taxonomy of decision types and the technologies that support each one. That would be difficult to create, however. Short of that, a simple inventory of decisions that an organization needs to make, and some of the attributes of each decision, would be very helpful.”

I agree with that assessment. When my company, Enterra Solutions©, engages with a client, the first thing we try to do is find out what kind of questions need to be answered and which of those decisions can be automated and which ones need human intervention. We are currently engaged in pathfinding efforts that are delivering Cognitive Reasoning Platform™-based solutions to leading consumer product industry companies. These efforts involve the use of cognitive computing to automate data-based decisions currently made by human planners. Since this is an article about predictions, I predict that cognitive computing will eventually emerge the winner in the technology game because it can incorporate so many of the other categories listed by Davenport. Cognitive computing can adapt to both machine-to-machine activities and to machine-to-human activities. As Charles Darwin showed, it is not the strongest but the most adaptive species that survive.