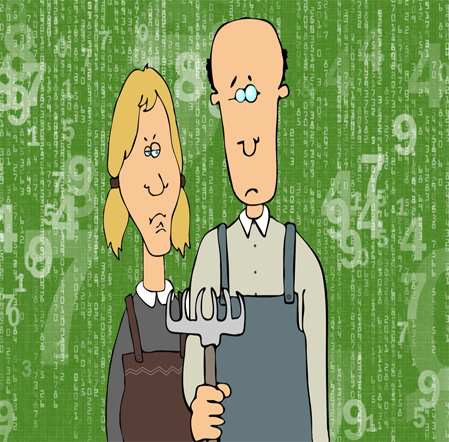 Agriculture is one humanity’s oldest professions. Many scholars trace the birth of agriculture to the Neolithic (or new Stone Age) period around 10,000 years ago. During that period, humanity began its transition from being hunter gatherers to farmers. TimeMaps states, “The coming of farming is often called the ‘Neolithic Revolution’. … It is important to note that the Neolithic Revolution also gave rise to a second kind of economy, based on the raising of domesticated animals (sheep, goats, cattle, pigs, horses and so on). This is called pastoralism.”[1] Some analysts believe we are on the cusp of new revolution in agriculture — a technological revolution. If true, the latest revolution will arrive in time to help feed the world’s growing population, which is expected to peak in a few short decades at more than 9 billion people. Scheherazade Daneshkhu writes, “To cope with population increase, agriculture must become smarter and less wasteful.”[2] She adds:

“The UN estimates a global increase of 2bn people to 9bn by 2050, when agricultural consumption is likely to be 60 per cent higher than it was in 2005. Feeding this growing population ‘while nurturing the planet will be a monumental challenge’, according to the UN’s Food and Agriculture Organisation (FAO). … The challenge now is to grow more food on existing farms because the area of new land suitable for agricultural cultivation is limited. The amount of land cultivated for arable crops expanded by 14 per cent between 1961 and 2007, but there will only be another 10 per cent of new land available in the next 40 years, according to figures from the FAO and Rabobank, a Dutch co-operative lender.”

The Challenge of Small Farms

The requirement for a dramatic increase crop yields from a limited amount of arable land is a monumental challenge. When most people think about technology and agriculture (be it farming or pastoralism), visions of large corporate-run farms probably come to mind. But agri-business is not the only area on which technology should be focused. Patrick Struebi (@patrickstruebi), Founder and CEO of Fairtrasa, reminds us, “About 2.5 billion people worldwide depend on small-scale farming for their livelihoods. They manage 500 million farms, account for 70% to 80% of food production in many parts of the developing world, and are already a key source of food supply globally. Yet about a billion small-scale farmers live in absolute poverty, and many others are trapped in a vicious cycle of absent opportunity.”[3] The technological revolution in agriculture also needs to reach these small farms if we are going to feed the world. Struebi believes it can be done. He explains:

“The technological advances of the Fourth Industrial Revolution will improve aspects of the current food system. We’ll use technology such as precision planting and irrigation techniques to improve yields organically. The speed, efficiency, and sustainability of transport will improve radically. Mobile information technologies will improve farmers’ understanding of the land they are farming and the markets they are selling to, while also allowing them to communicate with and learn from each other. And we cannot underestimate the importance of advances in communication, education, and finance to farmers and their communities. … Fundamental to the revolution will be new, innovative, visionary business models that alter systems on a grand scale. The truly massive numbers of small-scale farmers who remain marginalized, and the equally massive numbers of consumers who want healthy, sustainable food but do not have affordable access to it, is a sign of a problem in the system. It is also a sign of a huge opportunity — the opportunity to create a solution that is truly win-win-win. This solution, enhanced by the technological advances of the Fourth Industrial Revolution, would make it radically easier for small-scale farmers in the developing world to receive customized development support and, when ready, to be included in the global food supply chain. It would make healthy, sustainable food more affordable and accessible to people around the world. But most importantly, it has the potential to contribute significantly to solving the how-to-feed-the-world challenge we are faced with.”

Whether this radical new business model will emerge in developing countries remains to be seen — but we don’t have much time to put it in place. Daneshkhu reports that even without a radical business model change there are ways small farmers can be helped. She explains, “Bain, a consultancy, points out that micro-drip irrigation systems, drought-resistant hybrid seeds and asset-backed microloans can completely change the livelihood of farmers with less than two hectares of land who earn less than $4 a day.”

Perhaps the biggest opportunity for the agricultural sector is the collection and analysis of data. Farmers have concerns about how data collected from their farms is used by others, but the upside potential to help farmers seems much larger than potential downside concerns. David Sparkes (@sparkes_david) reports, “Agriculture is on the cusp of a ‘big data’ revolution that will change the way information is gathered and shared. … Big data is a concept more often discussed in relation to Silicon Valley or online marketing, but that potential for vast bodies of farming data to be collated in central databases is just starting to emerge.”[4] The collection of data also makes artificial intelligence (AI) available to the agricultural sector. In the following video, Neil Jacobstein, Artificial Intelligence & Robotics Co-Chair at Singularity University, explains how artificial intelligence can make valuable contribution to agriculture.

Jeremy Hsu (@jeremyhsu) writes, “The story of farming in the last century includes many examples of automated machinery boosting agricultural productivity and reducing the need for human labor.”[5] For example, robotic milkers have been used on dairy farms for years, but putting robots into fields and orchards has been more of a challenge. Nevertheless, Hsu reports “[The] worldwide market for agricultural robots … was worth approximately $3 billion by the end of 2015, according to a report by the market intelligence firm Tractica. Forecasts suggest the market could jump to almost $17 billion by the end of 2020 and nearly $74 billion by 2024.” If indoor farms continue to be created, they will be highly automated. “There’s a revolution happening in the way food is grown around the world,” writes Molly Fosco (@MollyFosco). “Vertical farming stacks crops on top of one another in a climate controlled, indoor facility, and utilizes advanced technology to produce food in the most environmentally friendly way the world has ever seen.”[6] She reports, “There are now vertical farms in Canada, Panama, the U.K. and all around the U.S.” Andy Szal reports that Japan is already creating “the world’s first robot-operated farm.”[7] He reports:

“Kyoto-based vegetable company Spread currently produces more than 7 million heads of lettuce annually on its indoor hydroponic farms. Indoor farming offers a wide array of benefits, from improving water and soil use to preventing weather-related problems and pesticide use. It also allows for automated control of indoor conditions. By 2017, however, Spread hopes that robots will also be responsible for seeding and harvesting, effectively creating the world’s first entirely robotic farm.”

Hsu reports that robotics is not limited to large operations. “Although many farming robots are used on large, industrial-scale operations,” he notes, “they can also make sense for smaller agricultural businesses such as Japanese strawberry farms. This is because agricultural labor is both scarce and expensive in Japan, where the average ag worker is over 70 years old. Such high labor costs have already made a strawberry-picking robot as cost-effective as human workers.”

The challenge of feeding the world’s population in the future requires numerous strategies — not all of them related to technology. Technology, however, will play a large role in ensuring that we use farmland wisely, reduce the amount of water needed to grow food, and protect the environment. Ensuring that the world’s subsistence farmers are included in the coming agricultural revolution is also essential.