I have continued to ponder about Dr. Yaneer Bar-Yam’s article, “Complexity Rising: From Human Beings to Human Civilizations, a Complexity Profile,” especially the attached figure. 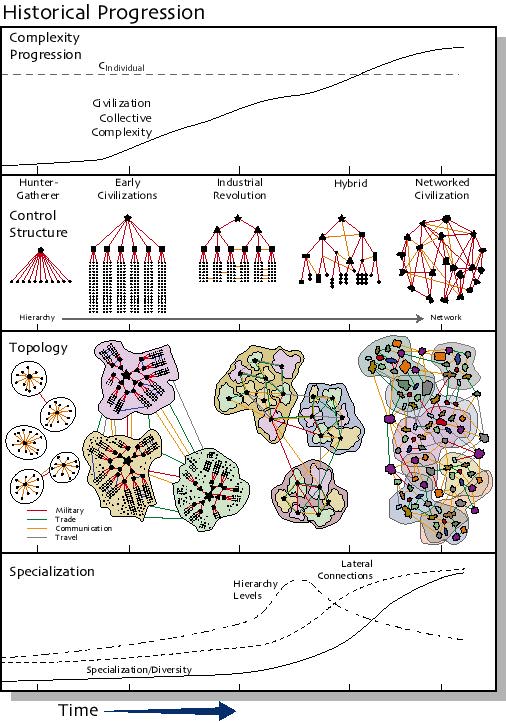 The second frame of the figure depicts increasing complexity as one moves from hierarchies to networks. The third frame attempts to depict even more complex topologies as various networks connect and interact. Since Bar-Yam describes human civilization as a kind of super organism, it is not surprising that these topologies have an amoeba-like quality. The most complex of his topologies depicts what I refer to as the global information grid. This is not to be confused with the Department of Defense’s Global Information Grid, which is global only in the sense that the U.S. military uses it around the world. The global information grid to which I refer includes all nets and all connections. The vastness of the grid, the enormity of its content, and the volume of its transactions are almost too great to imagine. The question is how does one maintain some sort of coherence in such a networked civilization?

I believe Bar-Yam lays out a clear and present need for automated rule sets that provide dynamic governance throughout the grid. I use the word “governance” with some hesitation since it conjures up images of big brother trying to exercise control of the grid. That is definitely NOT what I mean. I’m referring to a set of automated rules that help harness the power of the global information grid and optimize its operation. Every civilization has formal and informal rules that help it advance and avoid chaos. Automated rule sets would contain the minimum, agreed upon protocols necessary to make the networked civilization — for want of a better term — civil. As Bar-Yam writes:

Bar-Yam posits that mankind sits on the cusp of a new networked civilization which will require new structures, new rules, and in some areas, a new culture. I’m convinced that automated rule sets will be a part of this new structure. In order to maximize the benefits of this new civilization, a way has to be found to interweave

1.      Business Logic (in the form of automated rules sets);
2.      Cognition (autonomic rules sets and it capabilities); and
3.      Technology (autonomic hardware, software and architectures SOA’s on steroids)

to create a new architectural construct that allow us to move from metaphorically building physical structures with roman arches with limited height and width to building structures with suspended floors to create skyscrapers. I posit that you can blend business logic, cognition and technology into one strand of technology DNA to create new architectural designs that get to the core of what I refer to as Global Enterprise Resilience – making governmental agencies, corporations and transnational organizations resilient to attack from asymmetric threat actors and systemically able to exploit opportunities and able to systemically adapt to a rapidly changing environment within the next wave of globalization.

I continue to struggle with what to call this event horizon. I like the term “singularity,” because it means bringing together various parts to form something completely different — in this case, a technology architecture. But Ray Kurzweil has co-opted it to refer to the moment when computer intelligence exceeds that of the humans who created it. The future, according to Kurzweil, then becomes completely unpredictable with the possibility of a human/machine merging generating a new transhuman species. I am talking about an event that transforms the structures with which humans interact rather than transforming the humans themselves. I’ve also toyed with the term “convergence” and lacking a better alternative will probably settle on that.

Within the next days or weeks, I hope to expand on this notion of convergence and will post it as my first “Thought Probe.” Thought Probes will be posts that focus on a new concept in hopes of eliciting comment and discussion. The reason I believe this convergence is inevitable is nicely summed up by Bar-Yam:

The “demands upon the control” of the global information grid will be far too great for any group or groups to keep up with. Autonomic transactions, governed by automated rule sets, will be required to ensure that everything runs smoothly and the grid is able to grow unfettered. Any other approach will place unnecessary limitations on the operation and potential of the grid and, hence, unnecessary limitations on the potential of the networked civilization as a whole. Without automated rule sets to help maintain the grid, its resilience will also be limited.

Bar-Yam stresses that history demonstrates a clear pattern of growing complexity. That pattern is not about to change. Complexity will continue to grow and at an accelerating pace. We are going to need help to keep up with these changes. This is where Kurzweil and I agree — the power of computers will help us harness the power of this complexity.