We Have All the Necessary Technologies to Make Our Cities Smarter

“A veritable ‘perfect storm’ of challenges and opportunities is profoundly changing the fundamentals of urban areas throughout the world,” asserts an article in Peak Oil. “The driving force is the exploding growth of urban populations caused by both global population growth combined with dramatic relocation to urban centers. The United Nations predicts a near doubling of city dwellers by 2050 as the global population increases from 7 billion to 9 billion with the urban population to grow between 2.5 billion and 3 billion people in the next 30 years.” [“Smart cities and the smart grid,” 25 May 2014] If you sense some urgency in that paragraph, you are not alone. Urban planners around the globe are working feverishly to try and figure out how new urbanites are going to be housed, served, transported, and employed. People have rediscovered that cities can be vibrant places to live and work; but, years of neglect have left many cities ill-equipped to handle a surge of new residents. To prepare for the perfect storm described above, many planners are looking at smart city initiatives to help them use limited resources more efficiently and effectively. The Peak Oil article states:

“Within each urban area, it becomes more difficult to procure and manage the necessities of life and business — housing, transportation, water, fuels, electricity, communications, information, education, products, services — while at the same time maintaining and improving economy, efficiency, sustainability, reliability, security, health, and safety. Fortunately, exponential improvements in the performance versus cost of electronics, telecommunications and information technologies are making it possible to address these complexities and challenges.”

The good news, according to technologist Tom Armitage, is that we don’t have to start from scratch and design new systems for transportation, water, fuels, electricity, communications, etc. He notes, “By overlaying existing infrastructure with intelligent software and sensors, you can turn it into something else and connect it to a larger system. Yes, you could simply design and construct an entirely new system, but that’s incredibly expensive, it would take a lot time, and you may lose some things (of cultural or architectural value) that you may want to save. It’s better to adapt existing systems to your goals if you have the technology to do it — and we have it.” [“Most Of What We Need For Smart Cities Already Exists,” by Glen Martin, Forbes, 1 May 2014] Sue Lebeck, another self-described technologist, believes that the best place to start making a city smarter is by applying technology to water and electrical power resources. [“How do you build a smart city? Start with energy, tech, water,” GreenBiz, 14 May 2014] I agree with her. For years I have been interested in efforts to help struggling countries develop faster. I’ve concluded that access to safe water and reliable electrical power are the sine qua non of economic growth. The Peak Oil article agrees. It states, “Everything else in an urban area requires economical, reliable and sustainable electric power and energy.”

In her article, Lebeck included a very interesting graphic that shows city responsibilities and how technology can help cities better meet them (see attached image). 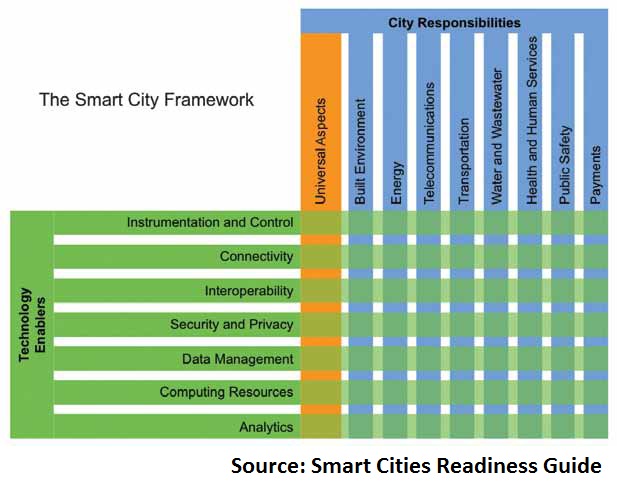 Since water and electrical power systems are the best places for a city to start to make itself smarter, I’d like to concentrate on them. Let’s start with energy. The Peak Oil article reports:

“In the U.S., … until recently, some 3,000 monopoly electric utilities exclusively provided power and energy to about 140 million metered customers from just over 10,000 generating plants through a nationwide patchwork of synchronous AC grids. The underpinnings of this century-old industry model had begun to fray in the 1970s and continued to erode ever more rapidly. Now, the grid is undergoing a radical transformation in which energy production, monitoring and control is moving away from the generation and transmission center to the distribution edges. If only a few percent of electric utility customers in the U.S. deploy these, there will be millions of them at the edges of the grid. This is happening even more rapidly in the majority of the world, the developing economies, which could not deploy the kind of monolithic, centralized grid infrastructure that exists in the smaller, less-populated developed economies. Over the next decade or two, throughout the world many millions of distributed energy production, storage and management systems will be deployed at the ‘Grid Edge’. There will eventually be hundreds of millions, even billions of end-use devices that are equipped with autonomous intelligence and automation to optimize the economy, sustainability, reliability, and security of the electric energy economy. How can something this complex and stochastic be accommodated? It will be made possible through the electronics, telecommunications, and information technologies mentioned above … more specifically, it will be via the Internet of Things. Ditto for the many other kinds of infrastructure and services in urban areas.”

Armitage agrees that the Internet of Things is going play a vital role in making cities smarter. Jesse Berst, founder and Chief Analyst of SGN and Chairman of the Smart Cities Council, explains that a “smart grid” is going to a major player in the Internet of Things. He notes that a smart grid is “an electrical grid that’s integrated with a computerized, two-way communication network. … It provides instantaneous feedback on system operations, outages and end use. It uses that real-time monitoring to optimize its performance and anticipate problems. It can also isolate parts of the network to prevent small-scale interruptions from turning into region-wide blackouts.” [“Smart grid 101: Smart grid benefits for consumers,” Smart Grid News, 10 January 2014] He goes on to list some of the benefits of implementing a smart grid:

Although installing a smart grid can be expensive, Berst notes, “For every dollar spent on a smart grid, the return is conservatively between $2.80 and $6.00.” That’s not a bad ROI. Turning to the water challenge, there have been an increasing number of studies that assert that water shortages are going to become critical in the years ahead. Life cannot be sustained without water. Obtaining to and distributing water within an urban environment is a complex task. Lebeck reports, “At the energy/water nexus, the Thirsty Energy initiative of the World Bank ‘aims to help countries begin the process of co-managing their electric and water planning.’ Kate Zerrenner reports, ‘This new initiative aims to address the interconnection between energy and water head-on by providing countries with ‘assessment tools and management frameworks’ to help governments ‘coordinate decision-making’ when planning for future energy and water infrastructure.'” Haggai Scolnicov, TaKaDu’s CTO, indicates that there are four myths that represent obstacles to developing smart water systems. [“The Smart Water Network Revolution: Speaking at Intelligent Cities about Data Driven Networks,” The Water Monitor, 18 November 2012] They are:

“In 2010 and 2011, every household in the city got a new water meter. The city’s water utility partnered with IBM on the project to help evaluate the data coming from the new meters and to gain a deeper understanding of water consumption. Results from Dubuque’s year-long pilot study, which tracked a portion of residential customers who used a related Web portal, showed the following:

Based on these results, the water utility estimated it could achieve a 6.6% overall decrease in water usage and an 8-fold increase in leak detection and response. Moreover, the data indicated the annual overall savings could be $191,000 across the system.”

Perhaps the most important data point reported by Strother is the one concerning leak detection and response. The United Nations estimates that between 66-132 billion gallons of drinking water leaks from the supply systems in many mega cities each year. An 8-fold improvement in leak detection and response could make a significant impact of the world’s water supply in the years ahead.

As I have pointed out in other posts about smart cities, there is a lot more to making cities smart than the implementation of technology and Big Data analytics. Cities need to be livable, not just smart. The smart part relates to how well urban governments, companies, and residents use the resources that they need. Technology plays an essential role in helping them do that. The important point here is that cities don’t need to wait to get smarter. I agree with Armitage that technologies are available if we are willing to use them.