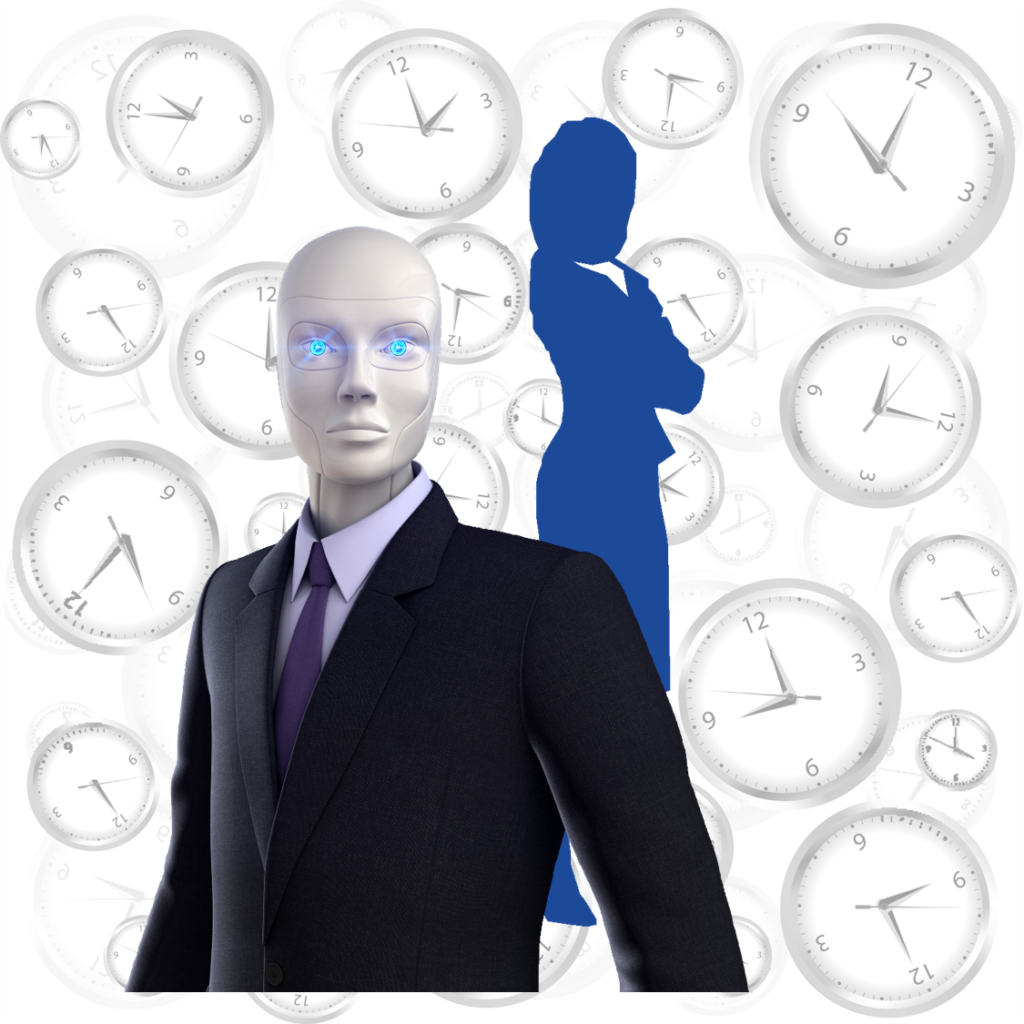 “By 2021,” writes Forrester Vice President Brian Hopkins (@practicingEA), “a disruptive tidal wave will begin. Solutions powered by AI/cognitive technology will displace jobs, with the biggest impact felt in transportation, logistics, customer service, and consumer services.”[1] Hopkins’ prediction is contained in a report released by Forrester that predicts up to 6% of jobs currently filled by humans will be lost to automation over the next five years. For anyone concerned about jobs sustainability, the report should spur them to action. I’m not talking about some Luddite response to technology; rather, I’m talking about developing and implementing a rational strategy for transitioning to a hybrid workforce. If massive layoffs are the result of an uncontrolled effort to automate jobs, the only possible result is economic chaos and social unrest — neither of which are good for business.

How Big is the Jobs Sustainability Challenge?

Although no one can predict with precision how the future of work will unfold, Forrester analysts are probably spot on concerning the economic sectors most likely to be affected first. If their numbers are correct, the jobs sustainability challenge could be huge. Commenting on the Forrester report Olivia Solon (@oliviasolon), observes, “AI-based services and apps will eventually change most industries, resulting in a redistribution of jobs.”[2] Greg Price (@GP_IBTimes) reports, by some estimates, the Forrester prediction is conservative. He writes, “The idea of robots and other AI replacing humans is nothing new, and many reports this year have made similar predictions but with far more striking figures [than the Forrester report]. According to Digital Trends, researchers at the World Economic Forum predicted that between 2015 and 2020, 7.1 million jobs could be lost to robots or AI and many will be from ‘the Office and Administrative job family’.”[3] Connor Forrest (@ConnerForrest) adds, “Few trends in technology have caused the level of panic and uncertainty in the job market as artificial intelligence (AI). The impending ‘robot revolution’ has brought questions about what jobs, if any, will be replaced by bots, and when it will happen. While some have posited that robots will replace nearly all jobs, and free up humans to work on more creative endeavors, others have been more reserved in their predictions.”[4]

Let me be clear. Jobs ARE going to be lost as technology improves and automation changes the business landscape. Price reports, “The predicted move toward robot labor has already been executed by Apple and its rival Samsung. BBC reported in May that China-based Foxconn Technology Group, one of Apple and Samsung’s main suppliers, cut down its workforce from 110,000 to 50,000 by using more robots.” More recently, Robbie Whelan (@RWhelanWSJ) reported that Target is moving to eliminate warehouse jobs. “The objective in automating warehouses,” Whelan writes, “is controlling the three big costs of conventional human-staffed distribution centers — labor, time and real estate — to meet the demand of the high-cost, low-margin industry.”[5] Technology has always aimed at relieving humans from backbreaking or tedious work and that historical trend is not going to end.

Not everyone believes that automation will be the job killer predicted by the doomsdayers. Andrew C. Oliver (@acoliver), Manager of Technical Enablement at Lucidworks, writes, “Wide-scale automation will require a lot of infrastructure investment to accomplish. A lot of it will happen relatively soon. Yes, smart machines will be able to drive, load trucks, and maybe suggest the caffeine I want. Even coding jobs may be eliminated. But creativity and that organic ‘leap’ to new ways of thinking will always give artisans a place. There will always be the performance arts. There will always be sticky situations that are hard to pre-program and the people who need to figure out the algorithms or techniques to train machines to do these things. More jobs? Probably not. But fewer of the old ones may go away than you think.”[6] Even Oliver’s pessimistic view that more jobs won’t be created in the future is not certain. Many other pundits believe new technologies will create more jobs. For example, Narae Kim (@nkim132) reports that Goldman-Sachs believes the historical pattern of technology creating more jobs than it destroys will continue. She writes, “The rise of automation, online tools, and big data echoes industrial revolutions of the past, with occupations and businesses following a ‘natural evolution’ as technology advances, the bank argues. While the transition can be painful, it can also be helped along by new policies seeking to better share the temporary discomfort of rapid tech-driven change.”[7]

Jobs won’t be Saved without Active Participation of all Stakeholders

Kim’s last point is important. Yes, the transition to the hybrid workforce of the future will be painful; but, the right strategies supported by thoughtful policies will help. It is imperative that jobs sustainability becomes a priority for governments, academics, think tank analysts, business leaders, and labor representatives. The world needs to avoid the social unrest and economic chaos that could result if the jobs challenge is ignored. In an interview about the Goldman Sachs’ report, Sandra Lawson, director of Goldman Sachs Markets Institute, stated, “The fact that technological change and innovation affects everybody across the political spectrum and the social spectrum means that there is a lot of focus on finding new approaches to bear the risk and to help people adapt.” Unfortunately, not enough priority is being given to jobs sustainability. Brookings Institution analysts Jack Karsten (@jtkarsten) and Darrell M. West (@DarrWest) write, “Emerging technologies like industrial robots, artificial intelligence, and machine learning are advancing at a rapid pace, but there has been little attention to their impact on employment and public policy.”[8] Two of the more promising strategies being discussed focus on the creation of new jobs (with attendant retraining and reskilling of workers), and encouraging companies to augment rather than replace workers with new technologies. Jeff Selingo (@jselingo) observes, “Previous changes in the nature of work all required massive policy shifts in education. Universal high school started at the beginning of the 19th Century in the move from the farm to the factory. The move from the factory to the office in the 1960s and 1970s required education after high school and began the universal college movement.”[9] Kim adds, “Since the risks are often too big for individuals to bear, institutions and governments should play a more active role in smoothing out the bumps created by a rapidly-changing jobs market. That could include offering tax credits for corporate job training or creating regulations that support the growth of the so-called ‘freelance economy’.”

Jobs sustainability could be one of the biggest challenges society faces over the next few decades. Personally, I believe that human/machine collaboration will characterize the future and society will be better off because of it. Nevertheless, a future that includes a bright employment picture is not inevitable. It will take the concerted efforts of all stakeholders. Unfortunately, there is not a lot of time available to get policies right nor to implement effective strategies.

Footnotes
[1] Harriet Taylor, “AI will eliminate 6 percent of jobs in five years, says report,” CNBC, 12 September 2016.
[2] Olivia Solon, “Robots will eliminate 6% of all US jobs by 2021, report says,” The Guardian, 13 September 2016.
[3] Greg Price, “Robots May Be Taking Over Your Job Soon,” International Business Times, 13 September 2016.
[4] Conner Forrest, “Why the number of jobs that will be replaced by robots is lower than you think,” TechRepublic, 14 September 2016.
[5] Robbie Whelan, “Fully Autonomous Robots: The Warehouse Workers of the Near Future,” The Wall Street Journal, 20 September 2016.
[6] Andrew C. Oliver, “Artificial intelligence: Not the job-killer you fear,” InfoWorld, 8 September 2016.
[7] Narae Kim, “Goldman Sachs Isn’t That Worried About Technology Destroying Your Job,” Information Management, 19 September 2016.
[8] Jack Karsten and Darrell M. West, “How robots, artificial intelligence, and machine learning will affect employment and public policy,” The Brookings Institution, 26 October 2015.
[9] Jeff Selingo, “What Happens When Millions of Jobs Are Lost Because of Automation?” LinkedIn, 17 August 2016.