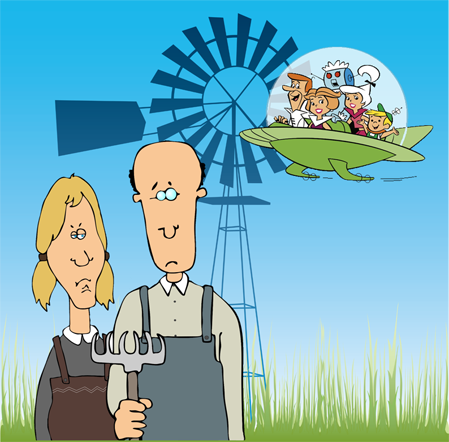 Agriculture: The Jetsons Meet the MacDonalds

The topic of agriculture generally brings to mind scenes of waving grain, orchards of fruit trees, and/or animals grazing peacefully in fields. Children never sing, “Old MacDonald had a farm, E-I-E-I-O, and on that farm he had a robot, E-I-E-I-O.” In the coming years, that may change as technologies more associated with the Jetsons than with the MacDonalds find a place on the farm. Rich Cooper, the former vice president of research and emerging issues at the U.S. Chamber of Commerce Foundation, writes, “Farming is hard work — really hard. It’s not just the backbreaking labor and long hours. Farmers are some of the private sector’s biggest risk takers. Each season, they invest hundreds of thousands of dollars before a seed ever touches the soil, and come harvest time, there is no guarantee they will be in the black. There are so many variables involved — from weather patterns to soil composition to consumer demands — that you might call successful farming as much an art as a science. It can also be a gamble. Today, however, there are new innovations in U.S. agriculture that take some of the guesswork out of farming.”[1] New technologies hold the potential of easing the hard work and reducing the gamble.

Big Data and the Internet of Things

Cooper notes, “Where farmers of previous generations may have relied on old almanacs and passed on family notes to record the happenings of the land they worked, many farm machines in use today collect troves of crop and soil data in new and mind-blowing ways. Sensors, imagery and other technologies are all working together to give farmers details about soil content, weeds and pests, sunlight and shade, and other factors. When analyzed, it can help them adjust their activities during planting season so they can reap bigger rewards during the harvest.” An NPR report adds, “The next revolution in agriculture could center around big data, also called precision farming. The idea is that all the information about what goes into and comes out of fields could help growers make better decisions.”[2] As climate change continues to impact agriculture, big data analytics are poised to become even more important. Helen Clark observes, “Considering that there are predictions of massive crop yield fall offs in the coming decades thanks to climate change, … predictive computer modelling is going to become increasingly necessary.”[3] As more and more sensors find their way on to the farm, they will be connected via the Internet of Things (IoT), a machine-to-machine network predicted to generate exponentially more data than has been gathered in the past. Cooper explains, “A few large seed and agriculture companies (such as Monsanto and John Deere & Co.) have thrown their weight behind services that collect data from farm machines and pair it with other data sets, such as weather trends, the surface and shape of the land, and past harvest yields. While individual farmers can review their own data, these large companies have access to satellite information, historical patterns and statistical experts who can put sophisticated algorithms to multi-farm data sets. This allows these companies to tell farmers exactly how to improve planting — even in real time — so as to maximize their harvest, giving detailed analysis down to 10 square meters of land. It is called “prescriptive planting,” and it could be one of the biggest agricultural breakthroughs in decades.” Although farmers still have concerns about sharing data with firms like Monsanto — fearing companies will use that data in ways contrary to their best interests — most analysts believe that big data in agriculture represents the future.

Robotics have been slowly introduced into agriculture. Automatic milking machines are probably the best-known example. Putting robots in fields and orchards has been more problematic since it generally requires the deft touch of humans to pick fruits and vegetables and a keen eye to know which items are ripe for picking. As the field of robotics matures, robots will undoubtedly learn to identify ripe fruits and vegetables and be sensitive enough to pick them without damaging them. The IEEE Robotics & Automation Society notes, “Recently, farmers have started to experiment with autonomous systems that automate or augment operations such as pruning, thinning, and harvesting, as well as mowing, spraying, and weed removal. In the fruit tree industry, for example, workers riding robotic platforms have shown to be twice as efficient as workers using ladders. Advances in sensors and control systems allow for optimal resource and integrated pest and disease management. This is just the beginning of what will be a revolution in the way that food is grown, tended, and harvested.”[4] There are now dozens of robots, either in develop or use, that can are intended to improve agriculture. For example, students at Massachusetts Institute of Technology have designed a mobile robot that can monitor plants, maintain soil humidity, and pick ripe fruits. “A network of sensors attached to each plant monitors the soil humidity and call the robot for water. The robot communicates wirelessly with the plant sensor.”[5] There is a potential dark side to agricultural robotics — loss of jobs. Michael J. Coren (@MJ_Coren) reports, “More than a million people working in America’s fields, and far more globally, are about to face competition from workers who never sleep, get tired or ask for a living wage. As field robots have gotten cheaper, a steady stream of farm jobs are being automated. Lettuce weeding is one of the first where the cost of robots now matches human labor, reports Lux Research in a new analysis. Although costs remain too high for robots to replace most farm work for low-value crops, it’s a taste of what’s to come.”[6]

Ben Potter writes, “Today’s tech startups … argue that AI technology will make life easier and more efficient in any number of industries — including agriculture. And ‘the future’ may arrive sooner than you might think.”[7] This should come as no surprise since big data and artificial intelligence enjoy a symbiotic relationship. Big data analytics — especially real-time or near-real-time analytics — requires artificial intelligence (AI) capabilities and AI requires lots of data on which to learn. Futurist Jack Uldrich (@jumpthecurve) told Potter that “AI and other potentially disruptive ag technologies could create a bit of a paradox on the farm.” What is the paradox? “There will be some job displacement, but it is also bringing more young people back to the farm.” The attraction, of course, is advanced technology.

Technological advances in agriculture are arriving none too soon. The world’s population is continuing to increase and feeding more people is going to require a number of strategies, including increased crop yields. Technology has the potential to help increase yields and do so in the most efficient way possible. It won’t be too long before George Jetson and Old MacDonald have a lot in common.