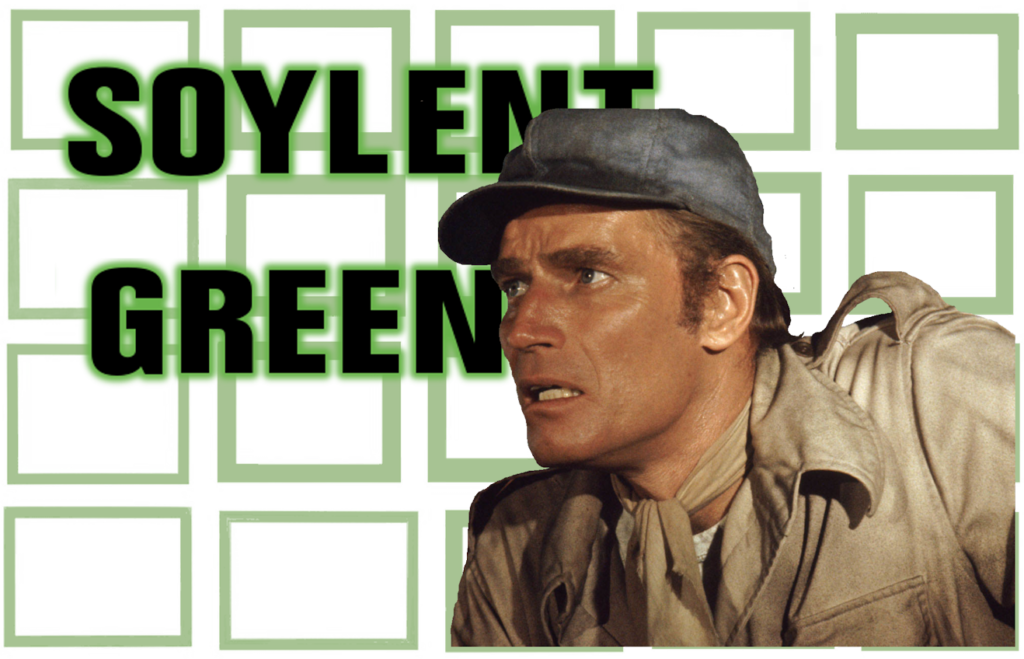 In the 1973 movie Soylent Green, starring Charlton Heston, the world is over-populated and climate change has wreaked havoc on the agricultural sector. When was this dystopian world supposed to occur? In the year 2022. In the movie, things are so bad that most people rely on eating plant-based wafers to obtain the protein they needed to survive. A giant corporation (Soylent Corp.) controls the production and distribution of these wafers: Soylent Yellow (made from soy) and Soylent Red (made from lentils). Soylent Corporation also pulls the strings of the political machinery that maintain its monopolistic business position. One of the corrupt politicians the company controls is Governor Henry C. Santini, played by the prolific character actor Whit Bissell. As a way of introducing the primary source of food (and title of the movie), an announcer states, “Governor Santini is brought to you today by Soylent Red, and Soylent Yellow. And, new, delicious, Soylent Green: The ‘miracle food’ of high energy plankton, gathered from the oceans of the world. Due to its enormous popularity, Soylent Green is in short supply, so remember — Tuesday is Soylent Green day.” Why was Soylent Green in short supply? Because the world’s oceans are dying along with everything that lives in them — including the plankton.

Why Did the Movie Get Things So Wrong?

To be fair, you might not think the movie was too off track. After all, climate change is a big deal. The agricultural sector is being adversely affected. And, the world’s oceans are getting polluted. When the movie was released, the future it depicted seemed very plausible. The late film critic Roger Ebert wrote, “Soylent Green’s real achievement is to create a 21st Century world that’s convincing as reality; we somehow don’t feel we’re in a s-f picture.”[1] He noted, “Charlton Heston plays a gritty detective who gets called in when a top official of the Soylent Corp. (Joseph Cotten) is murdered. He gets on a trail that leads to a most unappetizing conclusion — but before he gets there, the movie paints a fascinating and scary picture of population growth run wild. The detective story is mostly just an excuse to keep us interested from one end of the movie to the other.” Arizona State University professor Andrew Maynard (@2020science) notes, however, that some of the movies biggest assumptions simply proved to be wrong.[2] He explains:

“Soylent Green is a cautionary tale set in a dystopic future where corporate greed and overpopulation have led to a ravaged environment, extreme social disparity, and shocking levels of moral depravity. It’s one of the first movies to mention the ‘greenhouse effect,’ reflecting emerging concerns around human-caused climate change. It also tapped into the growing environmental movement of the time and blossoming fears around overpopulation. … Despite being underpinned by very real issues, the extrapolated future that Soylent Green portrays is deeply out of step with present-day reality. Overpopulation is not the issue it was perceived to be in the 1970s — rather, the prospect of static and declining populations is now raising concerns. The productivity of agricultural systems has been vastly extended through technologies ranging from high yield crops and advances in irrigation techniques, to innovations in agrochemicals and genetic engineering. And rather than the dystopic single-noted social, political, and culinary narratives portrayed in the film, many — including me — would argue that the world we live in has never been more diverse and full of potential.”

For a science fiction film, Soylent Green was remarkably devoid of much technology. The only on-screen computer-related tech was a very early video game. The film also overestimated inflation. You might think paying $5 for a jar of strawberry jam is a lot. As journalist Scott Bordow writes, “In the movie, the food shortage is so extreme a jar of strawberry jam is $150 and people weep at the sight of beef.”[3] And because of overpopulation, Bordow notes that only the very rich can afford houses or apartments; “everyone else sleeps in their cars — or on the street.” Although homelessness is a serious 2022 problem, it comes nowhere near the problem depicted in the movie.

Spoiler alert! Of course, the biggest thing that the movie got wrong was cannibalism. We are not yet processing dead people to harvest their protein. Bordow writes, “In the movie, the Soylent Corporation advertises that its wafers are being made from ocean plankton when in reality, all ocean life has died. Thus, the corporation throws human carcasses into waste production plants. A future reality? Let’s hope not. A cautionary tale? Perhaps.” The following video depicts one of the movies most dramatic scenes, as Charlton Heston tries to tell people the truth about Soylent Green:

Journalist Matthew Radulski reports, “In its time, Soylent Green was not a hit. … It eventually found an audience on home video and became a cult classic. The line ‘Soylent Green is people’ has remained a mainstay in popular culture. … The film did explore prescient subjects like doctor-assisted suicide, the dangers of too much time on screens, and environmental disasters. Flick on the news and you’re liable to see some report on climate change or technological danger. Even 49 years later, everyone is still terrified about what rapidly depleting resources mean for the future.”[6]

What Did the Movie Get Right?

Journalist Chris Taylor (@FutureBoy) notes that the movie is loosely based on Harry Harrison’s 1968 novel Make Room! Make Room! According to Taylor, the book depicts “a riot over Soylent steaks, a meat substitute made from soy and lentils (hence the name). Sound familiar? It should. Soy is the main ingredient in the Impossible burger, the most deliciously meat-like processed food of our age. Rival Beyond burger uses mung beans, legumes similar to lentils. Harrison arguably got it right, although there are no reports of riots when supermarkets run out of Impossible beef bricks just yet.”[4] Bordow also believes the movie accurately depicts the power of misinformation. He explains, “The Soylent Green corporation controls the world’s food supply, and in many ways, the information faucet to the 7 billion people around the world. … In doing so, the corporation protects itself from public examination or even the most cursory questioning. … It’s communication as control, and it’s magnified by today’s technology.”

The cannibalistic twist — or as Ebert put it the “unappetizing conclusion” — was not part of Harrison’s novel. According to Maynard, “Harrison was shocked by the script of Soylent Green, describing it as something that ‘transmogrified, denigrated and degutted the novel from which it had been taken.'” Maynard decries the fact that too many movies offer simplistic answers to complicated problems. He explains, “This frustration is exacerbated by the reality that we are collectively facing a growing number of increasingly complex global challenges, none of which are amenable to well-meaning but simplistic solutions. These range from accelerating climate change and declining biodiversity to cybersecurity, social injustice, geopolitics, the responsible use of powerful new technologies like AI and gene editing, and even what it will mean to be human in the future. In every case, there are staunch advocates for the ‘only’ way to get things right, and serious consequences to pursuing over-simple solutions.”

What I don’t want overlooked in this discussion is the amazing job being done by people in the food supply chain. Despite numerous problems they have confronted over the past several years, they have done a remarkable job keeping food on our tables. Have there been hiccups? Sure. But their ability to deal with challenges have been nothing short of exceptional. I think of the farmers in Ukraine who, despite seeing their country ravished by warfare, continue to grow grains to feed the world. Their efforts are heroic and shouldn’t be overlooked. Fifty years ago, many people envisioned a very dystopian world characterized by overpopulation and starvation. I tend to agree with Maynard. We live in a world of great diversity and one that is full of potential. Go out and enjoy your plant-based meat substitutes!