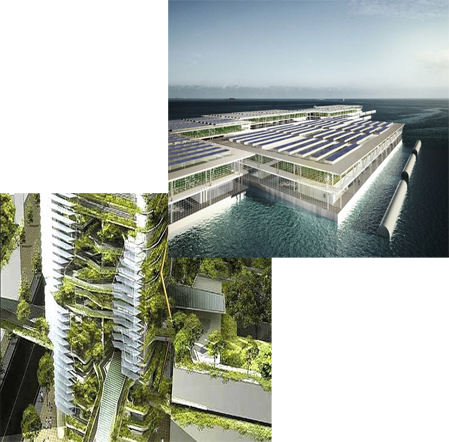 Is the Future of Agriculture Indoors and Afloat?

Few things in life are certain. We do know, however, that people have to eat. We also know that figuring out how to feed the world’s burgeoning population is a growing challenge. Three factors are exacerbating that challenge: the amount of arable land needed for agriculture isn’t growing; water scarcity could lead to conflict; and climate change continues to affect crop yields. “Producing enough food, fiber and fuel for more than 9 billion people by 2050, while conserving natural resources is a challenge that has become increasingly complex,” writes Rod Snyder (@RodSnyderWV), President of Field to Market. “In the next 35 years, experts predict that we’ll need to double agricultural production to keep pace with population growth, changing diets and increasing demand. And farmers will have to meet this challenge in the face of a changing climate with increasingly extreme weather patterns.”[1]

Sonny Ramaswamy, director of the U.S. Department of Agriculture’s National Institute of Food and Agriculture, points out the demand for food is going up, while the availability of farmland and water is going down. “Farmers,” he writes, “have no choice but to do more with less.”[2] There are several ideas floating around (no pun intended) that address the issue of decreasing farmland availability. The first idea involves floating farms. “No Land? No Problem,” writes Don Willmott. “If Barcelona-based Forward Thinking Architecture has its way, farms of the future will operate autonomously as they float on the open sea.”[3] Willmott continues:

“Stretching eco-friendly concepts to the limit, the ambitious design firm has come up with the idea of Smart Floating Farms, large triple-decker agriculture barges that feature fish farms down below, hydroponic gardens up top and solar panels on the roof to keep things running. They don’t exist yet, but they’re certainly providing plenty of food for thought. The concept hits all the current buzzwords: preservation of arable land, local organic food sourcing with less ‘food mileage,’ environmental protection, self-sufficiency and sustainability. … The most important component would be the hydroponic garden, because hydroponics doesn’t require natural precipitation, fertile land or pesticides to be effective and can serve as a model for people who live in arid regions or areas with poor soil. Hydroponic gardens can also be stacked, so they take up less space.”

As any sailor will tell you, however, the sea is not always a hospitable environment. John Anderson (@jcax01) reports that designers have thought about that problem as well. “The entire barge would be protected from the seas and bad weather with inflatable wave protectors,” Robarts writes. “Thus the farm would be self-sufficient and largely self-operating, requiring minimal labor.” Countries that can’t take agriculture out to sea might want to consider going up in the air using high-rise agriculture, which is more often referred to as vertical farming.[4] “This may surprise you,” writes Jeff DeGraff (@JeffDeGraff), “some of the biggest breakthroughs in farming aren’t happening on farms — they’re happening in big cities. The popularity of urban farming — or ‘vertical farming’ — brings new challenges to an old industry.”[5] And Ray Kurzweil, inventor, author and futurist, and a Director of Engineering at Google, states, “The next major food revolution will be vertical agriculture, in which we grow food in AI controlled vertical buildings rather than horizontal land: hydroponic plants for fruits and vegetables and in vitro cloned meat. Benefits will be profound.”[6] To read more on this subject, see my article entitled “Urban Agriculture: Feeding Them Where You Find Them.”

Prior to devastating floods that hit the Southeast as a result of Hurricane Joaquin, Steve Brachmann (@Steve_Brachmann), wrote, “As of September 1st, 2015, the only states in America which were completely untouched by unseasonable dryness were Delaware, Indiana, Missouri and South Dakota. In 46 other states, including Alaska and Hawaii, at least one county was experiencing some form of drought or abnormal dryness, according to the U.S. Drought Monitor. Eight states were experiencing extreme drought conditions, a level of drought currently wracking large swathes of six western states: Montana, Idaho, Washington, Oregon, Nevada and, of course, California. Nevada and most of California are currently in the grips of what the U.S. Drought Monitor classifies as D4, ‘exceptional drought,’ the worst possible drought conditions.”[7] Even without the vagaries of changing weather patterns, finding enough clean water to grow crops and sustain life is going to be a challenge. In fact, some analysts have predicted that many future conflicts will be about water. Since agriculture is the sector that uses the most amount of water, the solution to future water shortages will, in large measure, be found in that sector as well. As Brachmann notes, “Necessity is the mother of invention and it’s encouraging to see that there have been plenty of innovative steps taken to try and combat various aspects of the current drought.” He goes on to describe how advances in irrigation and desalination are helping address this challenge.

Climate change affects weather patterns and weather patterns affect the agricultural sector in a significant way. That’s one of the reasons that some researchers want to take agriculture indoors. Robert Colangelo, CEO of Green Sense Farms, grows produce — including micro-greens and basil — hydroponically.[8] Colangelo grows his crops inside “feeding them a constant stream of nutrient-rich water, in racks 25 feet high, beneath specialized LEDs, monitored by computer, and harvested as often as twice a week.” He observes, “We can grow a large volume, in a small footprint, 365 days a year. We’re not subject to rain or drought. We control the environment. So the weather is perfect every single day.” Although indoor agriculture will help in some circumstances, most crops will continue to be grown outside for the foreseeable future. Big data and precision farming are helping growers to get the most of each square foot of land and increase crop production in the most environmentally-friendly way possible. “These high-tech efforts are starting to bear fruit,” Pratt reports. “As is true in many other industries, technology is streamlining operations in agriculture, making food production more efficient and improving crop yields. Equally important, technology is enabling farmers to do their jobs in a more environmentally sound manner.” Ankur Mathur, a managing director in Accenture’s Digital practice, told Pratt, “There is a massive opportunity to really change how the world farms.” Scientists are also doing their part by developing crops that can thrive in new conditions. “Researchers at UC Davis and around the world,” reports Pat Bailey, “are scrambling to develop new varieties of food and fiber crops that will produce abundant yields despite drought and other effects of climate change. They’re also exploring more water-efficient ways to grow existing crops.”[9]

Ensuring food security in the decades ahead is going to take the combined efforts of all stakeholders — from researchers to farmers to consumers — but the challenge is not insurmountable. Just don’t be surprised if the “farm” is found floating on the ocean or inside a high-rise building.