Home » Big Data » The Internet of Everything and Global Transformation 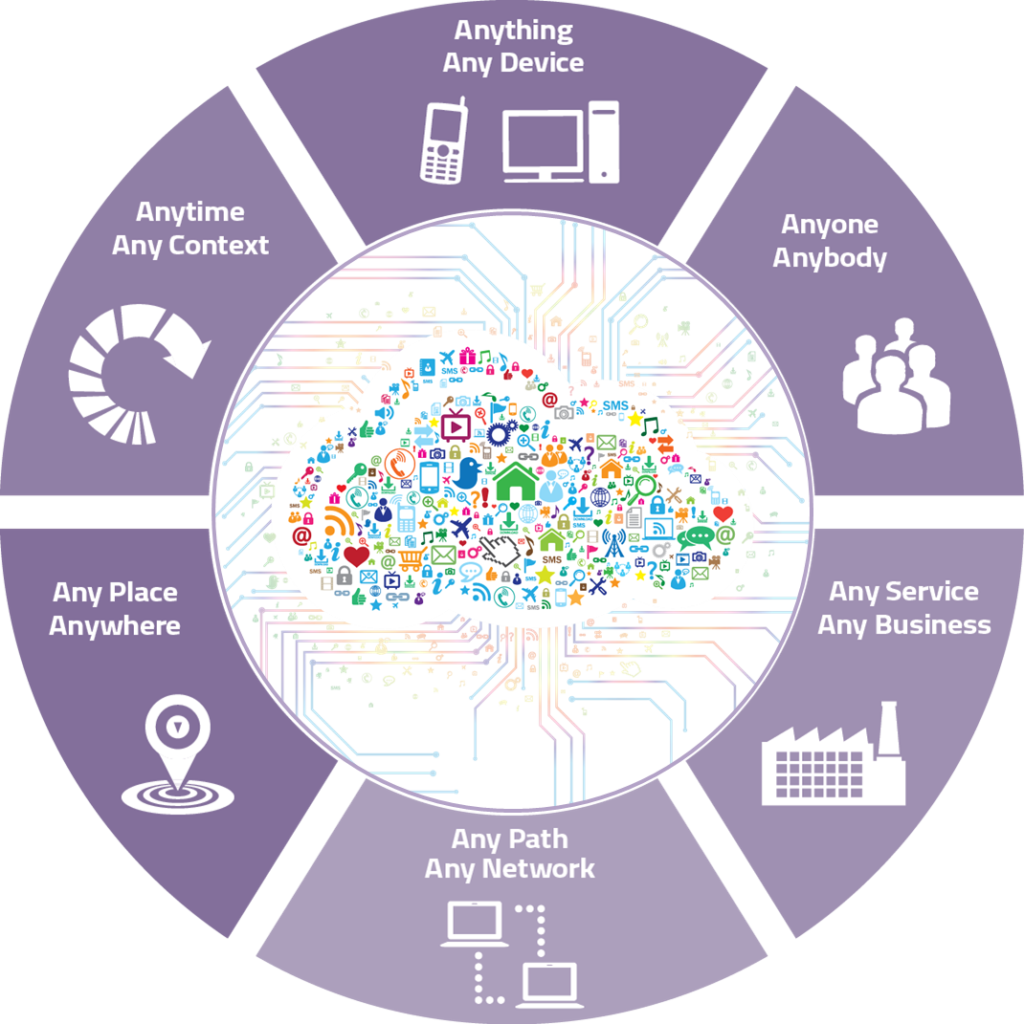 The Internet of Everything and Global Transformation

As I have noted in several previous articles discussing the Internet of Things (IoT), the IoT is set to transform the way the world connects. General Electric calls the IoT the “Industrial Internet” because it primarily connects machines; whereas, the World-Wide Web (WWW), commonly referred to as the Internet, primarily focuses on connectivity between people. As Cisco notes, however, the line between the IoT and the WWW is blurring rapidly and that line is likely to disappear in the years ahead. Cisco refers to this combined super-network as the Internet of Everything (IoE). Fifteen years ago, my friend, Dr. Thomas P.M. Barnett (@thomaspmbarnett), predicted the rise of the Internet of Everything with remarkable clarity. At the time, he called it the “Evernet.”[1] He wrote:

“The planet is undergoing a broad economic transformation that is loosely described as the rise of the New Economy. [See Kevin Kelly’s New Rules for the New Economy: 10 Radical Strategies for a Connected World] This jarring makeover of virtually every business model we hold dear is exemplified by the astonishingly global spread of the Internet and e-commerce. … The defining achievement of the New Economy in the globalization era will be the Evernet, a downstream expression of today’s Internet, which most of us still access almost exclusively through bulky desktop personal computers anywhere from a few minutes to several hours each day. Over the next ten or so years, this notion of being ‘online’ versus ‘offline’ will completely disappear, because of:

In other words, we go from today’s limited-access Internet to an Evernet with which we will remain in a state of constant connectivity. We will progress from a day-to-day reality in which we must choose to go online to one in which we must choose to go offline. This is not some distant fantasy world. Almost all the technology we need for the Evernet exists today. It mostly is just a matter of achieving connectivity. The rise of the Evernet will be humanity’s greatest achievement to date and will be universally recognized as our most valued planetary asset or collective good. Downtime, or loss of connectivity, becomes the standard, time-sensitive definition of a national security crisis, and protection of the Evernet becomes the preeminent security task of governments around the world. Ruling elites will rise and fall based on their security policies toward, and the political record on, the care and feeding of the Evernet, whose health will be treated by mass media as having the same broad human interest and import as the weather (inevitably eclipsing even that).”

Since each new technology builds upon previous technologies, pointing to a single technology as being the most important in this new Evernet world would be difficult. Nevertheless, smartphones and cloud computing are certainly first among equals. Smartphones and the cloud are interconnected. The cloud turns every smartphone into a supercomputer. The Economist puts it this way:[3]

“Today about half the adult population owns a smartphone; by 2020, 80% will. Smartphones have also penetrated every aspect of daily life. The average American is buried in one for over two hours every day. Asked which media they would miss most, British teenagers pick mobile devices over TV sets, PCs and games consoles. Nearly 80% of smartphone-owners check messages, news or other services within 15 minutes of getting up. About 10% admit to having used the gadget during sex. The bedroom is just the beginning. Smartphones are more than a convenient route online, rather as cars are more than engines on wheels and clocks are not merely a means to count the hours. Much as the car and the clock did in their time, so today the smartphone is poised to enrich lives, reshape entire industries and transform societies — and in ways that Snapchatting teenagers cannot begin to imagine.”

In an accompanying Economist article, the importance of the smartphone in the years ahead is discussed further:[4]

“Like the book, the clock and the internal combustion engine before it, the smartphone is changing the way people relate to each other and the world around them. By making the online world more relevant, and more applicable, to every task from getting from A to B to finding a date to watching over a child to checking the thermostat it is adding all sorts of convenience. Beyond convenience, though, a computer that is always with you removes many previous constraints on what can be done when and where, and undermines old certainties about what was what and who was who. Distinctions that were previously clear — the differences between a product and a service, between a car owner and a taxi driver, between a city square and a political movement — blur into each other. The world is becoming more fluid.”

In the years ahead, smartphones will be important for what users can contribute from them not just for what they can receive on them. Joshua New (@Josh_A_New), a policy analyst at the Center for Data Innovation, reports, “As sensor-laden devices proliferate the consumer marketplace, an increasing number of people are voluntarily contributing the data they generate to improve public spaces. Sometimes referred to as the ‘citizen sensor’, this recent trend is not just limited to activists and data enthusiasts — rather, it encompasses regular, everyday citizens empowered by a new generation of connected technologies that makes it easier than ever to contribute their data for the public good.”[5]  Companies are also developing new ways to connect smartphones using Wi-Fi technology. Google is the latest player in this effort to blend Wi-Fi and cellular technology.[6]

The bottom line is that the Internet of Everything is quickly transforming from vision to reality. As The Economist puts it, “The new computing’s tendency to the fluid will, in all likelihood, mean that the current form of the phone will not last forever. The truly personal computing phones make possible, though — the sort which adapts you to your surroundings and vice versa — seems sure to persist. People will live in perpetual contact both with each other and with the computational power of the cloud.” Sounds a lot like Dr. Barnett’s Evernet doesn’t it?