Home » Base of the Pyramid » Intelligence and Disease

Katie Baker wrote, “Global differences in intelligence is a sensitive topic, long fraught with controversy and still tinged by the disgraceful taint of pseudosciences such as craniometry that strove to prove the white ‘race’ as the most clever of them all. But recent data, perplexingly, has indeed shown cognitive ability to be higher in some countries than in others.” [“Why Do IQ Scores Vary By Nation?” Newsweek, 26 July 2010] She continues:

“What’s more, IQ scores have risen as nations develop—a phenomenon known as the ‘Flynn effect.’ Many causes have been proposed for both the intelligence gap and the Flynn effect, including education, income, and even nonagricultural labor. Now, a new study from researchers at the University of New Mexico offers another intriguing theory: intelligence may be linked to infectious-disease rates.”

The Flynn Effect deals with the issue of how general intelligence quotient (IQ) scores of a population change over time. It was named after New Zealand scientist James Flynn who observed in the 1980s that the scores of different groups of people on standard intelligence tests had consistently risen over the past decades. Although Baker associates this trend with “development,” that’s a generalization that may or may not be true. In order to test that thesis, one would have to develop appropriate IQ tests for so-called undeveloped indigenous peoples to see if their IQ scores remained static over time. The point of Baker’s article, however, is not necessarily to change the scientific world’s understanding of the Flynn Effect, but to report on the findings of researchers from the University of New Mexico. As I understand it, the Flynn Effect deals with unexplained temporal aspects of rising IQ scores, while the UNM report deals more with health-related aspects associated with the differences in global IQ scores. Reporting on the same study, the staff at The Economist wrote, “Human intelligence is puzzling. It is higher, on average, in some places than in others. And it seems to have been rising in recent decades. Why these two things should be true is controversial.” [“Mens sana in corpore sano,” 1 July 2010]. The fact that health can affect IQ should be neither controversial nor surprising. In a post entitled Iodine and Intelligence, I discussed studies that have demonstrated that even a moderate iodine deficiency, especially in pregnant women and infants, can lower intelligence by 10 to 15 IQ points — that’s significant. As both Baker and reporters at The Economist note, the brain is a sensitive and still mysterious organ. Baker, for example, wrote:

“The brain, say author Christopher Eppig and his colleagues, is the ‘most costly organ in the human body.’ Brainpower gobbles up close to 90 percent of a newborn’s energy. It stands to reason, then, that if something interferes with energy intake while the brain is growing, the impact could be serious and longlasting. And for vast swaths of the globe, the biggest threat to a child’s body—and hence brain—is parasitic infection. These illnesses threaten brain development in several ways. They can directly attack live tissue, which the body must then strain to replace. They can invade the digestive tract and block nutritional uptake. They can hijack the body’s cells for their own reproduction. And then there’s the energy diverted to the immune system to fight the infection. Out of all the parasites, the diarrheal ones may be the gravest threat—they can prevent the body from getting any nutrients at all.”

The importance of study should be obvious. As The Economist authors wrote, the study “suggests that the control of such diseases is crucial to a country’s development in a way that had not been appreciated before. Places that harbor a lot of parasites and pathogens not only suffer the debilitating effects of disease on their workforces, but also have their human capital eroded, child by child, from birth.” I’m sure that malnutrition and vitamin-deficient diets have a similar effect on IQ; but, the researchers from the University of New Mexico make a strong case that disease plays the most significant role in lowering average societal IQs. The Economist article continued:

“The inverse correlation that the group calculated between a country’s disease burden and the average intelligence of its people is impressive. They estimated the disease burden from World Health Organization data on DALYs (disability-adjusted life years) lost caused by 28 infectious diseases. These data exist for 192 countries. The intelligence scores came from work carried out earlier this decade by Richard Lynn, a British psychologist, and Tatu Vanhanen, a Finnish political scientist, who analyzed IQ studies from 113 countries, and from subsequent work by Jelte Wicherts, a Dutch psychologist. At the bottom of the average-intelligence list is Equatorial Guinea, followed by St Lucia. Cameroon, Mozambique and Gabon tie at third from bottom. These countries also have among the highest burden of infectious diseases. At the top of the list of countries with the highest average intelligence is Singapore, followed by South Korea. China and Japan tie in third place. These countries all have relatively low levels of disease. America, Britain and a number of European countries, follow behind the leaders.” 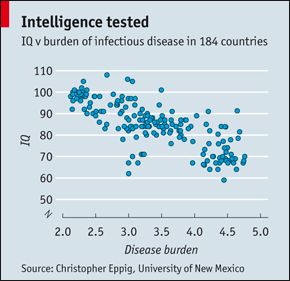 As noted above, Baker would have been more justified linking the findings of the New Mexico study with development than she was trying to link the Flynn Effect to development. Developed countries have lower levels of disease because they have better healthcare, cleaner water, better sanitation facilities, refrigeration, and gender equality in education. Both Baker and The Economist believe that the new study explains why the Flynn Effect occurs. Baker wrote:

“The study controlled for other potential causes of the IQ gap, such as the aforementioned education, agricultural labor, and income levels, as well as climate (colder lands tend to have higher IQ scores, and some theorists have proposed that lower temperatures may evolutionarily select for higher intelligence) and distance from humanity’s African cradle, which is the notion that unfamiliar lands might have forced migrating humans to become smarter. However, with the exception of this last theory—which has in any case been challenged—it turns out that ‘infectious disease remains the most powerful predictor of average national IQ.’ The study’s findings may also help explain the Flynn effect, which can’t be accounted for by evolution (the IQ gains occur over time spans too short for natural selection). So what’s going on instead? As nations develop, they improve their population’s access to safe drinking water and to vaccines and medicine—all of which lower parasitic infection rates.”

Along those same lines, The Economist notes that the study predicts “that as countries conquer disease, the intelligence of their citizens will rise.” It continues:

“A rise in intelligence over the decades has already been noticed in rich countries. It is called the Flynn effect after James Flynn, who discovered it. Its cause, however, has been mysterious—until now. If Mr Eppig is right, the near-abolition of serious infections in these countries, by vaccination, clean water and proper sewerage, may explain much if not all of the Flynn effect.”

Baker concludes, “If the study holds up, it could be revolutionary for our understanding of the still-bewildering variation in national intelligence scores—and also a pressing injunction to continue the fight against malaria and other developing-world diseases, which some global-health watchers have recently declared unbeatable.” With the evidence so strong, I have little doubt that the study will hold up. The Economist concludes:

“When Dr Lynn and Dr Vanhanen originally published their IQ data, they used them to advance the theory that national differences in intelligence were the main reason for different levels of economic development. This study turns that reasoning on its head. It is lack of development, and the many health problems this brings, which explains the difference in levels of intelligence. No doubt, in a vicious circle, those differences help keep poor countries poor. But the new theory offers a way to break the circle. If further work by researchers supports the ideas of Mr Eppig and his colleagues, they will have done the world a good turn by providing policymakers with yet another reason why the elimination of disease should be one of the main aims of development, rather than a desirable afterthought.”

The new study probably brings a bit of satisfaction to Bill and Melinda Gates as well. One of the primary goals of their foundation has been to help reduce healthcare challenges in the developing world. If they and others succeed, the world will be a better and smarter place in which to live.