Home » Big Data » Innovation and the Power of "What If" Thinking 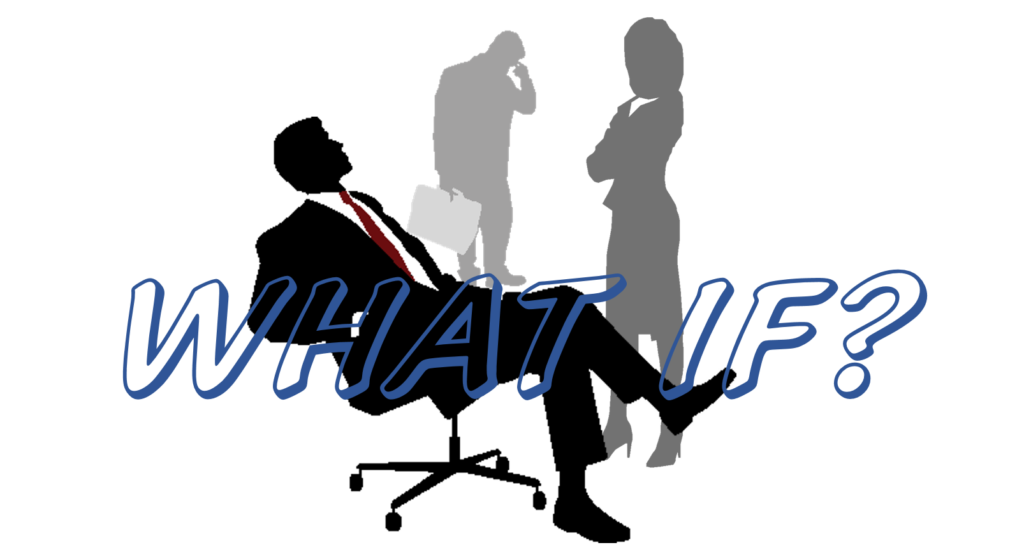 Innovation and the Power of "What If" Thinking

It has been nearly two decades since Clayton Christensen’s (@claychristensen) book, The Innovator’s Dilemma, was published. Yet Wall Street Journal columnist Christopher Mims (@mims) notes, “Whatever its explanatory power, the one thing ‘The Innovator’s Dilemma’ can’t explain is why, almost 20 years after the book was published, so many companies continue to fall prey to more nimble competitors.”[1] Many companies believe they can remain competitive through innovation; but, some analysts assert that innovation is not enough. What is missing in many cases is what Peter Schwartz (@peterschwartz2) calls The Art of the Long View and others simply refer to as “what if” thinking or scenario analysis. Count me among those who believe that if corporate innovation processes don’t include “what if” exercises they could find themselves left in history’s dustbin. Alan Gershenhorn (@AlanGershenhorn), Chief Commercial Officer at UPS, notes, “Competition is coming from all corners of the globe — and it’s not just traditional competitors who want to sneak up on you and eat your lunch. The next major threat to your business might not even exist yet.”[2] Boston Consulting Group (BCG) analysts Luc de Brabandere and Alan Iny assert, “The ‘what if?’ school of thinking clearly has a place in the business world.”[3]

De Brabandere and Iny note that the benefits of scenario analysis include “enhanced strategic creativity, greater preparedness, and superior risk awareness.” Analysts from River Logic agree that scenario planning is a powerful tool that needs to be used more. “In order to keep their company ahead of the competition and weather any economic storms,” they write, “executives must constantly ask themselves hypothetical questions. They might ask, ‘What should we do if the price of energy begins to skyrocket?’; ‘What should we do if legislation decides to pass a regulation that will make production more difficult?’; or ‘What if we run a promotional program?’”[4] De Brabandere and Iny note, “For a host of reasons, … classic scenario planning of the sort pioneered by the legendary Pierre Wack at Shell in the 1970s has fallen out of fashion. Some executives believe that it is too time consuming and resource intensive. Others feel that markets are too changeable for scenarios to be of much help.” However, River Logic analysts note, “For the first time in history, prescribing the best paths forward based on data-backed analytics — what we call prescriptive analytics — is within reach. A process known as scenario analysis allows organizations to determine outcomes from various inputs. For example, an organization can consider a range of economic, geopolitical, and technological issues, and create plans on how they might evolve into the future.”

As noted above, the greatest risk to a business is extinction. McKinsey & Company analysts Marc de Jong and Menno van Dijk observe, “Let’s face it: business models are less durable than they used to be. The basic rules of the game for creating and capturing economic value were once fixed in place for years, even decades, as companies tried to execute the same business models better than their competitors did. But now, business models are subject to rapid displacement, disruption, and, in extreme cases, outright destruction.”[5] Gershenhorn warns that company executives who focus on the “here and now” rather than the “now and later” are the ones most likely to put their company’s future in jeopardy. He adds, “To foster innovation, you need a laser focus on what could be. You can never be satisfied with the status quo. You always look for a new way to do something — better yet, find something that’s never been done before.” You often hear people talk about the need to think “out of the box.” But de Brabandere and Iny prefer something they call “new box thinking.” They explain, “A well-crafted scenario is, in essence, a new box — it can help a company look at its future from an entirely new perspective.” River Logic analysts believe emerging technologies are going to make scenario analysis more relevant than ever because they speed up the analytic process. They explain, “Scenario analysis is about using technology to quickly determine both small and large ‘what-if’ outcomes from a particular set of inputs. … One of the biggest benefits with scenario analysis is that it allows organizations to make quick decisions.” They continue:

“Each day executives are forced to make thousands of decisions. Most are insignificant, but there are several major decisions that could affect the overall success of a business. Executives need a way to calculate decisions quickly, even in the face of uncertainty. … Organizations who use scenario analysis have the ability to look into the future and analyze the consequences. They can monitor events and create contingency plans in response to the inevitable change. … Scenario analyses can challenge assumptions that underpin the current strategy by offering multiple scenarios.”

Cognitive computing systems are ideal platforms for conducting the type of analysis being described. Cognitive computing systems can handle myriad variables, discover new relationships, and provide actionable insights that can aid in decision making. Mims discusses another approach for taking the long view. This approach, developed by Anshu Sharma (@anshublog), a venture capitalist at Storm Ventures, recommends that companies look to develop the “stack” below the one in which they are currently operating rather than trying develop the stack above them. Although it sounds counter-intuitive, Mims explains:

“It helps to understand that in tech, the ‘stack’ is the layer cake of technology, one level of abstraction sitting atop the next, that ultimately delivers a product or service to the user. On the Internet, for example, there is a stack of technologies stretching from the server through the operating system running on it through a cloud abstraction layer and then the apps running atop that, until you reach the user. Even the electricity grid required to power the data center in which the server lives could be considered part of the technology ‘stack’ of, say, your favorite email service. … Companies move ‘down’ the stack all the time, and it often strengthens their position. It is the same thing as vertical integration. … Of course, the real test of a sweeping business hypothesis is whether or not it has predictive power. So here’s a prediction based on the stack fallacy: We’re more likely to see Uber succeed at making cars than to see General Motors succeed at creating a ride-sharing service like Uber. Both companies appear eager to invade each other’s territory. But, assuming that ride sharing becomes the dominant model for transportation, Uber has the advantage of knowing exactly what it needs in a vehicle for such a service.”

De Brabandere and Iny conclude, “The increase in uncertainty and the accelerating clock-speed of many markets, rather than rendering scenarios impractical, is perhaps the strongest argument for embracing them. This new approach to scenarios is not about precision but is instead about expanding the perception of the possible — and breaking an executive team out of a tunneled managerial perspective and into a creative, entrepreneurial, and strategic one. With turbulence on the rise, the value of low-cost ways to envision and seize emerging opportunities while planning for potential threats has never been higher. What a difference a day makes.”