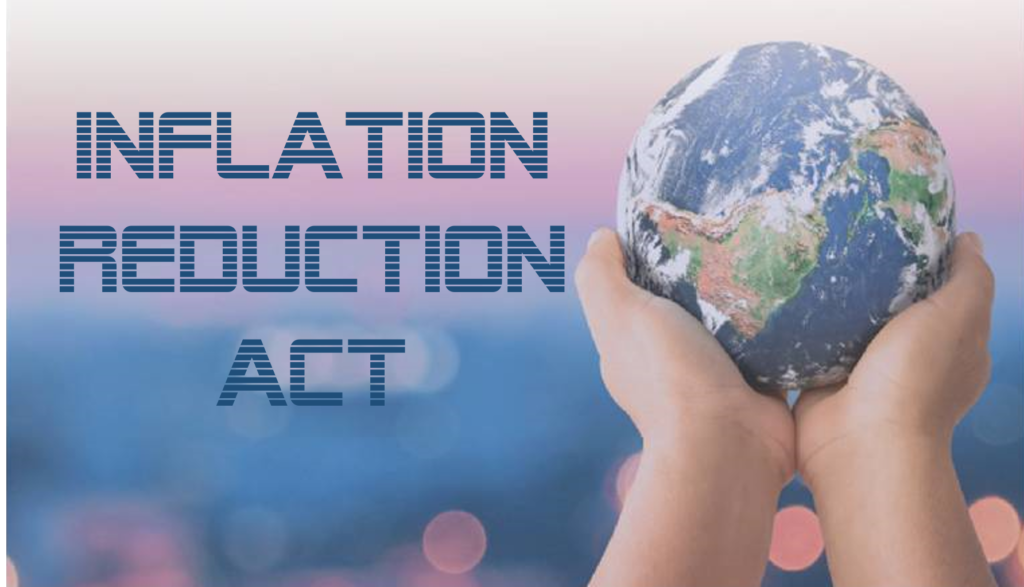 When the Digital Age was born in Silicon Valley, it sparked half-century of innovation — creating millions of products, services, and jobs that had not previously existed. Passage of the Inflation Reduction Act may spark another half-century of innovation in the field of climate change. Because the legislation is an omnibus bill containing a mix of proposals on a number of subjects, it is easily politicized. Look hard enough and there are bound to be things in the bill objectionable to everyone — usually an indication of a grand compromise needed in order to make a deal happen. However, as Bill Gates (@BillGates), founder of Microsoft, wrote just prior to the bill’s passage in the Senate, “The Inflation Reduction Act of 2022 may be the single most important piece of climate legislation in American history. It represents our best chance to build an energy future that is cleaner, cheaper and more secure.”[1] While I am by no means a climate change expert, it seems abundantly clear to me that companies capable of developing and executing effective climate policies and become leaders in the innovation of new climate technologies will be rewarded with outsized valuations. Markets have a way of recognizing and rewarding true innovators — often seeing them rise to unicorn status.

Climate change is not political, it’s just good for business and the planet

Whether you live in a so-called red state or blue state, you have felt the effects of climate change over the past few years. From wildfires and drought in the west to strengthened hurricane activity in the south to flooding in mid-America and the northeast, climate change has cast a pall over the economy. Business leaders have, for years, understood how climate change can negatively impact their companies and have often moved faster than governments to mitigate climate change’s consequences. Boston Consulting Group (BCG) analysts David Young and Simon Beck insist, “Rarely in business history have CEOs had more significant opportunities to capture advantages, reset industries, and anchor their legacies than at this moment in the global race to sustainability.”[2] They add, “These opportunities span industries and regions, and they extend beyond current net-zero ambitions and environmental, social, and governance (ESG) targets. CEOs should formulate strategies that create and capture long-term competitive advantage from the transition to net zero and sustainability.” I believe that corporate climate sustainability, along with the systemic adoption of artificial intelligence, will create a new governing and transformative rule set and drive decades of competitive advantage for the best-managed (and most highly valued) corporations.

Why the Inflation Reduction Act will spark innovation

Journalists Coral Davenport (@CoralMDavenport) and Lisa Friedman (@LFFriedman) remind us that the dangers of climate change were first brought to light during a Republican administration. They write, “In 1969, President Richard Nixon’s adviser Daniel Patrick Moynihan wrote a memo describing a startling future. The increase of carbon dioxide in the atmosphere caused by burning oil, gas and coal, Mr. Moynihan wrote, would dangerously heat the planet, melt the glaciers and cause the seas to rise. ‘Goodbye New York,’ Mr. Moynihan wrote. ‘Goodbye Washington, for that matter.’ Fifty-three years later, Congress is on the cusp of finally responding to what Mr. Moynihan termed ‘the carbon dioxide problem.'”[3] Responding to this “carbon dioxide problem” will require decades of innovation. As Gates notes, “Many of the technologies we’ll need to reach net-zero emissions don’t exist, are in early stages of development or are still too expensive to scale up.”

Friedman, along with her colleague Emily Cochrane (@ESCochrane), report, “The bill includes the largest expenditures ever made by the federal government to slow global warming and to reduce demand for the fossil fuels that are primarily responsible for causing climate change. It would invest nearly $400 billion over 10 years in tax credits aimed at steering consumers to electric vehicles and prodding electric utilities toward renewable energy sources like wind or solar power. Energy experts said the measure would help the United States to cut greenhouse gas emissions about 40 percent below 2005 levels by the end of this decade.”[4] That is a lot of money and businesses will try to elbow their way into the cash flow through innovation. As Gates observes, “Through new and expanded tax credits and a long-term approach, this bill [ensures] that critical climate solutions have sustained support to develop into new industries.” At the same time, people have to realize that the world didn’t become dependent on fossil fuels overnight and that it will take decades to sensibly wean the global economy off of fossil fuels. Innovation will play a critical role in how this is accomplished.

Mark Zandi (@economics_ma) and his team at Moody’s Analytics estimates, “The Inflation Reduction Act mitigates the economic cost of inaction. Compared with the scenario where no additional climate change action is taken by government, real GDP is approximately 0.1% higher a decade from now because of the Inflation Reduction Act, 0.6% higher by 2050, and 2.7% higher by 2100. The clear lesson is that upfront investments in addressing climate change reap substantial long-term economic benefits.”[5] The team at Princeton University’s ZERO Lab believes the Act will also drive “drive nearly $3.5 trillion in cumulative capital investment in new American energy supply infrastructure over the next decade (2023-2032).”[6]

They elaborate, “That includes more than $20 billion in annual investment in CO2 transport & storage and fossil power generation with carbon capture by 2030. Annual investment in hydrogen production (including electrolysis and methane reforming with carbon capture) increases to $3 billion annually by 2030, triple levels under current policy, and rises to over $50 billion by 2035. The Act has the greatest impact on investment in wind power and solar photovoltaic, which nearly doubles to $321 billion in 2030, versus $177 billion under current policy. The Act will drive substantial additional investments by households and businesses on the demand side of the energy system, including purchases of more efficient and electric vehicles, appliances, heating systems, and industrial process.”[6]

In addition, it has been estimated that nearly 1.5 million new jobs will be created by the Act in the manufacturing, construction, and service industries.[7] We know that bold measures can have unexpectedly large returns on investment, such as the Federal-Aid Highway Act of 1956 that created the interstate highway system. We also know that innovations in one area can have dramatic impacts in other areas. For example, America’s space program has spawned innovations such as artificial limbs, scratch-resistant lenses, firefighting equipment, solar cells, water filtration, better tires, wireless headsets, camera phones, CAT scans, memory foam, and portable computers. No one knows what unexpected and useful products will emerge once innovations addressing climate change begin to emerge.

Young and Beck assert, “This is a race — one that has already begun and is quickly accelerating. … And yet, most companies are still making their way to the starting line of the race to sustainability and have not addressed it in a strategic manner.” They aren’t surprised this is the case. They note, “When confronted with long-term endeavors, many CEOs struggle to balance the imperative of meeting quarterly expectations with the need to grapple with the many uncertainties of transforming their businesses. When it comes to sustainability, more than a few CEOs are attempting to walk this line by pointing to ambitious net-zero statements and ESG targets as evidence that their companies are front-runners in the race to sustainability. These are good moves, but they are quickly becoming de rigueur for well-managed companies, and they are insufficient to seize competitive advantage.”

Adopting a corporate strategy is never easy. Myriad factors must be taken into consideration and numerous assumptions must be made. Improving the chances of generating a winning strategy involves a lot of “what if” thinking. Peter Schwartz (@peterschwartz2) called such thinking The Art of the Long View. At Enterra Solutions®, we developed our Enterra Global Insights and Decision Superiority System™ to help clients become more resilient and competitive by dynamically modeling, simulating and determining the optimal scenario that is necessary to maximize a corporation’s strategy at the speed of the market with an extremely high degree of accuracy to mitigate risk or capitalize upon opportunity. The result of all these simulations is that a company can better understand, anticipate and navigate the future business environment. Young and Beck suggest, “Developing a strategic perspective involves answering four questions: What is the lay of the land? Where does the company need to go and how fast? What will it take to get there? How must the company be rewired to act now?” The Global Insights and Decision Superiority System is uniquely fit for this purpose.

In near-term, the money and incentives provided by the Inflation Reduction Act are going to stimulate a lot of innovation. As Gates notes, “These incentives [will] provide the private sector with the confidence to invest for the long term. This legislation [will] begin to transform the parts of our economy that are hardest to decarbonize, like manufacturing, which we must do to reach net-zero emissions.” This decarbonization transformation will require a lot thought about how companies are going to reduce their greenhouse gas emissions. The Global Insights and Decision Superiority System — powered by the Enterra Autonomous Decision Science™ platform — can be a powerful tool in any company’s kit when it comes to addressing climate change and stimulating innovation. I agree with Bill Gates’ conclusions, “The ability of America’s universities and industries to innovate remains second to none, yet the country risks falling behind as other countries race to build their own clean energy economies. This legislation would help turn American energy innovations into American energy industries and unlock huge economic opportunities in the energy market. If it becomes law, few nations would have the capacity for producing homegrown clean energy like the United States. America could quickly become a leader in the deployment of clean energy at the scale required.”