“After 244 years,” writes Julie Bosman, “the Encyclopaedia Britannica is going out of print.” [“After 244 Years, Encyclopaedia Britannica Stops the Presses,” New York Times, 14 March 2012] She reports, “In an acknowledgment of the realities of the digital age — and of competition from the Web site Wikipedia — Encyclopaedia Britannica will focus primarily on its online encyclopedias and educational curriculum for schools.” Tim Carmody argues, “Wikipedia Didn’t Kill Britannica. Windows Did.” [Wired, 14 March 2012] Carmody reminds us that Microsoft developed Encarta and offered to develop “a version of Britannica for PCs in the 1980s, with Windows 1.0. After Britannica turned Microsoft down, Microsoft partnered with Funk & Wagnall’s, rebranding it Encarta and focusing on a lean, computer-specific program that could help sell personal computers beyond productivity applications like Word and Excel.” Carmody insists, “Encarta is more important to this story than Wikipedia.” He explains his reasoning:

“Not because Encarta made Microsoft money (it didn’t), or because Britannica didn’t develop comparable products for CD-ROM and the web (they totally did, with the first CD-ROM encyclopedia in 1989 and Britannica Online in 1994). Instead, Encarta was an inexpensive, multimedia, not-at-all comprehensive encyclopedia that helped Microsoft sell Windows PCs to families. And once you had a PC in the living room or den where the encyclopedia used to be, it was all over for Mighty Britannica. When Wikipedia emerged five years later, Britannica was already a weakened giant. It wasn’t a free and open encyclopedia that defeated its print edition. It was the personal computer itself.”

Although I find Carmody’s arguments convincing, the popular perspective will remain that Wikipedia wrote the eulogy for the print edition of the Encyclopaedia Britannica. For example, the folks at Open-Site, write, “Facing the realities and the stiff competition from Wikipedia, the Encyclopedia Britannica will now focus primarily on their online services. But even then, it might be too late. Wikipedia has grown to be the number one source for students. In fact, many students will stop research and change topics if it’s not on Wikipedia.” Jen Rhee directed me to the following graphic which she helped put together about Wikipedia (Provided by: Open-Site.org.)

For bloggers like me, the fact that Wikipedia is working to improve the accuracy of its content is important. I often turn to Wikipedia for information to include in my posts. Although the death of the print version of the Encyclopaedia Britannica was inevitable, that doesn’t mean that it won’t be missed. The Wall Street Journal published the following graphic (click to enlarge) about the “online buzz” surrounding the announcement that Britannica was stopping the presses. 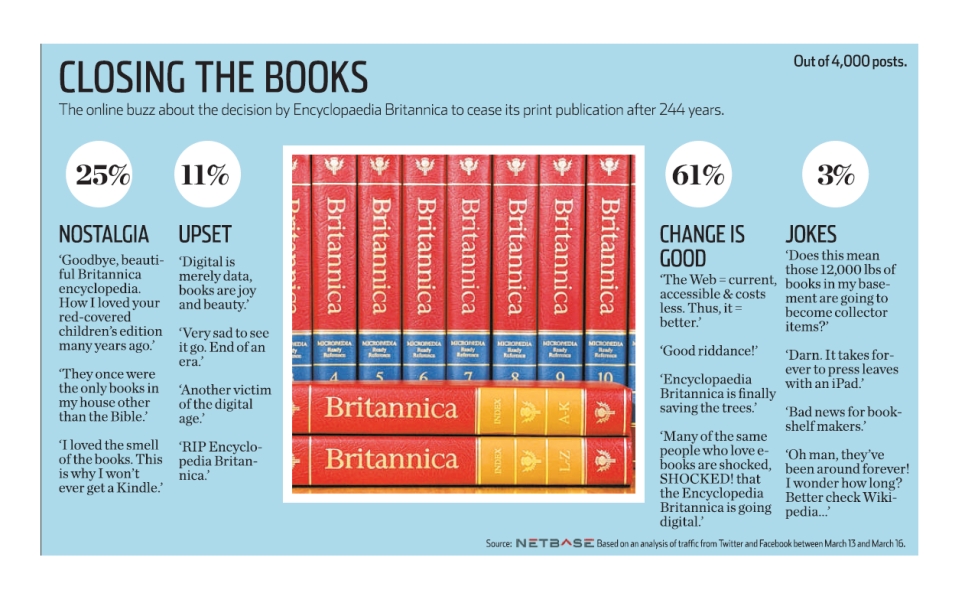 At the end of her article, Bosman writes:

“Many librarians say that while they have rapidly shifted money and resources to digital materials, print still has a place. Academic libraries tend to keep many sets of specialized encyclopedias on their shelves, like volumes on Judaica, folklore, music or philosophy, or encyclopedias that are written in foreign languages and unavailable online. At the Portland Public Library in Maine, there are still many encyclopedias that the library orders on a regular basis, sometimes every year, said Sonya Durney, a reference librarian. General-interest encyclopedias are often used by students whose teachers require them to occasionally cite print sources, just to practice using print. ‘They’re used by anyone who’s learning, anyone who’s new to the country, older patrons, people who aren’t comfortable online,’ Ms. Durney said. ‘There’s a whole demographic of people who are more comfortable with print.’ But many people are discovering that the books have outlived their usefulness.”

Carmody concludes, “The primary reason for Britannica to exist as a set of printed volumes was to serve as a household totem. The PC has long since taken that place, armed with Encarta, then Wikipedia and Google, and now the robust information economy of the entire web.” Carmody is undoubtedly correct, but you have to admit that a complete set of the Encyclopaedia Britannica still looks handsome filling up space on a bookshelf.