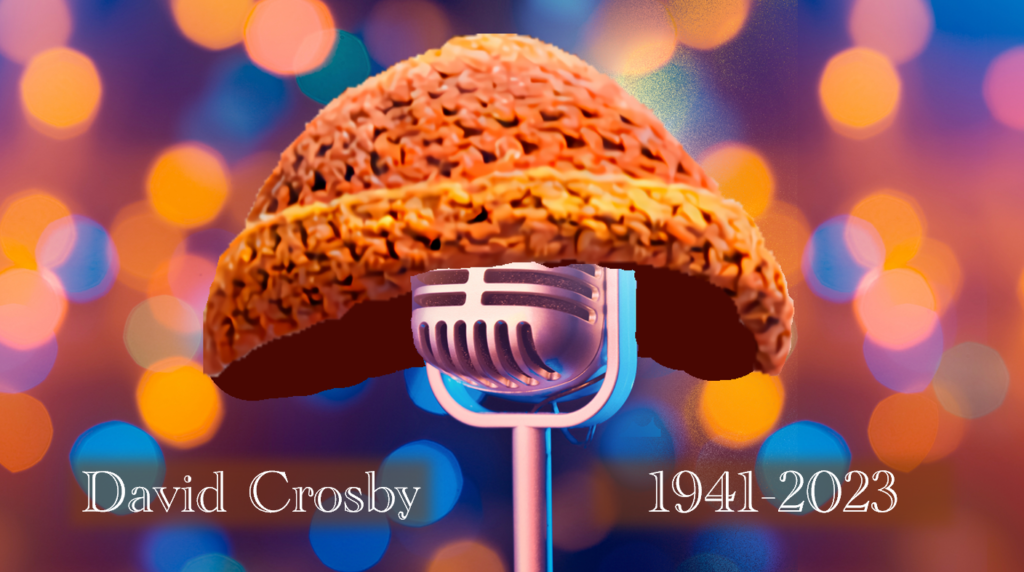 Most people are familiar with Don McClean’s ballad “American Pie,” whose lyrics include, “Long long time ago, I can still remember how that music used to make me smile. … But something touched me deep inside the day the music died.” January 2023 could be called the month the music died. Some of the musical luminaries who passed this month include Fred White (67), drummer for Earth, Wind & Fire; Lisa Marie Presley (54), a singer-songwriter and daughter of Elvis; Jeff Beck (78), a Rock-and-Roll Hall of Fame guitarist who began his career with the Yardbirds; Robbie Bachman (69), drummer for Bachman Turner Overdrive; Yukihiro Takahashi (70), a drummer and singer best known as a member of Yellow Magic Orchestra; Jeremiah Green (45), a founder of and drummer for Modest Mouse; Anita Pointer (74), lead singer of the Pointer Sisters; and David Crosby (81), an original member of the Byrds and a founder of Crosby, Stills & Nash.

David Crosby’s passing for me was bittersweet. I had met him a couple of times while staying at the Carlyle Hotel and had a brief conversation with him about 10 years ago. He seemed to be an interesting, soft-spoken person with a curious wit. Paraphrasing McClean’s lyrics, David’s music made me smile and something touched me deep inside the day that David Crosby died. Music critic Jim Farber notes, “David Crosby [was an] outspoken and often troubled singer, songwriter and guitarist who helped create two of the most influential and beloved American bands of the classic-rock era of the 1960s and ’70s, the Byrds and Crosby, Stills, Nash & Young.”[1] Mr. Crosby would have identified with that brief bio. In both private and public conversations, he admitted to his troubled past and irascible nature.

In spite of any personal failings, the BBC notes, “He was renowned for his guitar-playing and vocal harmonies. His career saw him achieve the rare feat of being inducted to the revered Rock and Roll Hall of Fame twice. Former bandmates saluted Crosby’s creative talents, while acknowledging the conflicts they had endured.”[2] And journalist Matt Schudel writes, “[David Crosby was] a singer-songwriter who helped define the sound of the Woodstock generation.”[3] Despite his sweet, tenor voice, Mr. Crosby lived a hard life. It probably surprised some people that he lived to become an octogenarian since he had a history of hepatitis (requiring a liver transplant), diabetes, heart ailments, and other problems. In fact, Rolling Stone magazine once named Mr. Crosby “rock’s unlikeliest survivor.”

Mr. Crosby’s musical legacy is not in doubt. Schudel notes, “Mr. Crosby sold millions of albums and performed songs that symbolized the era of peace, love and political engagement: ‘Mr. Tambourine Man,’ ‘Turn! Turn! Turn!’ and ‘Eight Miles High’ with the Byrds; and, with Stills, Nash and Young, ‘Carry On,’ ‘Marrakesh Express,’ ‘Teach Your Children’ and ‘Our House.’ … At a time when Jimi Hendrix, Janis Joplin, the Doors, and the Rolling Stones were taking rock in an amplified, acid-washed direction, Mr. Crosby and his bandmates turned to a gentler sound inspired by folk music, with acoustic guitars and intricate vocal harmonies. Every word could be clearly understood.”

In his final years, he maintained a sharp, unapologetic outlook on life; although, he did express some regrets. The BBC reports, “[Mr. Crosby] expressed regret over his addictions and altercations with co-stars, telling the Los Angeles Times in 2019 he was ‘ashamed’ of some of his past behaviors.” Upon learning of Mr. Crosby’s death, former bandmate Graham Nash, wrote, “What has always mattered to David and me more than anything was the pure joy of the music we created together, the sound we discovered with one another, and the deep friendship we shared over all these many long years. … David was fearless in life and in music.”[4] Below is a video of the concert at which Crosby, Stills, Nash, and Young performed together for the last time.

One of McClean’s closing “American Pie” stanzas reads, “We sang dirges in the dark the day the music died.” I don’t think Mr. Crosby would appreciate anyone singing a dirge at his passing. He celebrated life. Back in 2017, he told the San Luis Obispo Tribune, “Part of the job should just be to boogie, make you want to dance. Part of the job should be to take you on little emotional voyages that make you feel stuff.”[5] He certainly made us “feel stuff” and he will be missed. Rest in peace Mr. Crosby.