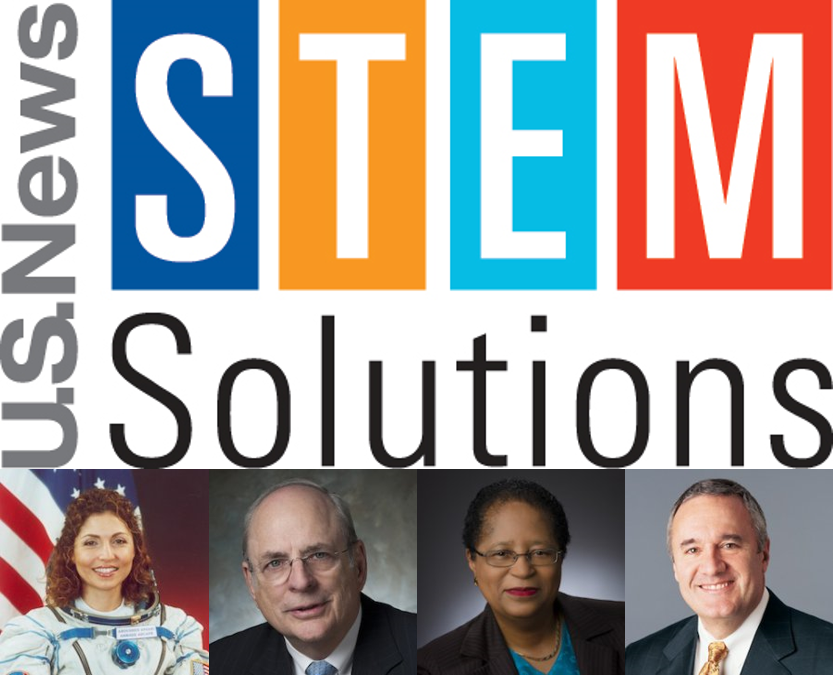 Honoring the Past and Looking to the Future of STEM Education

Throughout the year the entertainment field puts on award shows to honor individuals and groups in the fields of music and acting. These are preceded by red carpet interviews, hordes of paparazzi taking pictures, and a flurry of publicity to try and get people to watch the television broadcast. These gatherings provide some entertainment value but are mostly events during which entertainers get together to tell each other how great they are. To be fair, some of the honorees do use their wealth and fame to support worthy causes around the globe. Some of the more notable philanthropists that come to mind include Audrey Hepburn, Bono, Angelina Jolie, Brad Pitt, and will.i.am. To read more about how will.i.am (@iamwill) is supporting STEM education and trying to help kids escape poverty’s grasp, read my article entitled “Making STEM Education Cool.” Someday I expect will.i.am to be honored for his work by the folks at U.S. News & World Report, who each year select a new group of inductees for the U.S. News STEM Leadership Hall of Fame. The honorees don’t get a televised award show highlighting their good deeds and they aren’t be greeted by a red carpet or a street full of adoring fans. They do, however, get a moment in the spotlight at the annual U.S. News STEM Solutions Conference. This year’s conference will be held at the Manchester Grand Hyatt in San Diego, CA, from 29 June to 1 July. The 2014 honorees, who will be inducted at this year’s event, include: Anousheh Ansari, Norman R. Augustine, Shirley Ann Jackson, and William H. (Bill) Swanson. Below are biographical vignettes that describe why each of these deserving individuals are being honored.

Anousheh Ansari is a co-founder and chief executive officer of Prodea Systems. As she launched her company, on Sept. 18, 2006, she also blasted off for an eight-day expedition aboard the International Space Station and captured headlines around the world as the first female private space explorer. She also earned a place in history as the first astronaut of Iranian descent, the first Muslim woman, and the fourth private explorer to visit space. This was the accomplishment of a lifelong dream for her. As a successful serial entrepreneur and active proponent of world-changing technologies and social entrepreneurship, she along with her family provided the title sponsorship for the Ansari X Prize, a $10 million cash award for the first non-governmental organization to launch a reusable manned spacecraft into space twice within two weeks. This feat was accomplished in 2004 by legendary aerospace designer Burt Rutan. With the success of the X Prize competition, Ansari had helped launch a new era in private space exploration. Prior to her Space ventures, Anousheh served as co-founder, chief executive officer and chairwoman for Telecom Technologies, Inc. After earning three key U.S. patents and growing 100 percent year over year since inception, her company successfully merged with Sonus Networks, where she served as general manager and vice president of the Softswitch division.

Anousheh is a member of the X Prize Foundation’s Vision Circle, as well as on its Board of Trustees. She is a life member in the Association of Space Explorers and on the Advisory Board of the Teachers in Space project. She has received multiple honors, including the World Economic Forum Young Global Leader, Ellis Island Medal of Honor, Horatio Alger Award of Distinguished Americans, DFW International Community Alliance Hall of Fame award, the Working Woman’s National Entrepreneurial Excellence Award, George Mason University’s Entrepreneurial Excellence Award, George Washington University’s Distinguished Alumni Achievement Award and the Ernst & Young Entrepreneur of the Year Award for Southwest Region. While under her leadership, Telecom Technologies earned recognition as one of Inc. magazine’s 500 fastest-growing companies and Deloitte & Touche’s Fast 500 technology companies.

Anousheh serves on the boards of several not-for-profit organizations focused on STEM education and youth empowerment. She currently works to enable social entrepreneurs to bring about radical change globally, with organizations such as ASHOKA, which supports social entrepreneurship around the world, including the Middle East and Central Asia. She runs an annual competition called the “What If?” competition for middle school students to promote free thinking and STEM education.

Norman R. Augustine was raised in Colorado and attended Princeton University where he graduated with a BSE in Aeronautical Engineering, magna cum laude, and an MSE. He was elected to Phi Beta Kappa, Tau Beta Pi and Sigma Xi. In 1958 he joined the Douglas Aircraft Company in California where he worked as a research engineer, program manager and chief engineer. Beginning in 1965, he served in the Office of the Secretary of Defense as assistant director of Defense Research and Engineering. He joined LTV Missiles and Space Company in 1970, serving as vice president, Advanced Programs and Marketing. In 1973 he returned to the government as Assistant Secretary of the Army and in 1975 became Under Secretary of the Army, and later Acting Secretary of the Army.

Joining Martin Marietta Corporation in 1977 as vice president of technical operations, he was elected as CEO in 1987 and chairman in 1988, having previously been President and COO. He served as president of Lockheed Martin Corporation upon the formation of that company in 1995, and became CEO later that year. He retired as chairman and CEO of Lockheed Martin in 1997, at which time he became a Lecturer with the Rank of Professor on the faculty of Princeton University where he served until 1999.

He is a regent of the University System of Maryland (12 institutions), trustee emeritus of Johns Hopkins and a former member of the Board of Trustees of Princeton and MIT. He has been a member of the Advisory Boards of the Departments of Homeland Security, Energy, Defense, Commerce, Transportation, and Health and Human Services, as well as NASA, Congress and the White House.

He was a member of the Hart/Rudman Commission on National Security, and served for 16 years on the President’s Council of Advisors on Science and Technology under both Republican and Democratic presidents. He is a member of the American Philosophical Society, the National Academy of Sciences and the Council on Foreign Relations, and is a Fellow of the National Academy of Arts and Sciences and the Explorers Club.

Augustine has been presented the National Medal of Technology by the President of the United States and received the Joint Chiefs of Staff Distinguished Public Service Award. He has five times received the Department of Defense’s highest civilian decoration, the Distinguished Service Medal. He is co-author of “The Defense Revolution” and “Shakespeare In Charge” and author of “Augustine’s Laws” and “Augustine’s Travels.” He holds 30 honorary degrees and was selected by Who’s Who in America and the Library of Congress as one of “Fifty Great Americans” on the occasion of Who’s Who’s 50th anniversary. He has traveled in 111 countries and stood on both the North and South poles of the earth.

The Honorable Shirley Ann Jackson, Ph.D., is the 18th president of Rensselaer Polytechnic Institute of Troy, New York, and Hartford, Connecticut, the oldest technological research university in the United States. Described by Time magazine as “perhaps the ultimate role model for women in science,” Jackson, a theoretical physicist, has held senior leadership positions in government, industry, research and academe. Since 1999, Jackson has led an extraordinary transformation at Rensselaer Polytechnic Institute under an ambitious strategic effort known as “The Rensselaer Plan,” recently updated as “The Rensselaer Plan 2024.” With a focus on Rensselaer as a top-tier technological research university with global reach and global impact, her tenure has been marked by a successful $1.4 billion capital campaign, the hiring of more than 300 new faculty, a tripling of research awards and a tripling of applications to the freshman class, the construction of state-of-the-art research platforms, and innovations both in the curriculum and student life.

In 2009, President Barack Obama appointed Jackson to the President’s Council of Advisors on Science and Technology (PCAST), which assists the White House in policy formulation in the many areas of science, technology, and innovation that are crucial to strengthening the economy. She is co-chair of the President’s Innovation and Technology Advisory Committee (PITAC) within PCAST and serves on the White House Advanced Manufacturing Partnership Steering Committee 2.0. Jackson also serves on the U.S. Department of Energy’s Secretary of Energy Advisory Board.

In 2012, Jackson was elected as an international fellow of the British Royal Academy of Engineering. She is member of the U.S. National Academy of Engineering and the American Philosophical Society, and a fellow of the American Association for the Advancement of Science. She is a past president of the AAAS and former chairman of the AAAS board of directors.

She is also a fellow of the American Academy of Arts and Sciences and the American Physical Society, as well as a Regent of the Smithsonian Institution, a trustee of the Brookings Institution and a member of the board of the Council on Foreign Relations. She is a life member of the M.I.T. Corporation. Jackson is a director of several major corporations, including FedEx, IBM, Marathon Oil, Medtronic and PSEG. From 2006 to 2013, she was chairman of the board of NYSE Regulation.

Before taking on the leadership of Rensselaer Polytechnic Institute, Jackson was appointed chairman of the United States Nuclear Regulatory Commission by President Bill Clinton in 1995 and served for four years, reorganizing the agency and revamping its regulatory approach. While at the NRC, she also spearheaded the formation of the International Nuclear Regulators Association and served as the group’s first chairman.

Before leading the NRC, she was a theoretical physicist at AT&T Bell Laboratories and a professor of theoretical physics at Rutgers University, where she studied the electronic and optical properties of two-dimensional systems, and layered compounds.

Jackson holds an S.B. in physics and a Ph.D. in theoretical elementary particle physics from M.I.T., where she was the first African-American woman ever to earn a doctorate. She also has been awarded 52 honorary doctoral degrees.

William H. (Bill) Swanson is chairman of Raytheon Company. With 2013 sales of $24 billion and 63,000 employees worldwide, Raytheon is a technology and innovation leader specializing in defense, security and civil markets throughout the world. Swanson joined Raytheon in 1972 and has held a wide range of leadership positions, including Chairman since 2004 and CEO from 2003 to 2014.

U.S. News & World Report deserves credit for bringing attention to people who are trying to advance STEM education in America. It’s also gratifying to note that two of this year’s honorees are women. We need to get more women involved in STEM careers. I’d like to add my congratulations to the honorees and thank them for their service to our children and our children’s education.