Home » Education » Heard of the Maker Movement? You Will. 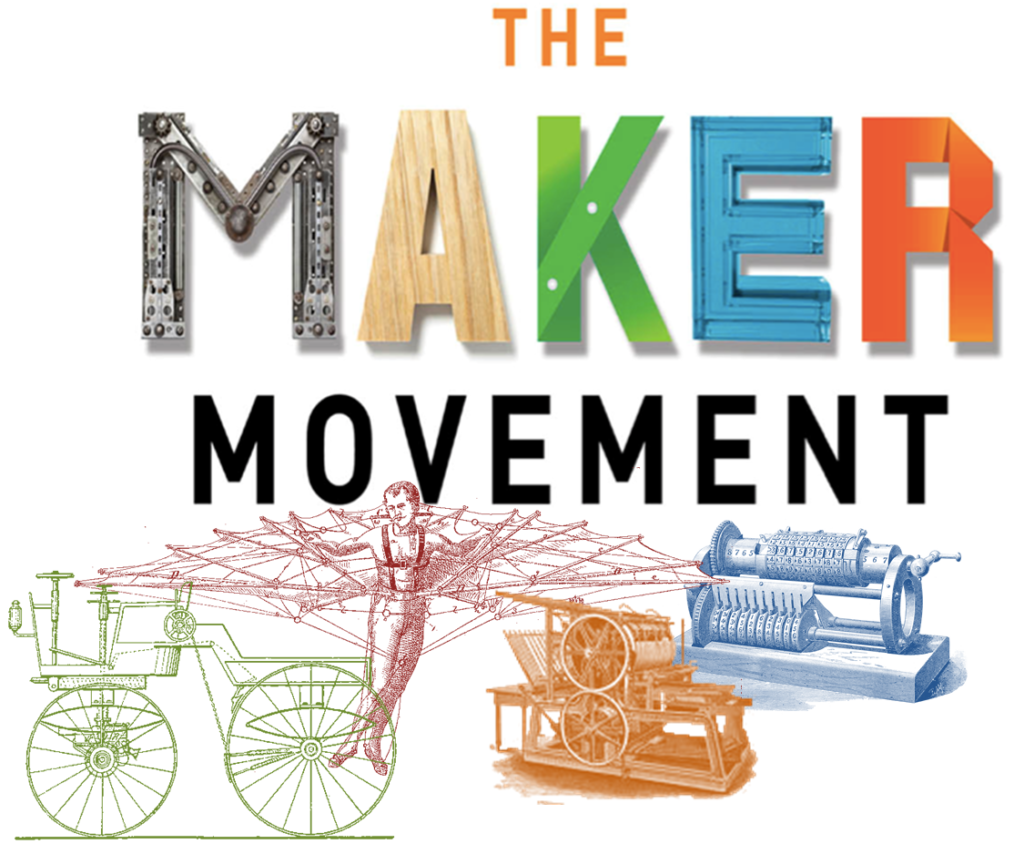 Heard of the Maker Movement? You Will.

“Ten years from now,” Louise Stewart predicts, “primary and secondary education may look more like a scene from Tim Allen’s workshop in The Santa Clause than Ben Stein’s economics class in Ferris Bueller’s Day Off. In some schools, like San Diego’s High Tech High, it already does.” [“Maker Movement Reinvents Education,” Newsweek, 8 September 2014] The driving force behind Stewart’s prediction is the Maker Movement. She explains:

“The Maker Movement is a global community of inventors, designers, engineers, artists, programmers, hackers, tinkerers, craftsmen and DIY’ers — the kind of people who share a quality that [San Diego’s High Tech High Principal, Larry] Rosenstock says ‘leads to learning [and]…to innovation,’ a perennial curiosity ‘about how they could do it better the next time.’ The design cycle is all about reiteration, trying something again and again until it works, and then, once it works, making it better. As manufacturing tools continue to become better, cheaper and more accessible, the Maker Movement is gaining momentum at an unprecedented rate. Over the past few years, so-called ‘makerspaces’ have cropped up in cities and small towns worldwide — often in affiliation with libraries, museums and other community centers, as well as in public and independent schools — giving more people of all ages access to mentorship, programs and tools like 3-D printers and scanners, laser cutters, microcontrollers and design software.”

The Maker Movement is in line with my belief that some subjects are best learned when they are applied to real-world problems. I love the hands-on, project-based approach to education. That’s why I, along with a few colleagues, founded The Project for STEM Competitiveness to help get a project-based, problem-solving approach into schools near where we live. One of the oft-heard complaints about the current stress on science, technology, engineering, and mathematics (STEM) is that it undervalues the arts and humanities. The Maker Movement is all inclusive. Stewart provides an excellent example of what I mean.

Quentin Crawford fits some gears together during a 3D printing project at High Tech High. Students were tasked with designing their initial prototype for a rotating mechanism. SCOTT SWAALEY[/caption]

“Consider a recent ninth-grade assignment on the rise and fall of populations. Humanities teacher Mike Strong and physics and engineering teacher Scott Swaaley told their group of 50 freshmen to build a 6-foot-diameter geared wheel out of wood and come up with a theory about why and how civilizations rise and fall based on their readings and research on the Mayans, Romans and Greeks. After presenting and defending each of their theories, they worked in teams of five to figure out a way to physically manifest those abstract concepts in the form of a mechanism to be affixed to and powered by the turning of the class’s giant wheel. The result was mesmerizing — a wooden piece of art composed of dozens of gears of varying shapes and sizes, turning in different directions around laser-printed text and illustrations, and a rotating wheel etched with student drawings.”

Tim Bajarin (@bajarin), President of Creative Strategies Inc., agrees with Stewart that the Maker Movement could have a significant impact on education in America. “I am very excited about the Maker Movement,” he writes. “The more I look into it, the more I believe that it’s very important to America’s future. It has the potential to turn more and more people into makers instead of just consumers, and I know from history that when you give makers the right tools and inspiration, they have the potential to change the world.” [“Why the Maker Movement Is Important to America’s Future,” Time, 19 May 2014] It should be pretty obvious that there is a strong connection between STEM education and the Maker Movement. Phil Dunmore, ‎head of consulting UK at Cognizant, notes, “Over the last few years there has been a lot of interest in Maker Faires in the US and the Maker Movement. Many have heralded the Maker Movement as bringing about the third industrial revolution by creating a community of entrepreneurs who, in general, are highly skilled in Science, Technology, Engineering and Maths (STEM). These communities act like multi-generational incubators of creativity and innovation. The direct result of this is that the next generation of budding Makers are focusing on boosting their STEM skills in order to be involved, and succeed in, this movement.” [“How Maker Faires are boosting STEM skills,” ITWorks, 26 February 2015] The point of the Maker Movement is that making things is fun and interesting and, in order to succeed, you need good STEM skills.

One of the individuals credited with spearheading the Maker Movement is Dale Dougherty (@dalepd), founder of MAKE Magazine and creator of Maker Faire. According to its website, Maker Faire is “part science fair, part county fair, and part something entirely new. Maker Faire is an all-ages gathering of tech enthusiasts, crafters, educators, tinkerers, hobbyists, engineers, science clubs, authors, artists, students, and commercial exhibitors. All of these ‘makers’ come to Maker Faire to show what they have made and to share what they have learned.” I’m a big fan of cross-discipline activities as well as the learn-by-doing approach to education. It was this kind of idea cross-pollination that lifted the pall of the dark ages. Maker Faire’s also look like fun as the following video demonstrates.

Dunmore believes that the Maker Movement embraces all that should be encouraged in education. He explains:

“Creativity and innovation coupled with STEM are essential to producing the products and services we will need in the future. For this reason we need to focus on both STEM and the arts – sometimes referred to as ‘STEAM.’ And moving beyond competitiveness, we believe that education, and particularly STEM education, is the fundamental sustainability issue of our time, since the solutions to poverty, global health issues and climate change will require a highly educated and STEM-literate population.”

Bajarin, however, points out that the Maker Movement seems to be suffering from the same challenge that faces the broader technology community, namely, there are not enough minorities involved. “As I walked the floors of the Maker Faire during the first day of the event,” he writes, “I did not see one African American family in the crowds while I was there, and I only saw two Hispanic families with kids checking things out. I actually dedicated an hour to walking all over the grounds looking for people of minority descent during the time I was at the show. I would say the majority of the families there where white, although I also saw a lot of Asian and Indian families with their kids roaming the faire.” Minorities need to be exposed to events like Maker Faires and project-based educational activities in schools. They need to feel the excitement and fun of making something or solving a real-world problem. We cannot succeed as a country if a significant portion of our population is not involved in helping solve the challenges we face. David Wells, manager of creative making and learning at the New York Hall of Science, told Stewart that “this kind of education does result in the gain of measurable, practical skills.” But, he added, “It’s really about the problem-solving skills as opposed to the specific [technical] skills. It’s about teaching kids how to break down their big ideas into smaller components in order to figure out a plausible first step. It’s about helping students become familiar not just with makerspace tools but, more important, with the process of finding, accessing and using information to teach themselves how to do whatever it is they want to do, and make whatever they want to make.”

Education should be about helping our children cope better with life’s challenges. The Maker Movement is certainly one way to expose them to the skills they will need.