Home » Agriculture » Have You Heard the One About the Chickens?

Have You Heard the One About the Chickens? 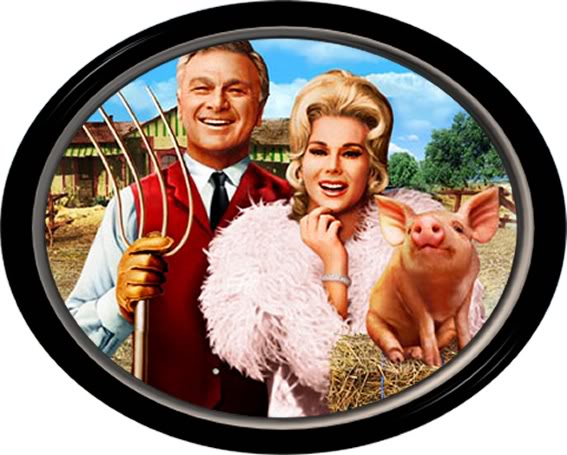 A recent article in the Los Angeles Times discussed efforts to convince veterans to consider vocations in farming and other food-related businesses [“From swords to plowshares: Introducing military veterans to farming,” by Mary MacVean, 8 July 2010]. The article begins the story of a veteran who slipped into a career in agriculture because the home he bought came with 200 avocado trees which he started taking care of “just because they were there.” He was interviewed at a Santa Monica, CA, job fair held earlier this month that was the subject of MacVean’s article. Organizers hoped that it would inspire some veterans to get into agriculture and “help preserve small family farms.” I’m afraid that first image that came to my mind when I read the story was that of Oliver Wendell Douglas and his wife Lisa (the bumbling main characters on the TV sitcom Green Acres). The Douglas’ set about running a farm with little or no experience and the sitcom produced most of its laughs from the predicaments into which their ignorance and inexperience got them. It also reminded me of an old joke about another city dweller who wanted to enjoy the farming life. It goes like this:

A life-long city man, tired of the rat race, decided he was going to give up the city life, move to the country, and become a chicken farmer. He found a nice, used chicken farm and bought it. As luck would have it, his next door neighbor was also a chicken farmer. The neighbor, after upon seeing the moving van in neighboring yard, came over for a welcoming visit and offered his help saying, “Chicken farming isn’t easy. Tell you what. To help you get started, I’ll give you 100 chickens.” The new chicken farmer was both thrilled and grateful. Two weeks later the new neighbor stopped by to see how things were going. The new farmer said, “Not too good. All 100 chickens died.” The neighbor, both embarrassed and dismayed, said, “Oh, I can’t believe that. I’ve never had any trouble with my chickens. I’ll give you 100 more.” Another two weeks went by, and the neighbor stops in again. The new farmer says, “You’re not going to believe this, but the second 100 chickens died too.” Astounded, the neighbor exclaimed, “I can’t imagine what went wrong. What did you do to them?” “Well,” says the new farmer, “I’m sure it’s my fault. I’m not sure whether I’m planting them too deep or not far apart enough.”

“Hobbies often hatch small-business ideas. Chickens are no exception. Ruth Haldeman began adopting pet chickens in 2002. ‘I wanted fresh eggs, but I found that chickens are like peanuts, you can’t have just one,’ she says. Before long, Ms. Haldeman had founded ChickenDiapers.com in Hot Springs, Ark. ‘Everyone was talking about how there was a need for diapers,’ she says, given that chickens typically can’t be potty trained. ‘Oh, lord, what a mess they make.'”

Right about now you are asking yourself, “Why do chickens need diapers?” Good question. The answer is that many owners of “pet” chickens keep them indoors! Needleman continues:

“Ms. Haldeman, who is also a full-time chemist, designed a chicken diaper with a replaceable liner. She says it takes her about an hour to stitch one together, and her diapers are available in a variety of colors and patterns, such as rainbow and camouflage. She usually charges between $9 to $14 depending on a bird’s size. Buyers hail from cities such as New York and Tacoma, Wash., and as far away as New Zealand. ‘People like to have their chicks inside the house roaming free,’ says Ms. Haldeman, who declined to share how many diapers she sells a week because she’s seeing more competition lately. More urban and suburban dwellers are keeping chickens, a trend that stems from both the recession and the local-food movement. Entrepreneurs, meanwhile—many chicken keepers themselves—have begun flocking to the aid of pet-chicken enthusiasts, dispensing starter kits, accessories and advice to go with the birds.”

Who would have thought that in the midst of one of the worst economic crises in the past hundred years someone could make a living selling pet chickens and accessories to go along with them? Apparently, a lot of people. Needleman explains:

“Derek Sasaki and Traci Torres of Norwalk, Conn., launched My Pet Chicken LLC in 2005 while juggling full-time jobs they’ve since quit. They now sell roughly 2,500 baby chicks a week through a partnership with a hatchery in Ohio. The company, whose catalog includes layers of chocolate, white, brown and green eggs, says it sells birds weeks in advance. ‘We are literally counting our chickens before they hatch,’ Mr. Sasaki says. Beyond birds, the company also sells accessories such as $25 chicken diapers and $8 saddles, which are protective aprons for the hen, to keep her feathers from getting pulled out by a frisky rooster. They sell coops, heat lamps and decor for chicken lovers, such as a $10 black hen tape dispenser. The couple, who invested around $10,000 in savings to launch the small enterprise, expect revenues to top $1 million this year.”

So who are these people buying pet chickens and keeping them inside their homes? Needleman introduces us to one such couple:

“Kevin Tschida … and his wife, Paula, live with [four chickens] in their rented single-floor home in Bakersfield, Calif. ‘[The diapers] have made a huge difference,’ he says. ‘There is less smell in the house, less bending over.’ Mr. Tschida says the birds, plus two ducks who wear diapers …, spend most of their time frolicking and sleeping indoors. ‘It is like the diaper removes them from the farmyard and gives them the status of pets,’ says Mr. Tschida, who also owns a dog, two cats, two parrots, a rabbit and some fish. There are no firm statistics on the number of pet-chicken owners in the U.S. BackYardChickens.com’s growing membership is one indicator it’s more than a flash in the pan. The information and networking site says it has more than 60,000 members today, up from 35,000 a year ago and 12,000 in June 2008.”

That’s a lot of chicken lovers. The founder of BackYardChickens.com, Rob Ludlow, “attributes the rising ranks of chicken enthusiasts in part to the birds’ ability to produce fresh eggs and fertilizer, as well as act as natural pesticides by eating bugs and worms.” Sounds to me like Ludlow is talking about your basic outdoor chicken. At least in my home, we don’t have a significant “bug and worm” problem indoors. Needleman concludes:

“First-time chicken owners tend to have lots of questions. … Among the most common: ‘Do you need a rooster to get eggs?’ says Judy Morris, owner of Coop D’État LLC, a pet-chicken consulting and retail company that she runs out of two farmers’ markets in her hometown of Weston, 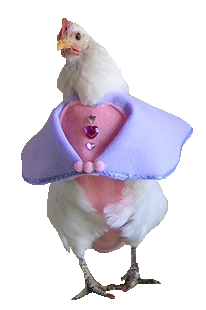 Conn. (The answer is no.) Ms. Morris, who is also a part-time producer for Martha Stewart Living Omnimedia Inc., sells package deals of four baby chicks, coops she assembles by hand with the help of her three sons, and a starter kit for $1,200. Since launching her business in May, she’s sold four sets. Andy G. Schneider of Alpharetta, Ga., who calls himself the Chicken Whisperer, hosts a daily hour-long Internet radio show on raising backyard chickens that attracts around 15,000 listeners nationwide a month, according to BlogTalkRadio. He sells Chicken Whisperer gear off his website, including T-shirts, watches, mugs, mouse pads and bumper stickers. … Some chicken fans see more opportunities. Linda Celez, a nonprofit worker in Michigan, has made holiday-themed costumes for her pet hen Suzie and pet rooster Phillip. For July 4th, she put them in patriotic garb and for Halloween, has dressed them as Prince Charming and Cinderella. She’s given away some of her poultry apparel to friends who have pet chickens, and is now thinking about it as a money-making prospect. ‘It’s an area of business that’s untouched,’ says Ms. Celez.”

Now that I’ve exposed you to the wonderful world of pet chickens, those of you who are inclined to become entrepreneurs should hear opportunity knocking (or at least scratching) at your door. Imagine training chickens as guards (who wouldn’t flee from an enraged chicken?). With a small leash and proper training, chickens could be guide chickens. If they could be trained to find (but not eat) worms, you could use them to open a bait shop. The possibilities are endless. If you want to be your own boss, now is the time to start — don’t be chicken!