“Back in 1973,” the staff at Marketing informs us, “the captains of industry and commerce selected the single standard for product identification that the world now knows as the GS1 Barcode. The decision created a global language of business that allows visibility in the entire supply chain across all industry sectors.” [“Turning 40, the humble barcode clocks up 6bn scans per day,” 3 July 2013] The article continues:

“For 40 years, the GS1 barcode has revolutionised the way we do business and still remains the most widely used identification system and supply-chain standard in the world. A year after the barcode was selected, a pack of Wrigley’s gum became the first product to be scanned with a GS1 Barcode, on 26 June 1974, at 8:01am to be precise. Today, more than five billion products are scanned globally each day.”

In the fast-paced technology world, 40 years is long lifespan. Other inventions introduced in 1973 that have enjoyed long lives include the ethernet, gene splicing, and the disposable lighter. That same year, a patent application for the “radio telephone system” (which we now call mobile phones) was filed. Yet, the lowly barcode barely gets a mention on most lists of important inventions. One rare exception to that trend is Lilith eZine, which ranks the barcode at number 6 on its list of “101 Inventions That Changed the World.” That article notes:

“Barcodes were conceived as a kind of visual Morse code by a Philadelphia student in 1952, but retailers were slow to take up the technology, which could be unreliable. That changed in the early 1970s when the same student, Norman Woodland, then employed by IBM, devised the Universal Product Code. Since then, black stripes have appeared on almost everything we buy, a ubiquity fueled by their price – it costs about a tenth of a penny to slap on a barcode.”

Mary Bellis reminds us that Woodland wasn’t alone in conceiving the notion of pattern recognition technology. She writes:

“In 1948, Bernard Silver was a graduate student at Drexel Institute of Technology in Philadelphia. A local food chain store owner had made an inquiry to the Drexel Institute asking about research into a method of automatically reading product information during checkout. Bernard Silver joined together with fellow graduate student Norman Joseph Woodland to work on a solution. Woodland’s first idea was to use ultraviolet light sensitive ink. The team built a working prototype but decided that the system was too unstable and expensive. They went back to the drawing board. On October 20, 1949, Woodland and Silver filed their patent application for the ‘Classifying Apparatus and Method’, describing their invention as ‘article classification … through the medium of identifying patterns’.” [“Bar Codes,” About.com]

Woodland’s and Silver’s design wasn’t the familiar barcode you see today. Their initial patent application featured a bull’s-eye design (as shown in the attached image from their patent application). Valerie J. Nelson reminds us that much of the credit for selecting today’s familiar barcode design belongs to Alan L. Haberman. [“He led bid to pick design for bar code,” Los Angeles Times, 22 June 2011] She explains:

“Haberman chaired the industry committee that settled on the bar-code symbol in 1973. … When Haberman was asked to help modernize grocery-store technology in 1971, he was the chief executive of First National Stores, a New England supermarket chain. The dozen members of his committee were ‘young, intense, brilliant,’ [Stephen A. Brown wrote in the 1997 book ‘Revolution at the Checkout Counter.’] … The group spent more than two years deciding on the format for the bar code, invented in 1949 by two engineers, Norman Joseph Woodland and Bernard Silver, who favored a bull’s-eye design. The bull’s-eye ended up losing to one by IBM — the now-familiar vertical black lines anchored by a series of numbers. The widely used version of the bar code is known as the universal product code. … ‘The proof that this is successful,’ Haberman told the Associated Press in 1999, ‘is that everybody takes it for granted’.”

John LaVacca, vice president at IBM Global Business Services, told the Marketing staff, “40 years after the invention of barcodes they continue to make a positive contribution to supply-chain efficiency, global trade, and consumers’ lives.” The staff reports, “From traceability to automatic restocking of store shelves to faster and more efficient export and import, the barcode has made a hyper-efficient supply chain possible through a global system of standards.” Other benefits identified by staff include, “the eradication of data-entry errors and waiting time at point of sale. It is also beneficial to business owners as it increases sales, delivers better customer service and better tracking of stocks and store flows.”

Because of its ubiquity and low-cost, some people believe the barcode will live to see 80 and beyond. For example, Ian Dunn, senior business manager at Woolworths, told the Marketing staff, “The last 40 years of GS1 Barcodes in the retail, food and grocery sectors has been the foundation of efficiency and accuracy in the supply chain from manufacturing and distribution through to the seamless delivery of product to consumers on supermarket shelves. The next 40 years will be a great opportunity for other sectors to get involved to realise the many benefits and potential of GS1 standards. Having one global standard that is accepted and adopted by every player will undoubtedly protect the global supply-chain market.” 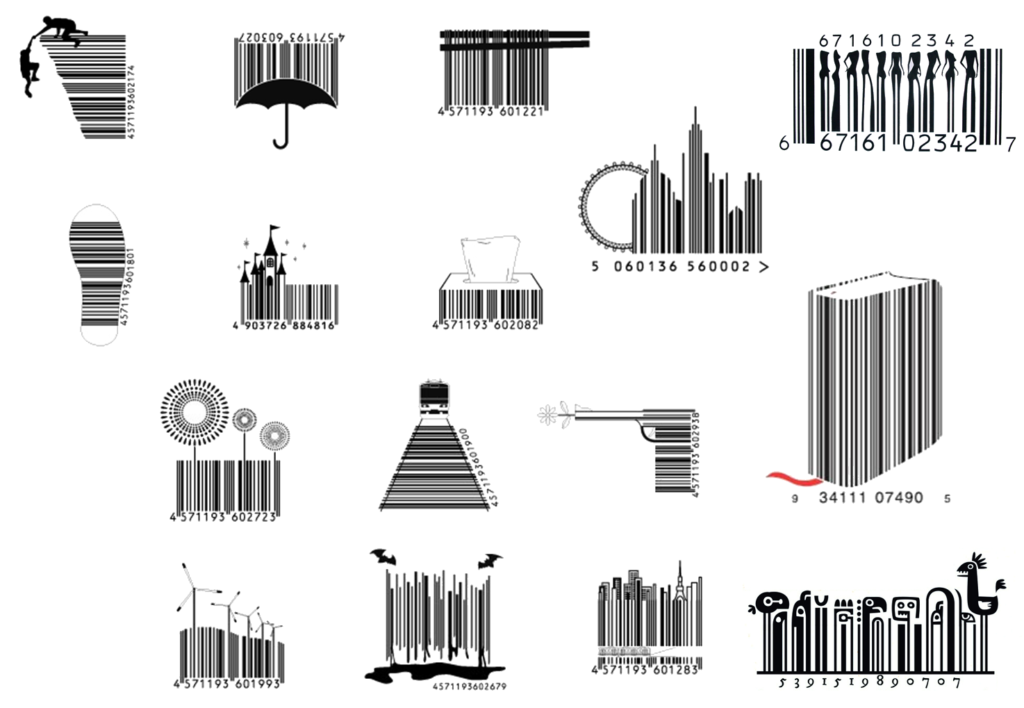 Although the barcode is getting on in years, it has undergone some changes over its lifetime. For example, Sarah Nassauer, reports, “Package design has become so artful, it has come to this: Even the barcode, the style runt of product labeling, is getting gussied up.” [“Art in Aisle 5: Barcodes Enter Expressionist Period,” Wall Street Journal, 22 June 2011] Nassauer continues:

“Beer, granola, juice and olives are sporting barcodes that integrate famous buildings, blades of wheat and bubbles into the ubiquitous black and white rectangle of lines and numbers. Consumer-goods companies hope these vanity barcodes will better connect with customers. The trend is popular with smaller companies, and even one of the world’s largest food companies, Nestle SA, is trying out vanity barcodes on its smaller brands. … A handful of companies that specialize in making vanity barcodes have cropped up in recent years, though some companies create them in-house. Some vanity-barcode designs aim to be elegant, others quirky.”

Nassauer reports that some vanity-barcodes aren’t functional and aren’t meant to be. They have simply become part of the packaging. In fact, the barcode as art has taken many forms, including expensive fine art. But its principal value is making supply chains more effective. Tim Piper, Victorian director of the Australian Industry Group, told the Marketing staff, “With the focus now on the barcode technologies of the future, we need to harness business activities in parallel with barcode technology and make alignments to improve productivity and increase effectiveness to assist with business profitability.”

In the age of big data, gathering and analyzing as much data as possible is going to be important. Although barcodes contain a lot of information, there are limits. It may be those limitations that eventually make the barcode fall out of favor. But, for the moment, the barcode still reigns supreme. Happy 40th birthday.