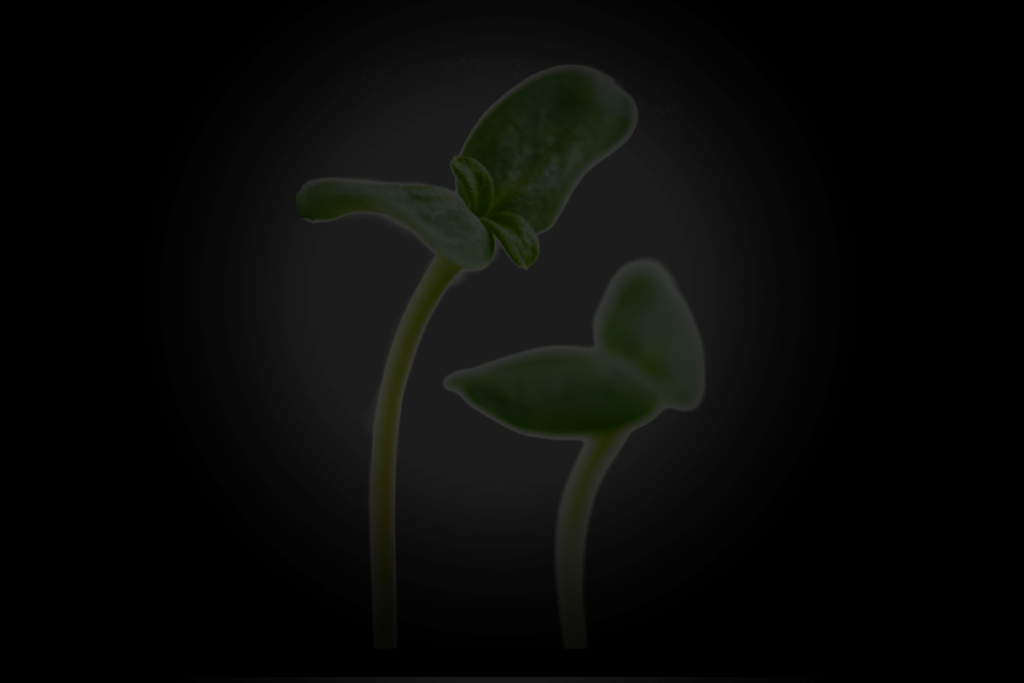 Growing Food in the Dark

The term “in the dark,” when applied to a person, generally means someone living in a state of ignorance or who is uninformed. However, a team of scientists from UC Riverside and the University of Delaware could help humanity gain a new appreciation for the term “in the dark” through their development of a way to grow food in total darkness — and they’re not just talking about mushrooms! Most plant life, explains science writer Holly Ober (@uclaholly), requires sunlight for the process of photosynthesis. She writes, “Photosynthesis has evolved in plants for millions of years to turn water, carbon dioxide, and the energy from sunlight into plant biomass and the foods we eat. This process, however, is very inefficient, with only about 1% of the energy found in sunlight ending up in the plant.”[1] Since light has always been an important requirement for plant growth, the UC Riverside and the University of Delaware team’s efforts is a real breakthrough. The team has found “a way to bypass the need for biological photosynthesis altogether and create food independent of sunlight by using artificial photosynthesis.”

Before discussing how this breakthrough might make a difference in the agricultural sector, let’s discuss how the new process works. Ober writes, “[The breakthrough] uses a two-step electrocatalytic process to convert carbon dioxide, electricity, and water into acetate, the form of the main component of vinegar. Food-producing organisms then consume acetate in the dark to grow.” A critical component of the electrocatalytic process is an electrolyzer. Ober explains, “Electrolyzers are devices that use electricity to convert raw materials like carbon dioxide into useful molecules and products.” According to Ober, the UC Riverside/University of Delaware team tweaked their electrolyzer so that “the amount of acetate produced was increased while the amount of salt used was decreased, resulting in the highest levels of acetate ever produced in an electrolyzer to date.”

Although Ober indicated the new process could help grow food “independent of sunlight,” that’s not quite the case — solar panels are involved. Nevertheless, the results of the team’s efforts are impressive. Ober reports, “Combined with solar panels to generate the electricity to power the electrocatalysis, this hybrid organic-inorganic system could increase the conversion efficiency of sunlight into food, up to 18 times more efficient for some foods.” To date, experiments have conducted on a limited number of organisms, “including green algae, yeast, and fungal mycelium that produce mushrooms.” Ober reports, however, “The potential for employing this technology to grow crop plants was also investigated. Cowpea, tomato, tobacco, rice, canola, and green pea were all able to utilize carbon from acetate when cultivated in the dark.”

If you’re wondering why anyone would want to grow food in the dark, Ober explains, “By liberating agriculture from complete dependence on the sun, artificial photosynthesis opens the door to countless possibilities for growing food under the increasingly difficult conditions imposed by anthropogenic climate change. Drought, floods, and reduced land availability would be less of a threat to global food security if crops for humans and animals grew in less resource-intensive, controlled environments. Crops could also be grown in cities and other areas currently unsuitable for agriculture, and even provide food for future space explorers.”

Even if growing crops in total darkness proves infeasible, the research could provide other benefits. Marcus Harland-Dunaway, a UC Riverside doctoral candidate and co-lead author of the study, told Ober, “We found that a wide range of crops could take the acetate we provided and build it into the major molecular building blocks an organism needs to grow and thrive. With some breeding and engineering that we are currently working on we might be able to grow crops with acetate as an extra energy source to boost crop yields.” Increased crop yields are important as the global population continues to grow and needs to be fed.

What are the drawbacks?

Science writer Matt Reynolds (@mattsreynolds1) agrees that the new process holds some promise. After all, he writes, “solar panels … are many times more efficient than plants at turning sunlight into energy.”[2] He also notes that the results were not as positive as Ober made them seem. He explains, “Before you shut away your tomato plants in a cupboard, a word of warning. [Robert Jinkerson, a professor at the University of California,] and his colleagues only knew that the plants were eating the acetate because they dissolved them after they’d grown for a little while and analyzed them to see whether they contained any carbon molecules from acetate. But giving the plants enough acetate to grow on ended up proving toxic to them — so although plants can technically grow on acetate, they don’t exactly thrive on it. This means that we’re a long way from being able to grow any common commercial crops in the dark.”

Reynolds believes the area of greatest promise for this new process is vertical farming. As I noted in a previous article, energy costs for powering lights and water pumps in vertical farms is expensive.[3] Since the new process relies on solar panels, the solar panels could perform double-duty. Reynolds explains, “This technology could be of interest for vertical farms, which already run up huge electricity bills on LED lights that power photosynthesis for their plants. Jinkerson thinks that if researchers can find a way to grow tomato plants that really thrive on acetate, it could be a much more energy-efficient way for vertical farms to divert electricity to acetate production instead of lighting.”

Basic economics, however, dictates what crops are likely to be grown indoors or outdoors. Reynolds explains, commodity crops, such as wheat, soy, or corn, “are extremely cheap to grow outside, so investing lots of time and money to grow them indoors doesn’t make a whole lot of sense.” That doesn’t mean work related to photosynthesis won’t prove valuable. Amanda Cavanagh, a plant scientist at the University of Essex, told Reynolds, “Finding ways to improve photosynthesis rather than bypassing it altogether might end up having a bigger impact on the world.” She added, “For things like soybean or maize or wheat, our inefficient photosynthesis is likely still to be our best bet for realizing gains in those crops.”

Even then, the biggest challenge to improving crops, indoors or outdoors, may be cultural. As Reynolds notes, many improved crops yields rely on genetically-modified organisms (GMO), including Jinkerson’s work. As a result, he writes, “[This] raises some tricky questions about the kinds of food people will accept. Much of the work on improving photosynthesis involves gene-editing plants, which is still a controversial technology in parts of the world — particularly in the EU.”

If the world’s growing population is going to have enough food to eat in the years ahead, the agricultural sector must continue to explore every possible avenue to improve crop yields. Elizabete Carmo-Silva, a professor of crop physiology at Lancaster University, told Reynolds, “If we really want to tackle the challenge of food security and have food security everywhere in the world, we need to address it with multiple solutions.” Growing food indoors, when conditions outdoors are inhospitable, is just one of those solutions.