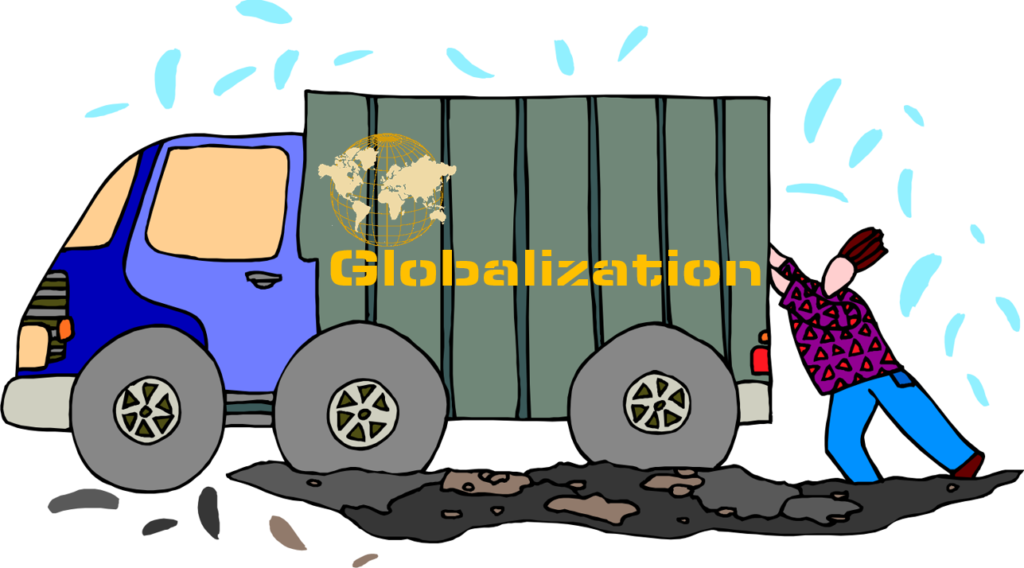 “Globalization’s opponents in the emerging markets and developing countries have been joined by tens of millions in the advanced countries,” writes Joseph E. Stiglitz (@JosephEStiglitz), a Nobel laureate and a professor at Columbia Business School. “Opinion polls, including a careful study by Stanley Greenberg and his associates for the Roosevelt Institute, show that trade is among the major sources of discontent for a large share of Americans. Similar views are apparent in Europe. How can something that our political leaders — and many an economist — said would make everyone better off be so reviled?”[1] Discontent over trade and globalization were particularly evident during the 2016 presidential campaign in America. Stiglitz indicates such discontent is no surprise. He explains:

“Large segments of the population in advanced countries have not been doing well: in the United States, the bottom 90 percent has endured income stagnation for a third of a century. Median income for full-time male workers is actually lower in real (inflation-adjusted) terms than it was 42 years ago. At the bottom, real wages are comparable to their level 60 years ago. The effects of the economic pain and dislocation that many Americans are experiencing are even showing up in health statistics. For example, the economists Anne Case and Angus Deaton, this year’s Nobel laureate, have shown that life expectancy among segments of white Americans is declining. Things are a little better in Europe — but only a little better.”

Although it is undeniable that globalization has raised millions out of poverty around the world, the fact remains benefits of globalization have been uneven — resulting in winners and losers. And, as should be expected, the losers are unhappy.

Martin Wolf (@martinwolf_) asks, “Has the tide of globalization turned? This is a vitally important question. The answer is closely connected to the state of the world economy and the west’s politics.”[2] If the tide has turned against globalization, the next question needing an answer is: Why? Stiglitz’ observation about stagnant wages and economic dislocation provide part of the answer. But other factors also come into play. Globalization is all about flows. The flow of people. The flow of capital. The flow of resources. And the flow of ideas. Most of these flows are having difficulty. Take for example the flow of people. Political unrest, wars, and climate change have resulted in massive dislocations of people. Wolf notes, “Migration raises quite specific issues. The era of globalization was not accompanied by a general commitment to liberalizing flows of people.” Since many of the unlucky refugees come from areas exporting terrorism, xenophobia is on the rise. Stiglitz notes, “Trade in goods is a substitute for the movement of people.” That is, in a perfect world, there would be few economic refugees because potential refugees would be gainfully employed in their native lands. But this is not a perfect world and the flow of goods and resources is also in trouble. Wolf reports, “Ratios of world trade to output have been flat since 2008, making this the longest period of such stagnation since the second world war.” The consequences of this stagnation, according to Wolf, are staggering. “Globalization is no longer driving world growth.”

Without growth in the global economy, the negative effects of globalization become readily apparent. Stiglitz explains, “Importing goods from China — goods that require a lot of unskilled workers to produce — reduces the demand for unskilled workers in Europe and the United States. This force is so strong that if there were no transportation costs, and if the United States and Europe had no other source of competitive advantage, such as in technology, eventually it would be as if Chinese workers continued to migrate to the United States and Europe until wage differences had been eliminated entirely.” In other words, when the global economy is not growing, cheap labor wins and discontent rises in more developed countries. The consequences of economic stagnation, Wolf asserts, is the stalling of trade and a steady rise in protectionist measures.

Chris Giles (@ChrisGiles_) and Shawn Donnan (@sdonnan) report, that a study by the Resolution Foundation, found that globalization was not the only contributing cause to the woes of middle class families in the developed world. Torsten Bell, director of the Resolution Foundation, told them, “Globalisation is not to blame for all the ills of the world. Although globalization brings a range of challenges for lower income families, we need to be clear that weak income growth generally is rooted in domestic policy, and blaming globalization takes the pressure off governments.”[3] The Organization for Economic Cooperation and Development (OECD), concerned about the discontent noted by Stiglitz and Wolf, urges governments to fight against this backlash. Paul Hannon (@PaulHannon29) reports, “In its quarterly report on the world economy, the OECD said a revival in trade would boost productivity, and aid economic growth around the world.”[4] OECD Chief Economist Catherine Mann (@CLMannEcon) told Hannon, “Voters have to understand the costs of a retreat from globalization in terms of higher prices for goods and services and slower growth, despite disappointments with some of its consequences.”

Dani Rodrik (@rodrikdani), a professor of international political economy at Harvard University, insists, “The social bargain in the advanced democracies that sustained a generous welfare state alongside economic openness has come undone. Trust in governments has declined, along with their ability to manage their economies. The possibilities of easy industrialization that fueled Asia’s economic miracles — most notably China’s — have dried up. Immigration, trade and the free flow of capital have become hot-button issues. Yet we should not fret too much about a reversal in globalization. We should instead take it as an opportunity to redress the imbalance between global markets and national responsibilities.”[5] Like Mann, Rodrik believes politicians are to blame for much of tarnish associated with globalization. “The frustrations of the middle and lower classes today,” he writes, “are rooted in the perception that political elites have placed the priorities of the global economy ahead of domestic needs. Addressing the discontent will require that this perception is reversed.” He adds, “Healthier polities produce — and can withstand — more globalization. A reassertion of the nation state may be inimical to hyper-globalization but as long as it is made in the service of social inclusion, robust economic growth and liberal democracy, it will serve the needs of an open world economy quite well.”

Douglas Holtz-Eakin (@djheakin), President of the American Action Forum, notes, “The entry of China and India into the world trading system was … an enormously successful global anti-poverty program.”[6] That success touched other developing countries as well and millions of people were lifted out of poverty. Millions of more people still firmly held in poverty’s grasp also need help. Holtz-Eakin admits, “It is also true that [globalization’s] effect on global wage scales was far greater than anticipated, and Western policy responses were inadequate to deal with the fallout. Globalization is neither a resounding success nor an unmitigated disaster; the truth lies in between.” Concerning the current stagnation of trade and globalization, he writes, “Any notion that this ‘new normal’ is somehow acceptable should be immediately discarded. Structural reforms to entitlements, the tax code, the regulatory state and education systems are necessary complements to trade agreements and globalization. Trade economics is not a zero-sum game, but the faster the economic growth, the more the general public will believe this.”

Sparking growth in the global economy will not be easy. As Holtz-Eakin observes, too many people perceive this stagnation as the new normal. Most of the pundits cited above have their own notions about how economic growth can be sparked to life and I recommend you read their thoughtful comments. The point is that globalization needs to be tweaked in order to ensure there are more winners than losers. Millions of people living at the bottom of economic pyramid deserve a better life — and so do workers who have been adversely affected by past waves of globalization. Clint Reiser (@ClintReiser), a Supply Chain Software Industry Analyst at ARC Advisory Group, asserts, “I believe that politicians and the average person understand the benefits of global trade. We just need to remind ourselves of trade’s benefits every once in a while.”[7] Wolf asks, “Does globalization’s stalling matter?” His answer is a resounding “Yes.” He concludes, “The era of globalization has seen the first fall in global inequality of household incomes since the early 19th century. Between 1980 and 2015, average global real income rose by 120 per cent. The opportunities afforded by globalization are vital. Our future cannot lie in closing ourselves off from one another.”