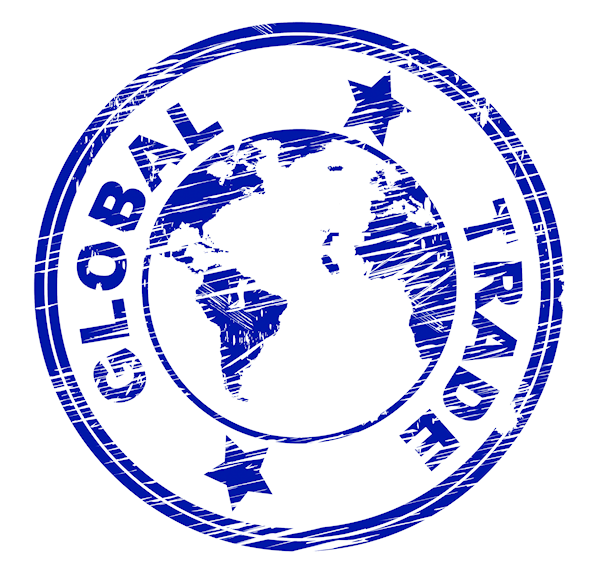 There has been plenty of bad supply chain news over the past year. At the beginning of the pandemic, some analysts believed the global supply chain was on the verge of breaking. At the time, Bain & Company analysts observed, “Leaders must grapple with a longer-term question: How should we retool our supply chain to protect against shocks while staying competitive on cost and value? For years, ‘faster, cheaper and more efficient’ has been the supply chain manager’s mantra. Quick delivery, lean operations and a widely distributed footprint have been the top priorities. But in a matter of a few short weeks, the global coronavirus panic demonstrated starkly that many management teams have vastly underestimated the value of supply chain resiliency and visibility. Shoring up their supply chains and shielding them against future shocks will challenge leaders to strike a new equilibrium between efficiency and reliability. But the challenge also opens up an important opportunity to create value.”[1]

One of those “future shocks” occurred when the Suez Canal was blocked for days by a grounded container ship — the Ever Given. The Suez Canal is one of the globe’s major waypoints for seaborne traffic. Journalists Costas Paris (@CostasParis), Parmy Olson (@parmy), and Sarah McFarlane (@sarah_mcfarlane) reported, “Some 19,000 vessels crossed the Suez in 2020.”[2] Blockages or delays in any vital waypoint, be it a canal, a strait, or a port, can create major problems. Edward Segal (@EdwardSegal), former CEO of two trade associations, writes, “To the untrained eye, supply chains can appear to be strong, dependable, and built on a solid foundation. But as the Suez Canal crisis shows, looks are deceiving.”[3] Following year-long discussions about supply chain resilience, the Economist reminds us, “Resilience comes not from autarky but from diverse sources of supply.”[4]

The Value of the Global Supply Chain

Journalist Jennifer Smith (@jensmithWSJ) writes, “Maritime tracking data shows the cargo snared by last month’s blockage as a snapshot of global trade that is usually in constant motion. The varied goods in the containers illustrate the far-flung nature of modern supply chains and show how transportation problems on one side of the world can affect the production of goods and store inventories thousands of miles away.”[5] Included in Smith’s article is a snapshot of the various types of goods snarled in the Suez Canal fiasco and where they were headed (see below). 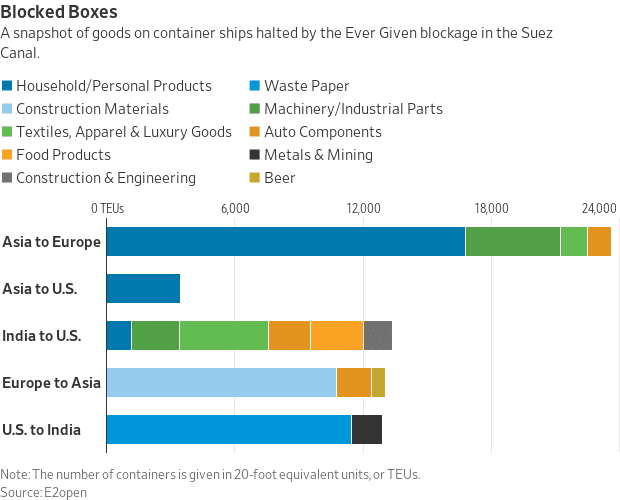 Despite the supply chain challenges faced this past year, analysts from Boston Consulting Group (BCG) argue global trade remains important for people of all nations. “For the past few years, in many parts of the world, a protectionist mindset has been challenging the continuing trend of globalization. This mindset, if it spreads further, could endanger the many benefits of more open international trade — which include allowing multinational supply chains to become more flexible and versatile, giving consumers throughout the world better selection and lower prices, and helping pull hundreds of millions of people out of poverty.”[6] Research conducted by BCG and HSBC, in which they analyzed a range of scenarios — from rising protectionism to liberal trade policy reform — determined that a more open trade scenario “could drive CAGR gains of up to about 2.0 percentage points each year through 2025, representing a nearly $10 trillion increase versus a status quo scenario.” As a result, they note, “[Global trade could] play a powerful role in the post-COVID-19 economic recovery.” Unfortunately, reports the Economist, the scenario playing out runs counter to the one recommended by the BCG analysts. They write:

“A semiconductor shortage is forcing car firms to idle plants all over the world. China has imposed a digital boycott of H&M, a Western retailer that appears unwilling to source cotton from Xinjiang, where the Communist Party is locking up Uyghurs and pressing them into forced labor. The European Union and India have clamped down on vaccine exports, disrupting the world’s efforts to get jabs into arms. As they battle the pandemic and face up to rising geopolitical tensions, governments everywhere are switching from the pursuit of efficiency to a new mantra of resilience and self-reliance.”

The magazine goes on to argue that retreating from global trade would be a huge mistake.

Why the Global Supply Chain is a Strength — Not a Weakness

The Economist admits, “It makes sense for supply chains to be more robust. When national security is at stake, governments have a role in making supplies more secure.” At the same time, the magazine explains, “The world must avoid a stampede back from globalization that would not only cause great harm, but also create unforeseen new vulnerabilities.” The BCG analysts agree. They assert, “If increasing protectionism prevails around the world, it will impose a persistent drag on GDP growth in a global economy already struggling to recover from the COVID-19 pandemic.” Analysts from the Economist believe current populist and nationalist trends will end up accomplishing exactly the opposite of what their proponents hope to achieve. They explain, “The preference for domestic jobs and manufacturing and promise of subsidies could mark a point at which the world shifts away from free trade and open markets. Such a lurch towards autarky would not be justified. One reason is that government-administered, domestic supply chains are even less resilient than global ones. … Self-reliance sounds safe, but politicians and voters must remember that their meals, phones, clothes and jabs are all the product of global supply chains. The call for self-reliance also misconstrues the balance between the costs of interdependence, which are brief and visible, and its benefits, which trickle in month after month unheralded.”

The Economist observes, “Supply chains encompass some of the most sophisticated forms of human endeavor.” Mark van Rijmenam (@VanRijmenam), founder of Datafloq takes that thought a step further. He writes, “In today’s complex world, it is short of a miracle how we have been able to create global supply chains that move products across the globe at breakneck speed.”[7] The article in the Economist concludes with this plea: “Resilience comes not from autarky but from diverse sources of supply and constant private-sector adaptation to shocks. Over time, global firms will adjust to even long-term threats, including tension between America and China and the effects of climate change, by gradually altering where they make fresh investments. This is a perilous moment for trade. Just as globalization begets openness, so protection and subsidies in one country spread to the next. Globalization is the work of decades. Do not let it run aground.”