In 1947, singer/songwriter Merle Travis wrote the song “Smoke! Smoke! Smoke!” for the famous country-western songwriter and entertainer Sollie “Tex” Williams. The song was a million seller. The chorus of that song goes like this:

Smoke, smoke, smoke that cigarette Puff, puff, puff until you smoke yourself to death. Tell St. Peter at the Golden Gate That you hate to make him wait, But you just gotta have another cigarette.

Ironically, Williams, a heavy smoker, died from cancer. Merle Travis eventually recorded his own version of the song and other singers, including Phil Harris and Jimmy Dean, also had hits with the tune. The song strikes a note with smokers and non-smokers alike. In 1947, however, the health effects of smoking were not widely known. In fact, some cigarette manufacturers touted the health benefits of their product. A lot has certainly changed since those days — or so one would think. In the developing world, tobacco companies are pushing their products with a vengeance and the health consequences are severe. Two well-known billionaires — Bill Gates and Michael Bloomberg — are teaming to try and stop people in developing countries from smoking [“Billionaires Back Antismoking Effort,” by Donald G. McNeil, Jr., New York Times, 24 July 2008]. 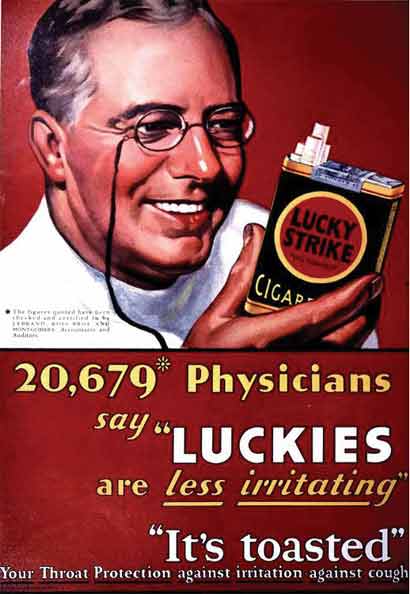 “The World Health Organization estimates that tobacco will kill up to a billion people in the 21st century, 10 times as many as it killed in the 20th. This time, most are expected to be in poor countries like Bangladesh and middle-income countries like Russia. In an effort to cut that number, Mr. Bloomberg’s foundation plans to commit $250 million over four years on top of a $125 million gift he announced two years ago. The Bill and Melinda Gates Foundation is allocating $125 million over five years.”

This is not the first time that the Gates Foundation has tackled a growing health issue in the developing world or worked with other philanthropists. Another famous billionaire, Warren Buffett, pledged the bulk of his considerable fortune to support the work of the Gates Foundation.

“Since 1999, the Gates Foundation has spent more than $2 billion on AIDS programs and about $1.2 billion on malaria. Mr. Gates has just left his Microsoft post for full-time foundation work and said he intends to form partnerships with other philanthropists.”

A former smoker, Bloomberg has been supporting anti-smoking efforts for years, including a tobacco control program at Johns Hopkins University that trains foreign students in public health issues. At the news conference announcing the new partnership, Bloomberg called himself both optimistic and realistic.

“‘All the money in the world will never eradicate tobacco,’ he added. ‘But this partnership underscores how much the tide is turning against this deadly epidemic.’ The new donations far outstrip current spending of about $20 million a year on antismoking campaigns in poor and middle-income countries, according to a recent W.H.O. report. The $500 million would be spent on a multipronged campaign — nicknamed Mpower — that Mr. Bloomberg and Dr. Margaret Chan, director of the health organization, outlined in February. It coordinates efforts by the Bloomberg Initiative to Reduce Tobacco Use, the World Health Organization, the World Lung Foundation, the Johns Hopkins Bloomberg School of Public Health, the foundation of the Centers for Disease Control and Prevention and the Campaign for Tobacco-Free Kids. It will urge governments to sharply raise tobacco taxes, prohibit smoking in public places, outlaw advertising to children and cigarette giveaways, start antismoking advertising campaigns and offer people nicotine patches or other help quitting. Health officials, consumer advocates, journalists, tax officers and others from third world countries will be brought to the United States for workshops on topics like lobbying, public service advertising, catching cigarette smugglers and running telephone help lines for smokers wanting to quit. A list of grants is at tobaccocontrolgrants.org.”

It should come as no surprise that not everyone greeted the news of this new campaign with enthusiasm.

“Catherine Armstrong, a spokeswoman for British American Tobacco — one of the Western tobacco companies that focuses on sales to the third world — would not comment directly on the new initiative. But she said, ‘We have no problem with government organizations educating people on the risks of tobacco.’ A spokesman for Philip Morris, which makes Marlboro, the world’s most popular cigarette brand, said the company agreed that children should be kept from smoking but thought that raising cigarette taxes promoted smuggling and counterfeiting.”

Gates and Bloomberg understand that they are fighting an uphill battle, but they believe it is a battle worth fighting. As one the people interviewed for the article commented, the campaign could save tens of millions of lives in his lifetime and hundreds of million of lives in children’s lifetime.

“The global campaign promises to be a struggle. Cigarettes not only are highly addictive and supported by huge advertising campaigns, they are also an important source of income for many foreign governments. In China and other countries, tobacco is a state-owned monopoly, and low- and middle-income countries collect $66 billion a year in tobacco taxes. Only about 5 percent of the world’s countries have any antismoking measures like those the campaign envisions. But Dr. [Richard] Peto, [an Oxford epidemiologist,] said antismoking campaigns were already having some effects, even in countries where no-smoking signs are often ignored. He surveyed thousands of tobacco users in China in the 1990s — ‘before the government was taking it seriously,’ he said — and found 4 percent who identified themselves as former smokers. Now, he said, 20 percent do. In India, where people have long chewed tobacco but widespread smoking is more recent, Dr. Peto said he found almost no one who had quit. ‘India is where China was in the mid-1990s,’ he said. Smoking is not widespread in most of Africa, where only about 20 percent of men smoke, and Mr. Gates said on Wednesday that he hoped to prevent a surge in smoking there.”

The article goes on to note that serious health issues and cancer deaths normally appear about four decades after smoking becomes widespread in a society. For the United States, awareness of health issues began to grow in the 1960s. Most developing countries are where the United States was in the 1930s and 1940s. Gates and Bloomberg hope that developing countries can learn from the experiences of the developed world and avoid many of the health problems. In my discussions about Development-in-a-Box™, I have noted that a healthy workforce is one of the things that potential investors look for before committing millions of dollars of foreign direct investment. Gates and Bloomberg know that prevention is better than cure, which is why they have committed millions to preventing people in the developing world from getting addicted to nicotine in the first place.