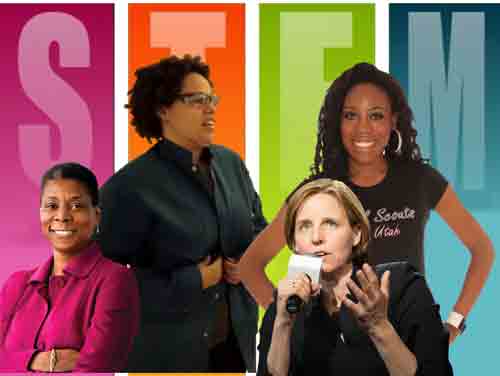 The diversity gap in STEM fields is well documented. Stephanie Walden reports, “According to the U.S. Department of Commerce, female employees fill fewer than 25% of STEM jobs — even though they make up nearly half of the overall workforce. In the startup world, just 5% of women head up their own companies. And these disheartening numbers haven’t changed much in the past decade.”[1] Women who enter STEM fields often find hostile work environments or hit glass ceilings. Some women, however, manage to overcome these hurdles and have flourished. Their stories are inspiring.

Take, for example, Sarah Richardson (@TheGermWrangler), a molecular biologist who researches ways to harness bacteria and their processes to help make new medicines and clean oil spills. Moira Muldoon reports, “Richardson is one of the five post-doctoral women scientists who has been awarded $60,000 to further her cutting-edge research through the L’Oréal USA For Women in Science fellowship program. She spends her days using computer programs she’s built to sift through mountains of data and think about how best to take care of the various bacteria needed to fuel scientific discoveries. In layman’s terms, Richardson is a bacteria-whisperer, or, as she calls herself, the Germ Wrangler. This work makes her a favorite of the high school students she mentors, encouraging them to consider careers in science.”[2] Muldoon also briefly discusses the other four awardees:

“Four other scientists won L’Oréal USA For Women in Science fellowships in 2015. Each is committed to mentoring. Marine microbiologist Julie Meyer is using the fellowship to make a documentary about the role of women in marine biology to help inspire young women to pursue a career in STEM. Astrophysicist Sarah Ballard runs a podcast about self-care for women in science and has spoken out about sexual harassment in the workplace. Bioengineer and breast cancer researcher Claire Robertson mentors women students in her lab and previously helped expand Rocket Science Tutors, an afterschool science program for disadvantaged middle school students. And condensed matter physicist Ming Yi is founding a support group for mothers in STEM. (Women in STEM who are mothers face bias in the workplace, including 37 percent of Asian women being told they should work fewer hours after having children).”

Thelina Smith is another inspiring young woman. Raised in humble circumstances by a hardworking and entrepreneurial mother, Smith was the first person in her family to go to college, graduating with a bioengineering degree from the University of Utah. Carrie Rogers-Whitehead reports, “[Smith’s] path from poverty to college and STEM advocacy, with a Miss Utah International title in between, was not easy.”[3] Smith told her, “I remember being in middle school and struggling in my science classes. I didn’t think I was good at science and I thought it was boring and didn’t see the real world’s application in my life.” Rogers-Whitehead continues the story:

“Despite her resistance, Smith had a teacher who kept trying to work with her and invited her to participate in the MESA program. MESA stands for mathematics, engineering, science and achievement. In MESA, Smith joined other students in a competition to build a mousetrap. That project sparked an interest which has stayed with her.”

Bless that teacher and the hands-on, project-based program that sparked Smith’s interest in STEM education. I’ve only touched on the highlights of Richardson’s and Smith’s life stories and I encourage you to read the articles published about them. For even more stories about women in STEM fields, read Vivek Wadwha’s and Farai Chideya’s book entitled Innovating Women, in which they relate more than 300 stories of successful women entrepreneurs in tech and discusses some of the challenges women face in the workplace. We need many more of those stories and we can help make them unfold. Walden reports, “Promising government initiatives, as well as NGOs, nonprofits, events and startups — all with the goal of introducing women and girls to STEM fields and futures — are on the rise.” She continues:

“Within the U.S., the White House has pledged not only to broaden the scope of STEM educational opportunities, but also to tackle the gender gap within technical and scientific fields — as well as encourage other underrepresented groups to pursue STEM careers. Beyond government initiatives, programs like the New York Academy of Sciences’ 1000 Girls — 1000 Futures, The Scientista Foundation and Million Women Mentors are just a few notable efforts making strides.”

Walden goes on to discuss similar programs in play around the world. Quinten Plummer identifies a few other organizations that are trying to increase diversity in STEM fields. “There are grassroots efforts to spur interest in STEM among women and minorities,” he writes, “such as Girls in Tech, Black Girls Code, the Anita Borg Institute, Women’s Startup Lab and others.”[4] The well-known comedic actor Amy Poehler is using social media to spike girls’ interest in STEM subjects. Michael d’Estries (@michaeldestries) reports, “Amy Poehler’s ‘Smart Girls’ initiative‘, which seeks to support and empower young women, has launched a new web series that’s equal parts science and satirical comedy. Hosted by Megan Amram, a comedian, writer on ‘Parks and Recreation,’ and author of “Science … For Her!,” the five-minute episodes feature simple science projects (such as making a potato clock or a baking soda volcano) as well as interviews with notable women in STEM (Science, Technology, Education and Math) careers.”[5] These are all great efforts; but, as Plummer notes, it amounts to “a few dozen non-profits … trying to reach out across a country with 157 million women and about 116 million minorities.” He is correct — a lot more can and needs to be done.

Last year, two women who have successfully overcome obstacles and risen to the top in tech fields — Megan Smith, chief technology officer for the United States, and Ursula Burns, chairman and CEO of Xerox — offered their suggestions on how to get more girls interested in STEM education.[6] Smith “shared her four-step plan to make the fields more diverse — and overcome the media image that math, science and technology are for ‘white boys.'” Those steps are:

1. Let girls “play.” Math and science should be about experimenting, and learning by doing.
2. Teach girls the history of science, and give context as to why it’s so important.
3. Genuinely encourage girls to pursue an education in STEM. (Ask them, “Are you taking computer science?”)
4. Let girls see themselves in the STEM fields by giving examples of women already in these jobs.

Burns agreed with those steps, but she particularly stressed step 4. “We need to give examples of what an engineer or scientist can look like,” she said, “People never believe I’m an engineer.” In every community, I recommend that concerned individuals get together and decide to do something rather than just sitting on the sidelines. I helped gather a group of concerned business people and academics living in the same area where I live to form a non-profit we call the Project for STEM competitiveness. It’s our hope that we can encourage young people of both genders and all races to get interested in STEM subjects through hands-on, project-based learning. We all know that world is facing a lot of challenges. Finding solutions to those challenges will require our best minds (both male and female). If we continue to discourage young girls from entering STEM fields, it will be the world’s loss.