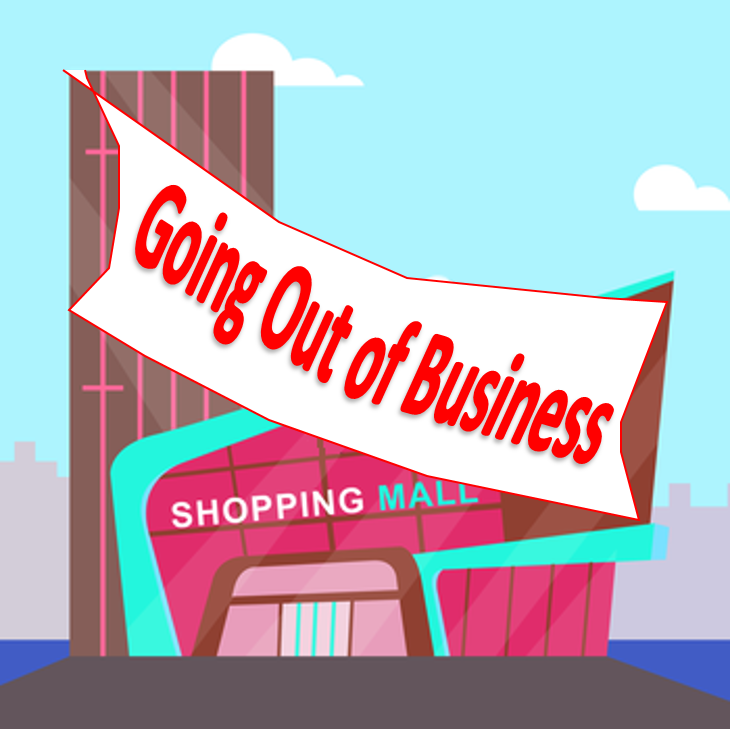 The Future of the Brick-and-Mortar Retail Sector

Almost every week another retailer seems to announce it is either closing hundreds of brick-and-mortar stores and/or filing for bankruptcy. This retail meltdown is only recently gaining the attention it deserves. Michael Corkery (@mcorkery5) reports, “More workers in general merchandise stores have been laid off since October, about 89,000 Americans. That is more than all of the people employed in the United States coal industry, which President Trump championed during the campaign as a prime example of the workers who have been left behind in the economic recovery.”[1] Derek Thompson (@DKThomp) adds, “From rural strip-malls to Manhattan’s avenues, it has been a disastrous two years for retail.”[2] If America were mired in a recession, this spate of bad news might be understandable. But Thompson observes, “GDP has been growing for eight straight years, gas prices are low, unemployment is under 5 percent, and the last 18 months have been quietly excellent years for wage growth, particularly for middle- and lower-income Americans.” He then asks the question so many people want answered, “What the heck is going on?”

The Rise of E-Commerce

Even though many people claim they still enjoy shopping in brick-and-mortar stores, the single biggest factor affecting the retail sector has been the rise of e-commerce. Thompson agrees e-commerce is probably the most important cause of for the demise of so many retailers; but, he also notes some other causes. He writes, “Several trends — including the rise of e-commerce, the over-supply of malls, and the surprising effects of a restaurant renaissance — have conspired to change the face of American shopping.” Surprised? You shouldn’t be. These trends have been discussed for years; especially, with regard to the generation known as millennials. Millennials love their smartphones and retailers have felt the impact. Thompson reports, “Between 2010 and last year, Amazon’s sales in North America quintupled from $16 billion to $80 billion.” I’ve seen predictions that Amazon could capture up to half of all retail sales over the next five years.

As for the second trend affecting the retail sector identified by Thompson — the overabundance of malls — he writes, “The number of malls in the U.S. grew more than twice as fast as the population between 1970 and 2015, according to Cowen Research.” That trend, however, has ended. Thompson notes, “There are about 1,200 malls in America today. In a decade, there might be about 900. … Mall visits declined 50 percent between 2010 and 2013, according to the real-estate research firm Cushman and Wakefield, and they’ve kept falling every year since.” It’s rare today to walk through a retail or outlet mall without seeing a number of vacant storefronts. I agree with Thompson that we are in the midst of large retail sector readjustment rather than witnessing the complete demise of brick-and-mortar retailers. Numerous surveys have concluded people of all ages still enjoy the experience shopping in physical stores. I stress the word “experience” because up and coming generations have shown a penchant for spending money on experiences rather than things. Which is a good segue to Thompson’s third trend affecting the retail sector — the restaurant renaissance.

It’s not just restaurants that find themselves in flush times, almost all experiential businesses are enjoying an uplift. Thompson explains, “Clothing stores have declined as consumers shifted their spending away from clothes toward traveling and dining out. Before the Great Recession, people bought a lot of stuff, like homes, furniture, cars, and clothes, as retail grew dramatically in the 1990s. But something big has changed. Spending on clothes is down — its share of total consumer spending has declined by 20 percent this century. What’s up? Travel is booming. Hotel occupancy is booming. … The rise of restaurants is even more dramatic. Since 2005, sales at ‘food services and drinking places’ have grown twice as fast as all other retail spending.” Krystina Gustafson (@KrystinaGustafs) adds, “The flight toward urban living and memories of the financial crisis have inspired many millennials to live frugally and free of clutter.”[3] To offset the fact that clothing spending is down, Gustafson notes that some retailers are diversifying their inventories. “They can then use their rounded-out assortment,” she writes, “to get shoppers adding incremental items to their baskets.” First, however, you need to get them in the store.

The Future of Brick-and-Mortar Retailing

For several years now, analysts have been telling retailers they need to make their stores an experience destination. According to Corkery, some stores are listening. He reports, “Retailers have hoped that their traditional stores, by offering catchy displays and top-notice service, can lure shoppers away from their screens. Some of the best evidence that brick-and-mortar retail is still viable may be Amazon’s experimentation with operating physical stores of its own.” The question remains: How do retailers have to change to make store shopping a better experience? Elizabeth Paton (@LizziePaton) asks a few more related questions.[3] “What will the store of the future look like? Will we be served by fleets of gleaming robots, using built-in facial recognition technology to adjust each sales pitch to a person’s current mood or past spending preferences? Will there be voice-activated personal assistants, downloading the availability, color and fit of any and every garment to your smartphone? Three-D printing stations? No checkout counters when you leave? Could there even be floating, holographic product displays on the shop floor that change when a customer walks by?”

Almost everybody seems to agree that big changes are coming. In an interview with Michael Dart, a strategy and private equity consultant, and Robin Lewis (@robinreport), CEO of the Robin Report, Jeff Gennette, CEO of Macy’s Inc., stated, “Department stores will be re-imagined, services and experiences will be ramped up. … I think omnichannel retailing will continue to evolve. … We have to commit to winning before the store as much as in the store. Browsing is now online vs. in-store, so our digital experience must be curated and inspirational to her. Store visits are now mission-based, so we need to make store experiences easier, fun and educational.”[5] Paton insists consumers are looking for a more personalized experience when they enter a store. “In an ever-more-volatile and unpredictable shopping environment,” she explains, “where long-term survival is dictated by anticipating and catering to consumers’ desires (often before they themselves even know what they want), the race to find out how and where people will do their spending has started to heat up.” Jonathan Chippindale, CEO of Holition, told Paton, “The holy grail now for retailers is creating digital empathy. No one can really guess what the future will look like. But those who are using technology and data to create bespoke shopping experiences that recognize every person is different, and with different needs, are more likely to come out on top.”

Corkery worries about the societal fallout of the declining brick-and-mortar retail sector. “The job losses in retail could have unexpected social and political consequences,” he writes, “as huge numbers of low-wage retail employees become economically unhinged, just as manufacturing workers did in recent decades. About one out of every 10 Americans works in retail.” Unfortunately, those jobs are not coming back. Physical stores are changing and there are going to be fewer of them. Gennette insists, “‘End-to-end’ customer experience journey mapping is the new frontier for all of us and the answers are not monolithic. Boomers still shop by brand, love the thrill of a sale, respond to direct mail, and put up with coupon exclusions. Millennials want to shop by lifestyle, reject complicated sales math, and invest more in experiences and data plans than they do in apparel and accessory purchases. So, a balanced strategy is required for a department store moving forward: address the needs of your core customer while adapting your goods, services, and touch points for your future ones.”