Harvey Hartman notes that there are a few powerful voices in food sector who punch above their weight when it comes to establishing food trends. One of those voices is Alice Waters (@AliceWaters), who is a proponent of fresh, less processed food. [“Reflections on Food Culture: The Forces that Shape Consumer Behavior,” SmartBlog on Food & Beverage, 1 July 2014] “Waters pioneered — and politicized — a new way of thinking about food that chose as its motif the romance of an imagined, premodern past,” writes Hartman. He reports that Waters has put her ideas about food in action in her restaurant Chez Panisse. He goes on to quote Emma Marris (@Emma_Marris), who observes in Slate, “So successful was her recipe for authentic food that the values she braided together into Chez Panisse’s winning formula — fresh, local, seasonal, sustainable, traditional and simple — now seem inseparable.” Undoubtedly, the “fresh, local, seasonal, sustainable, traditional and simple” trend will continue to play a role in the thinking of both restaurateurs and home cooks; but, Hartman asks, “Are consumers putting these ideas into practice in the way Waters intended? We love our farmers markets, but are we there to trace the relationship of our food to its source, or do we just like to wander in the sunshine buying groovy-colored honey?” He continues:

“Recently, new voices have emerged as an alternative to Waters, creating a slight shift in food culture and consumer behavior. As Marris reports, chefs such as Daniel Patterson and René Redzepi, whose restaurant Noma is among the best in the world, freely tinker with technology to access what they believe is the essence of natural ingredients in a way that’s not possible by simply eating a carrot from Alice’s garden. Redzepi describes one dish of dehydrated scallop chips on boiled grains: ‘We’d made a dish with no reference points in the past nor in other lands.’ This postmodern stance eschews politics in favor of creativity and is not necessarily at odds with sustainability. But why pay attention to it? At the risk of sounding simplistic, wouldn’t you want to be out ahead of the curve? To build the foundations to great brand and retail legacies while your competitors are heads down in the trenches of today, struggling for relevance in an increasingly crowded marketplace?”

A lot of food companies, including McCormick & Company, are constantly scanning the globe looking for new trends in food. McCormick agrees with Hartman that a great brand needs to remain relevant and ahead of the curve. Even so, Alan Wilson, chairman, president and chief executive officer of McCormick, admits, “Rather than remain loyal to a particular brand, today’s consumers may be more open to trying a variety of products to meet their needs.” [“McCormick: Brand loyalty out, ethnic flavors in,” by Monica Watrous, Food Business News, 2 June 2014] Earlier this year, Wilson told an audience at the Sanford C. Bernstein Strategic Decisions Conference in New York:

“At different times, consumers are concerned about everything from gluten-free to organic to healthy to low-salt, and they are kind of spread across, and that is true both in Q.S.R. [quick serving restaurants], in casual dining as well as in packaged foods. And so what people are trying to do is find a way to meet that demand, and more and more what we see are consumers are looking for variety and they are not necessarily thinking of the long-established brands as they do that. So, they are open to trying a whole lot of different kinds of products. … It does all kind of come back to flavor. If stuff doesn’t taste good, consumers aren’t going to buy it. And so while we see consumers will say they have a high interest in healthy and low-salt, if they don’t like the flavor of it, they aren’t going to necessarily buy it. So, while the industry has done a good job of reducing salt and fat and sugar in products, consumers are still buying a lot of the stuff that they have said they would rather have other options.”

One of the trends that McCormick has identified is a growing appreciation of ethnic foods. Watrous reports, “Growing demand for global flavors has sparked recent innovation at McCormick, which said 44% of all U.S. flavor occasions involve cuisine-specific or ethnic fare.” Mike Esterl (@mikeesterl) reports another trend that seems to be gathering momentum is snacking. “Americans are becoming serial snackers,” he writes. “What started as grazing more than three decades ago has turned into willy-nilly consumption patterns, disrupting the American diet of three meals a day and making the pillars of peanut-butter and jelly sandwiches for lunch and bacon and eggs for breakfast a part of the past — and roiling the food industry in the process.” [“Forget Dinner. It’s Always Snack Time in America,” The Wall Street Journal, 2 July 2014] Esterl asserts, “Once considered an indulgence — a few cookies or handful of potato chips— a snack now seems to be anything small, increasingly nutritional and portable that complements or replaces a meal.” He back up his assertion with the following graph. 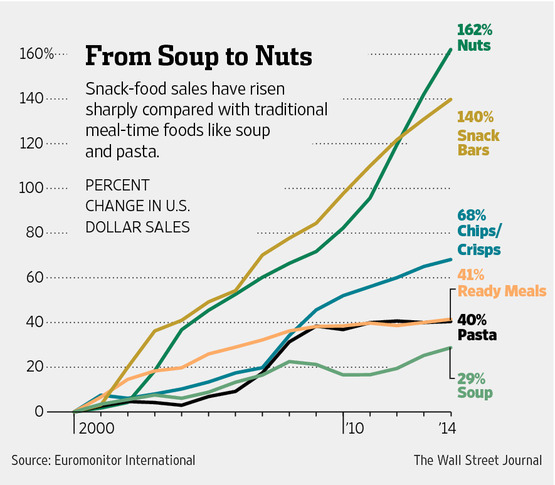 Esterl offers a few reasons why the snacking craze is growing. “Today’s snack revolution is driven by rapidly changing demographics: the rise in single-person households, the increase in baby boomers with empty nests and the increasingly hectic lives of two-career families. Demands on the kids have ramped up, too. Little League often trumps the family dinner. All that makes it tough to squeeze in time to eat a meal, let alone plan, shop or cook.” The food industry is obviously aware of the trend and is betting that the reasons cited by Esterl will continue to affect the food industry. That’s why many companies are betting that drinkable food will become one of the next big trends. [“Food Makers Bet U.S. Wants Drinkable Food,” Manufacturing.net, 2 July 2014] The article notes that Hormel, most famous for its Spam brand, recently bought Muscle Milk for $450 million. The article continues:

“The demand for portable, easy-to-eat foods has been growing, and Hormel isn’t the only company hoping that can include liquid food that comes in the convenience bottle. Here are some other examples:

— Campbell Soup in 2012 announced it was buying Bolthouse Farms, which offers products including premium juices and bottled smoothies.

— General Mills Inc. introduced a dairy-based drink last year called ‘BFast’ that has whole grains and promises the nutrition of a bowl of cereal and milk.

— Kellogg Co. also rolled out its ‘Breakfast To Go,’ which is positioned as a drinkable cereal.

— PepsiCo CEO Indra Nooyi has noted the company is looking at ways to ‘drinkify’ snacks. The company’s Naked juices are already seen as falling into that area because of the various nutrients they provide.

— PepsiCo’s Quaker Oats division also now offers a breakfast shake at select retailers that is positioned as oatmeal in a bottle — it boasts of 8 grams of whole grain oats, 10 grams of protein and 6 grams of fiber.”

Trying to keep up with changing food trends so that you can remain ahead of the curve is a constant (and not an easy) task. Hartman offers four suggestions that may help:

“STOP PENDULUM-SHIFT THINKING: Avoid taking a revolutionary perspective on trends — the idea that new trends must, by definition, refute previous or current trends.

DON’T ABANDON FRESH & QUALITY: As professional chefs — and increasingly consumers — begin to tinker with food science technology to provide higher-quality experiences, do not assume that the trend toward fresh, local and seasonal will subside.

REDEFINITION OF QUALITY: The sum total of ideas, preferences, desires, techniques and ‘ways of doing’ that have characterized trends in the food world for the past 30 years (be they about all things fresh and local or all things technological) point to one inescapable conclusion: The overriding impulse is toward the redefinition of quality — the foundational restructuring of what it means to enjoy a quality food experience.”

I agree with McCormick’s Alan Wilson, in the end, people will consume food that tastes good. In the future, some of that food may be eaten (or drunk) on the go.