Home » Food and Drink » Fatty Foods Taste Good — Fat, Not So Much! 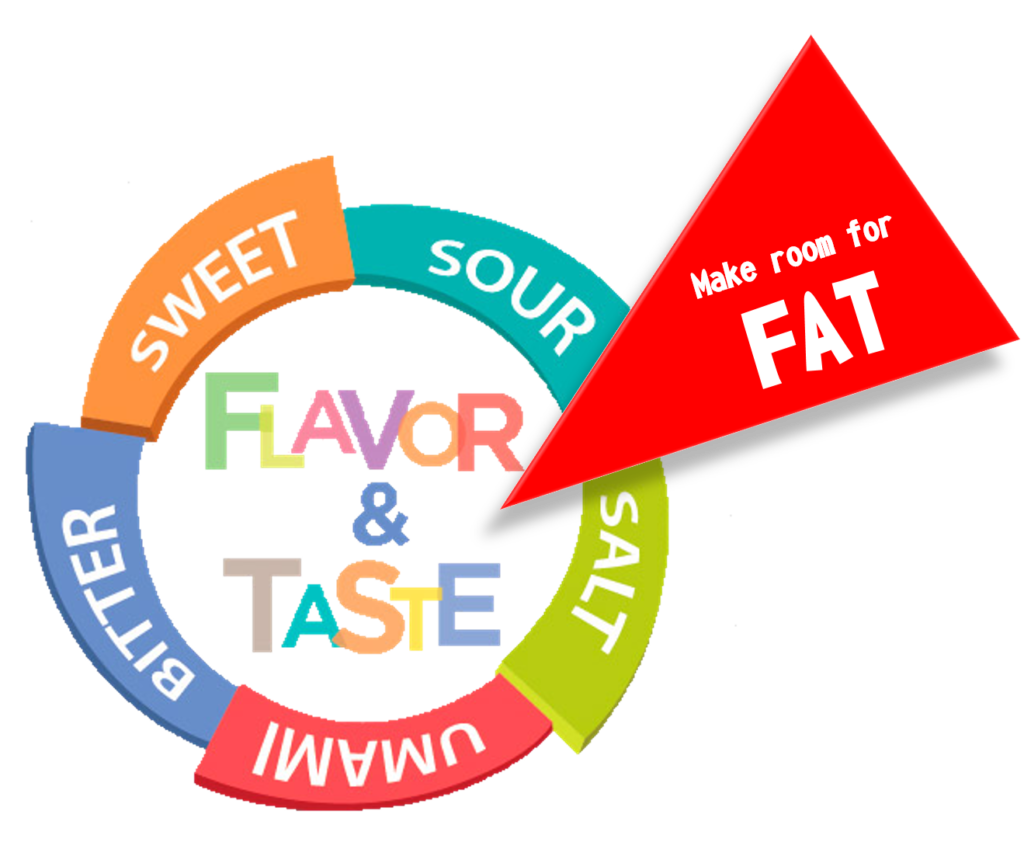 Fatty Foods Taste Good — Fat, Not So Much!

“You may have a love-hate relationship with fat and not even realize it,” writes Sara Elliott. “Fat may inspire loathing when it’s installed on your thighs or midsection, but it may taste positively divine on your tongue.”[1] Well, that may not be exactly true. In a recent experiment by researchers at Purdue University, participants were placed in a specially lit room and given “nose clips so they couldn’t mistake the aroma of food for taste and then had them try different concentrated samples and sort them by taste including sweet, salty, sour, bitter and blank. In the study 64% of participants could distinguish a fatty acid sample from the group. While a fatty food taste test may seem to have been a dream come true, subjects reported samples with shorter fatty acid chains tasted sour and with longer fatty acid chains tasted pungent or irritating.”[2] Professor Richard Mattes, who has been working on this challenge for years, noted, “At high concentrations, the signal [a fatty acid] generates would dissuade the eating of rancid foods.”[3] Professor Mattes’ team was trying to determine, once and for all, whether fat was a taste like salty, bitter, sweet, sour, and umami. As Roberto A. Ferdman (@robferdman) explains, “For hundreds of years, scientists have known about four basic tastes: sour, sweet, salty and bitter. More recently, a Japanese chemist discovered a fifth basic taste, umami, which is triggered by monosodium glutamate, or MSG, as it’s more widely known. Umami, perhaps best described as savory, is especially prevalent in truffles, meat and anchovies. And now, scientists believe they have found a sixth basic taste that could profoundly change the way we eat.”[4] If you want to learn more about how umami was discovered, read my article entitled “The Taste of Umami.” Since the term “fat” doesn’t sound very scientific, researchers are using the term “oleogustus.”

As noted above, to determine whether something is really a “taste,” researchers have to isolate the sense of taste from other senses, especially the sense of smell. Jenn Savedge explains, “When researchers talk about taste, they’re talking about something that can be perceived with the tongue alone. Close your eyes and plug your nose and you will recognize salt if it is sprinkled on your tongue. Next comes flavor, which is what we perceive when both taste and smell work together. Without your nose, you may taste something as sweet, but you won’t recognize it as chocolate without the aroma.”[5] For years scientists believed that fat was only perceptible in a cross modal way (i.e., through the use of more than one sense). As Savedge writes, “Until now, researchers assumed that fat was a texture that could be felt in its creaminess but not specifically tasted.” If the taste of fat is as bad as we’re being told, it begs the question: Why do foods containing fat taste so good? Mattes has been working to answer that question for more than a decade; however, Kathy A. Svitil reports that Mattes isn’t the only researcher working to answer that question. She writes, “No matter how cleverly prepared, fat-free foods never seem satisfying. Now we know why. Nutritionist Philippe Besnard of the University of Burgundy in France has found that the 10,000 taste buds on the tongue seem to include a type that specifically responds to the flavor of fat.”[6] Besnard’s findings strengthen Mattes’ conclusions but fat’s cross modal properties are the key to answering the question about why foods containing fat taste so good. Sarah Zhang explains, “Taste and smell get all the glory when we talk about food, but give some credit to your other senses, too. Fat has the ability to create unique textures — crispy or creamy — that appeal to our many senses.”[7] She continues:

“Let’s start with crispiness. If you’ve ever had to settle for Baked Lay’s instead of original Lay’s, then you know what a difference fat makes. When food is dropped into a vat of frying oil — which is far hotter than water’s boiling point of 212 degrees F — rapidly expanding steam creates crispy bubbles that give chips and fried chicken skin their satisfying crunch. It’s pleasing to bite down into and, interestingly, it’s pleasing to listen, too. According to this bit of IgNobel-prize winning research, participants biting into Pringles rated the potato snacks as fresher when they simultaneously heard a crunch sound through headphones. When it comes to cheesecake, mayonnaise, chocolate, and other creamy foods, ‘mouthfeel’ is the operative word. Human tasters working for food companies report on the sensation of fat by rubbing their tongue against the roof of their mouths. Alternatively, a machine called a tribometer, sometimes made with a pig’s tongue, makes quantitative measurements of mouthfeel. In an intriguing twist, scientists have also used microphones to study what rubbing a tongue against the roof of the mouth sounds like. Coffee with cream, for example, sounds smoother than black coffee. While mouthfeel is a tactile, ‘acoustic tribology’ can help food scientists quantify exactly how fat feels. The nuttiness of almonds, the chocolate-ness of candy — these flavors all come from volatile compounds in the food. Fat affects how volatile compounds are released in our mouths and, ultimately, how the flavor gets perceived. In a study of how flavor is released in low-fat versus high-fat ice cream, food scientists found fat could have different effects depending on the flavor. Cherry, for example, becomes more intense with less fat, but vanilla is the opposite. Food also changes from when it first hits your tongue to the aftertaste, and it’s fat that helps create the familiar flavor profile. Some flavors like to stick to fat molecules, so fat prolongs the release of those flavors in our mouths. Food scientists are, of course, hard at work on solving this problem in low-fat foods.”

Zhang concludes, “Ultimately, what this science all amounts to is an explanation of why making a low-fat substitute is so hard.” Elliott reminds us that appreciating the taste of fat has historically been a benefit to humankind beyond making a meal more enjoyable. “When you think about it,” she writes, “there’s an advantage to being able to taste and enjoy the flavor of fat. For most of the history of mankind, overeating hasn’t been much of a problem, but starvation has. Fat is easily converted into energy, and fats are also among the most calorie-dense dietary options on the planet, so a predisposition for eating fat might have meant the difference between surviving a harsh winter and perishing before spring. When you’re struggling to fit into your skinny jeans after a weekend encounter with a pan of brownies this may be hard to appreciate, but survival trumps the vagaries of fashion every time.”

Does the fact that we can recognize 4, 5, or 6 basic tastes really change how we enjoy food? In practical terms, probably not. Nevertheless, knowing how tastes intermingle with other senses to create the flavors we enjoy is important because scientists and chefs want to marry the right flavor profiles to create delicious meals. Over a decade ago, Mattes explained, “Failure to account for a taste component may compromise quality.”[8] Getting the mix right for individual consumers is what Enterra Solutions® and McCormick® wanted to do when creating FlavorPrint®, an application that is now being leveraged by Vivanda, a company that spun off from McCormick last December. To learn more about Vivanda and FlavorPrint, read my article entitled “Vivanda Aims to Take FlavorPrint to New Heights.” At least now you know why your body craves fat — I mean oleogustus.