With grain prices rising as steeply as oil prices, farmers around the world are hoping to cash in while commodities are selling high. One of the world’s breadbasket countries, Brazil, is also home to the world’s greatest atmosphere scrubber and oxygen producer — its rain forests. The temptation to clear more land for farming directly conflicts with the desire to save the rain forests. It’s a conundrum that has farmers and environmentalists squaring off and the farmers appear to be winning [“Brazil’s Answer to Global Hunger,” by Joshua Schneyer, BusinessWeek, 2 June 2008 print edition]. Schneyer reports:

“Food and forest have long been at odds in Brazil’s Amazon. While environmentalists have pushed for preservation of the lush rain forest, soy farmers have sought to fell trees and grow ever more beans. Now, with global grain prices skyrocketing, the farmers may be gaining the upper hand. On May 13, Environment Minister Marina Silva resigned, saying her efforts to protect the forest were losing traction. ‘For some time I’ve had difficulties advancing environmental policies,’ she said in a resignation letter.”

In a recent post [Turning the World Upside Down], I focused on a column by Roger Cohen that pointed out how resource-rich Brazil is becoming a global economic powerhouse in a number of areas (oil, mining, and agriculture among them). Schneyer’s article looks primarily at Brazil’s agricultural sector.

“In recent years, Brazil has become the world’s pantry. It’s the top exporter of soy, sugar, orange juice, coffee, beef, and poultry, and it’s a growing producer of corn and rice. Last year it exported $58 billion in farm products, including $11 billion worth of soy. But an increasing share of that bounty comes from areas that were once rain forest or savannah, and many farmers believe that expanding production—and profits—will require clearing even more land.”

The attached image (which accompanied Schneyer’s article) demonstrates how dramatically Brazil’s soybean exports have risen. Aligned against big agriculture and economic realities, it was difficult for Environment Minister Marina Silva to argue successfully that the rain forests meant more to Brazil’s (and the world’s) future than the urgent need for food.

“Silva had earned a reputation as a staunch defender of the Amazon. A native of the region, she helped polish President Luiz Inácio Lula da Silva’s eco-friendly image by levying stiff fines on farmers and ranchers who cut too many trees. In recent years, her efforts paid off in slowing rates of deforestation, but in January new satellite images showed a sharp increase. Silva cracked the whip, placing 1,400 farms and ranches on a blacklist that barred them from getting bank financing. That drew fierce opposition from farmers who contended that they were being unfairly targeted. ‘A billion people around the world are going hungry,’ says Antonio Galvan, head of the Rural Union in Sinop, a soybean boom town on the southern edge of the rain forest. ‘Ask them if they want Brazil to stop expanding its farms.’ Among Silva’s adversaries was Blairo Maggi, governor of the western state of Mato Grosso and one of the world’s biggest soy farmers. At an April meeting of governors, Maggi displayed photos shot by his state’s environmental officials that seemed to show forest in areas that Silva had said were cut. In some cases, he contended, ‘newly cleared’ areas had been legally logged many years ago. Others, he said, had been consumed by natural fires or ravaged by insects. More than 70% of blacklisted farms were exonerated, and Lula clipped Silva’s wings, putting another official in charge of planning in the Amazon.”

The man who now has the rain forest portfolio believes the answer lies in converting ranch land to cultivation; thus, avoiding the need to clear more land and concomitantly eliminating the methane gas produced by animals that once grazed there. Schneyer continues:

“That job has fallen to Roberto Mangabeira Unger, Brazil’s strategic affairs minister and a professor on leave from Harvard Law School. On May 8 he was appointed to oversee a new initiative: expand nature reserves in the Amazon while also developing the region with highways and railroads to create economic opportunities without cutting down trees. By converting ranch land to cultivation, he says, Brazil could double farming without touching a tree. ‘We reject the idea that in order to develop we need to destroy the Amazon,’ Unger says.”

I suspect if that if he wants to return to Harvard without facing resistance from environmental protesters he will try desperately to make his plan work.

“It’ll be hard, though, to keep farmers from pushing deeper into the forest. Cost of land on the Amazon frontier can run just 15% the price of prime agricultural acreage in the developed Southeast. As oil prices have sharply boosted the cost of trucking grain 1,000-plus miles to Atlantic ports, soy producers are eyeing land that’s closer to Amazon River shipping routes. And perhaps most important, farmers often regard the forest as little more than farmland awaiting development. ‘Around here it’s nearly a natural law,’ says Nilfo Wandscheer, a small farmer in Mato Grosso. ‘Wherever a combine can go, soybeans will grow.'”

Schneyer’s article makes a good point. Not only must a country be able to grow food it must be able to get it to market. That’s why I continue to stress the importance of taking a holistic look at a country’s economy. You can’t simply focus on developing one sector and end up with the desired results. There aren’t really very many regions of the world that can be labeled as breadbaskets. The attached image shows areas that are net exporters and net importers of grain. Only North and South America, the former Soviet bloc, and Oceania are net exporters — and severe droughts in Australia have threatened to remove Oceania from that list. Brazilian farmers understand the economics of the current situation and, like oil companies, want to take advantage of favorable conditions. What they must realize, however, is that the rain forests they seem willing to destroy are also climate engines. The favorable growing conditions enjoyed by Brazilian farmers could change if the rain forests disappear. It’s a balancing act that the world is watching and conundrum that must be overcome by the Brazilians themselves. 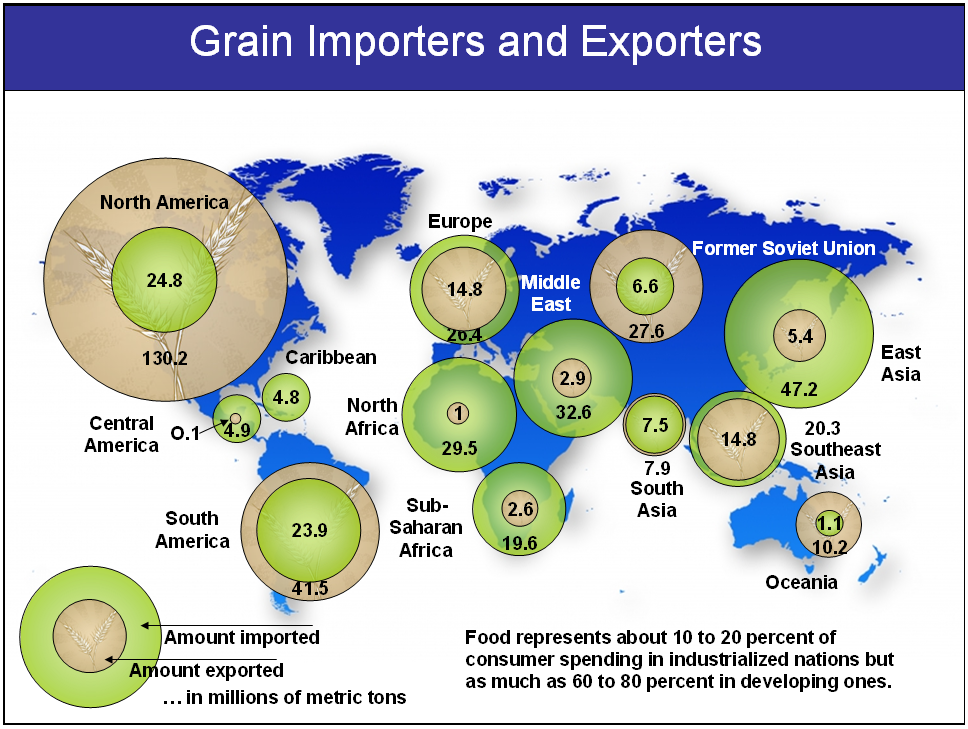 Some environmentalists believe that the best way to protect the forests are to collaborate with farmers rather than fight with them. Monte Reel, writing in the Washington Post, reported on these efforts [“Applying Capitalism to Protect Dwindling Brazilian Forestland,” 25 April 2008]. He writes:

“The world’s soaring demand for beef and grains has turned this frontier into a ripe business opportunity, even as the forest has paid the price. But what if global capitalism actually valued standing forest? Could these same farmers and ranchers — for years considered by many environmentalists as the lowest links in a chain of destruction — actually become frontline protectors of the Amazon? The idea has been so energetically embraced in many parts of Brazil that the fundamental character of the environmental movement along the Amazon’s most vulnerable edge has changed. Instead of being considered obstacles to conservation, farmers and ranchers are being wooed by many environmentalists as potential partners.”

Environmentalists are utilizing a number of tactics to apply leverage on farmers to cooperate.

“In the state of Mato Grosso, where Brazil’s agriculture industry is strongest, nonprofit organizations are teaming with banks to create loans that favor environmentally friendly farms. Industry coalitions are meeting with farmers to try to draft certification systems for ‘responsible’ soy and beef. Pilot projects are testing carbon-trading systems that offer money for ranchers with forested land. … It can be a tough sell, because current real estate values show trees as obstacles to prosperity: An acre of standing forest costs about $175 here, while the same acre cleared for plantation sells for about $1,215.”

“The going rate paid to emit one ton of carbon dioxide is between $5 and $10 in most markets, according to Greg Fishbein, director of conservation finance for the Nature Conservancy. If effective mechanisms — such as databases measuring the amount of carbon stored in a property — are established, that might be enough to make it profitable for these ranchers. According to studies, each acre of forest can store about 200 tons of carbon dioxide. Nepstad said that if the farmers of Mato Grosso could sell credits for between $3 and $5 per ton of carbon, they would have little incentive to clear more land.”

Brazilian farmers are listening to environmentalists but remain skeptical. The potential profits from carbon trading can’t beat the high prices they are receiving from bumper crops. Whether farmers are eventually secured as partners depends in large measure on the world agreeing on a carbon trading scheme that would make preserving forests a “capital” idea.