Emerging Market Nations Continue to Fare Better than Others

In a recent post entitled Brazil’s Growing Middle Class, I discussed how well Brazil is coping with the current recession. The latest estimates are that Brazil’s economy will grow a healthy 5 percent this year. Other members of the so-called BRIC countries (Brazil, Russia, India and China) are also faring well [“Economies in China, India recovering faster than those in Western nations,” by Frank Ahrens, Washington Post, 22 January 2010]. Ahrens reports:

“The giant and emerging economies of China and India appear to be lurching toward recovery faster than their more developed Western counterparts, including the United States, although the recovery is not without potential pitfalls. Beijing said Thursday that China’s fourth-quarter gross domestic product (GDP) shot up a breathtaking 10.7 percent, well surpassing expectations and marking its fastest quarter of growth since 2007. In India on Thursday, government officials said that fourth-quarter GDP is expected to decline slightly from the previous quarter but that even with the pullback, the nation’s GDP will expand by at least 6 percent, which is more than twice what is expected in the United States. That follows a forecast Wednesday from the World Bank that India’s economy will grow at a 7.5 percent clip this year and China’s at a 9 percent rate.”

The main concern for rapidly growing economies is inflation, which can undermine economic growth. Another concern in China is the bursting of a housing bubble that could rival the one that started recession in the U.S. As a result, a recent survey indicates that some investors are cooling on China [“Global investment poll finds China losing favor, U.S. gaining ground,” by Mike Dorning and Catherine Dodge, Washington Post, 24 January 2010]. Dorning and Dodge write:

“Fears of a market bubble in China have tempered enthusiasm for investments in that country even as confidence in U.S. markets has risen, according to a Bloomberg News survey. … The quarterly Bloomberg Global Poll of investors, traders and analysts in six continents was based on interviews with a random sample of 873 Bloomberg News subscribers, representing decision-makers in markets, finance and economics. The poll has a margin of error of plus or minus 3.3 percentage points. China, the world’s fastest-growing major economy, is viewed as a bubble by 62 percent of the respondents. About one-third said China offered the best investment opportunities over the coming year, almost tied for first place with the United States and Brazil, though down sharply from October, when 44 percent ranked China best. This time, nearly three of 10 investors said China posed the greatest downside risk, ranking it the second-riskiest market after the European Union.”

Despite these concerns, most analysts paint an optimistic picture for growth in emerging markets. Earlier this year, The Economist reported, “Developing countries have come out of the recession stronger than anyone had expected. This will have profound consequences for the rest of the world” [“Counting their blessings,” 2 January 2010 print issue]. The article does note that resilience to the recession was uneven among developing countries.

“Countries that were disaster zones at the start of 2009 achieved gold-rush status by the end of it. This turnaround reflects a resilient economic performance during the recession. It also reflects a stunning degree of political and social cohesion. The most important economic reason for this is that emerging markets were less affected by the rich world’s recession than seemed likely early in 2009. Big populous countries—China, India, Indonesia—did not tip into recession; they merely suffered slower growth. Brazil and the Asian tigers saw output fall but bounced back. The pattern, though, was variable. The Baltic states endured a depression; Mexico suffered from its dependence on America; eastern Europe was harder hit than Asia; poor African countries suffered more than middle-income Asian ones.”

The magazine attributes emerging market resiliency to better governance and policies, and concludes, “So far the story of global recession in emerging markets has had that rarest of themes: virtue rewarded.” Many articles about emerging markets discuss how well stock markets in those countries have fared. Of course, there have also been notes of caution about investing in volatile markets. BusinessWeek assured its readers, however, that there were good investments in so-called emerging market blue chip companies [“Emerging Market Blue Chips,” by Ben Steverman, 28 December 2009 print issue]. Steverman writes:

“Seek profit from strong economies in emerging markets, where demographics and government policies are driving impressive growth. That’s advice barely dented by the recession and financial crisis. But this wisdom comes with caveats: These markets are particularly subject to currency swings, overheating, and unexpected shocks. … No one can predict with any certainty how these stocks will perform in investors’ portfolios, either. But with economic growth around the world outpacing that of the U.S., it may be well worth finding out.”

The BRIC countries remain the focus of attention for most analysts since they will soon contribute to over half the world’s growth. But before turning my attention to them, it might surprise you to know that some analysts see countries like Pakistan as future economic stars as well [“Emerging Markets: Brazil, China—and Pakistan?” by Frederik Balfour, BusinessWeek, 28 December 2009 print issue]. Balfour’s article is based on an interview with Mark Mobius, “a legend among emerging-market investors. For more than 30 years, the 73-year-old fund manager, who oversees $33 billion spread across 35 Franklin Templeton funds, has scouted for investment opportunities in unlikely places.” When asked what was driving the emerging market rally, Mobius responded:

“Fundamentals. If you look at any time period—10 years, 3 years, 1 year—emerging markets have outperformed U.S. and global markets. Their economies are growing faster, four times faster. And during the 1997-1998 Asian crisis [policymakers in] emerging markets realized they needed strong balance sheets at the national and company level and had to build up foreign reserves, which they’ve done. They were building up reserves, keeping their currencies low, and reducing debt. Their debt-to-gross-domestic-product levels are way below developed markets, and when you look at the foreign exchange picture, it’s even more impressive. Russia has $400 billion in reserves; China, $2 trillion. So where do you want to put your money? Obviously, emerging markets are the place.”

When Mobius was asked what markets he was keen on, he responded with the obvious, “Brazil and China.” But he also said that he has invested in India and Pakistan and is looking at countries like Libya, Algeria for potential investment opportunities down the road. Mobius indicates that what he looks for are companies that are growing. Growth is what keeps everyone looking at emerging markets. With most markets in the developed world already saturated, opportunities in the developing world loom large. As the attached graphic from the Financial Times demonstrates, BRIC countries are growing rapidly but their populations remain relatively poor and have yet to become heavy consumers. 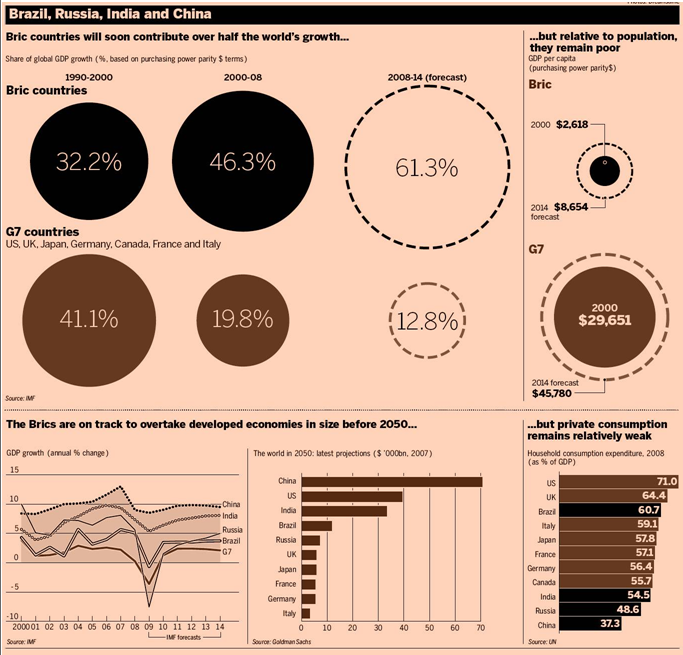 The Financial Times reports that most foreign direct investment in emerging market countries by multinational corporations has come in the form of mergers and acquisitions [“We cannot afford to spurn the emerging investors,” by Matthew Slaughter, 4 January 2010]. Slaughter, an associate dean and professor of management at the Tuck School of Business at Dartmouth, reports:

“M&A activity, not greenfield investment, is by far the predominant method by which multinationals undertake FDI. In the past decade, M&A transactions have accounted for about 75 per cent of global FDI inflows. The share is even higher in many advanced economies. The benefits of FDI via M&A can include quick presence in new markets, immediate cost-reducing synergies and ready access to technologies and managerial talent.”

That fact underscores why I keep insisting that fostering entrepreneurial ventures is in the best interest of countries. If most FDI comes via M&A activity, there must be something to acquire or there will be little to no activity. Slaughter points out that many political leaders are wary about having domestic companies acquired by foreign investors, even if they are from other emerging market countries. He cautions:

BRIC countries have been fortunate recipients of FDI. Most analysts, however, believe that the economic future of these countries relies on their becoming less reliant on exports and more reliant on domestic consumption. Signs that consumption is starting to increase can be found in many parts of China [“Shopper power rises in ‘Chicago’ hinterland,” by Geoff Dyer, Financial Times, 19 January 2010]. But Dyer asserts that although there is evidence that “that Chinese consumers are finding their feet” there is concern that they are not finding them “quickly enough.” Chinese politicians are still encouraging their constituents to buy more and save less.

Clearly, if the BRIC countries continue their meteoric rise, they will change the global economic landscape. According to Alan Beattie, however, that historic moment has not yet arrived [“Changing faces of power: stars shine bright but fail to transform the world,” Financial Times, 19 January 2010]. Beattie reports:

“The Brics already have a bigger share of world trade than the US. China, probably the world’s biggest goods exporter last year, has been supplemented by India’s software and back-office exports, Russia’s oil and gas and the domination of a number of agricultural commodity markets by Brazil’s super-competitive farmers. … So as the world emerges from recession, is this a transformational moment when the centre of gravity in the global economy and its governance decisively shifts? Is this a pivot point such as the second world war, where the confident, innovative US muscled aside the weakened, debtladen economies of Europe and remade the global financial architecture? And, most immediately, are Bric consumers currently up to the task of rebalancing the world economy by supplanting their acquisitive American counterparts? The most likely answer is: not yet.”

Why not? Part of the answer is that BRIC countries have little in common aside from exceptional economic growth. As Beattie puts it:

“Not only are the Brics such a disparate group that almost any generalization is problematic, but China, the overwhelmingly dominant member of the quartet, still seems wedded to an economic model dependent on demand elsewhere. … Like a boy band or a street gang, the Brics might almost have been chosen for their disparate abilities rather than their similarities. China’s size and openness to trade give it as much economic clout as the rest put together. … India, similar in population but poorer and economically more insular, is chiefly notable to investors and trading partners for its software and business services. Brazil, despite a sprinkling of successful manufacturers, remains one of the world’s most efficient agro-exporters; Russia, after feebler attempts to diversify, essentially just sells oil and gas. The story of their rapid progress is familiar but still dramatic. A decade ago, only one had an investment grade credit rating; now all do. … A decade of rapid growth is not enough for the Brics to seize the baton of global economic leadership from the US and western Europe. The grouping, or some of them, may have astonished the world with their progress over the past 10 years. But it will require a qualitative improvement as well as more growth to consolidate that shift of power.”

It’s clear from the above discussion that the global economic terrain is changing and that those traversing it will encounter hills, valleys, and detours along the way. Most analysts, however, are betting on the fact that emerging market countries will make the journey successfully.