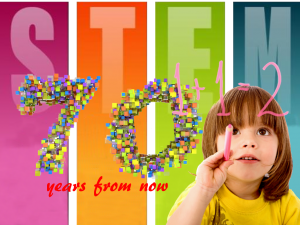 Education must Prepare Students for Jobs that Don’t Exist

One of the primary purposes of education is to prepare students to succeed in life. Success is partially measured by one’s ability to make a living. Here’s the rub — Ira Wolfe (@HireAuthority) reports that a study by the U.S. Department of Labor concludes, “65 percent of today’s schoolchildren will eventually be employed in jobs that have yet to be created.”[1] How are educators supposed to tailor their labors to best equip students for success when they really don’t know what they are preparing them do? What started me thinking about this subject was an article by Andrew Hill (@andrewtghill) that addressed the question, “Can business schools prepare students for a 70-year career?”[2] His curiosity was piqued at the 2015 World Economic Forum, when a “management professor who was instructing students in their early 20s — some of whom might work into their 90s — was heard lamenting ‘what can I teach them that will still be relevant in 2085?'” All educators should be asking themselves that question or a similar one. Cathy Davidson (@CathyNDavidson), a self-described author, innovator, higher ed gadfly, believes trying to predict what the future will look like is a non-starter. She states, “Let’s not even try to imagine the future. Everywhere around us are new kinds of employment that didn’t exist a decade ago. In fact, if you look back a decade to what people predicted we’d be doing now, almost everyone was wrong.”[3]

Hill makes a similar point. “Go back 70 years to appreciate the scale of the challenge,” he writes. “Only in 1947 did the word ‘entrepreneur’ appear in a Harvard Business School course description and even then it was years before it took root.” Seventy years ago the world was trying to raise itself from the ashes of the Second World War. The construction industry was a big employer and the average cost of new house was between $6,000 and $12,000. Workers could expect to make around $3,000 a year. Bugsy Siegel opened the Flamingo hotel on what would become the Las Vegas Strip. Some of the new consumer products introduced in 1946 were the electric blanket, the bikini, and Tupperware. In the technology arena, the ENIAC (Electronic Numerical Integrator and Computer), was revealed at the University of Pennsylvania. Who could have imagined the impact the computer field would have on the workforce 70 years ago? The point is, Davidson is correct when she insists we shouldn’t worry about what the future will look like. We should be more concerned about teaching students how to think critically, solve problems, and cope with change. Hill agrees that coping with change is one skill all workers will need. He writes, “What are the attributes that an aspiring twentysomething manager might require to thrive over her or his long career? Is it even possible to imagine such skills packaged into a neat curriculum? The most obvious is perhaps the least obviously teachable: adaptability.”

Adaptability may be hard to teach, but I believe it naturally flows from critical thinking and problem-solving skills. How are they learned? A good place to start is with a solid background in science, technology, engineering, and math (STEM). Matthew Randazzo (@MjRandazzo), Chief Executive Officer of the National Math and Science Initiative, believes STEM education needs to start early. He writes, “By beginning STEM learning in younger grades, we help children develop systems thinking and problem solving, which are exactly the skills needed for their future success. … Our potential for solving society’s greatest challenges is tremendous. I, for one, look to our youngest generation with hope. It’s on us to nurture their passion and talents so they grow up to advance and apply STEM knowledge in ways beyond our imagination.” Katherine Prince (@katprince), a learning specialist at KnowledgeWorks, concludes, “We need to redefine readiness for an uncertain future of work in which people’s desire for meaningful and authentic contribution will sit alongside and shape new platforms of exchange and value creation and a complex economic landscape. Let’s make sure education is ready.”[5]

One of the best ways to teach STEM and help students learn to be adaptable problem solvers is by engaging them in project-based programs. That’s why I, along with a few colleagues, founded The Project for STEM Competitiveness — to help get a project-based, problem-solving approach into schools near where we live. Tom Vander Ark (@tvanderark), CEO of Getting Smart, believes that project-based education will also help students succeed because he believes the future will be characterized by a workforce of freelancers, who move from project to project as their interests change. He predicts, “Four of 10 young people in high school will end up freelancing, another four will manage projects inside organizations — either way, it’s a project-based world.”[6] Hill agrees that project-based learning is important. “Collaboration,” he explains, “will be a critical skill for generations that expect to work beyond their 90th year.”

Vince M. Bertram (@vincebertram), President and CEO of Project Lead The Way, agrees that STEM skills are applicable to scores of career paths generally unrelated to STEM subjects. He writes, “Franz Kafka once observed: ‘Better to have, and not need, than to need, and not have.’ In today’s high-tech economy and workforce, Kafka’s statement could well be said of a STEM education. Even occupations not ordinarily thought of as requiring a background in science, technology, engineering and math — and the kind of problem-solving, critical-thinking and teamwork-oriented skills inherent in it — are increasingly in need of them.”[7] He concludes, “As students prepare for their futures, it is wise and responsible to equip themselves with strong STEM knowledge and skills.” One way to expose students to and excite them about STEM subjects is introducing them to people who work in STEM fields. Hill notes, “An educational or career experience that does not expose younger workers to older colleagues, and vice versa, will handicap both groups.” He concludes, “While it is easy to underestimate the inertia of established corporate structures, only a few managers will find their careers mapped out … through one company. Managers will need to gain experience of change, and how to work beyond the traditional corporation, in start-ups, social enterprises, non-governmental organizations and government.” We may not know what jobs our children will fill, but, equipped with the right skills, those jobs should be exciting and satisfying.