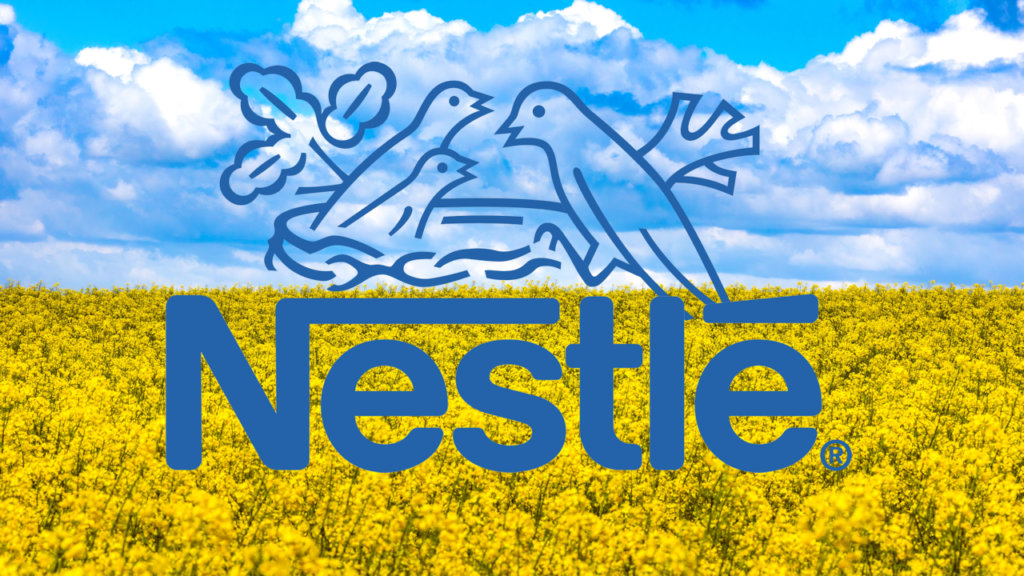 Nestlé, the largest publicly held food company in the world, recently announced it was investing “40 million Swiss francs ($42.88 million) to launch a new production facility in western Ukraine.”[1] Olena Harmash, a Strategic Communication Adviser with CGIAR, notes, “Nestlé is one of very few international companies to announce new investments in Ukraine since Russia invaded the country in February 2022.”[2] Nestlé executives have learned that carrying on operations as a food company during conflict can be tricky. They have been criticized for continuing to do limited business in Russia in the aftermath of its unprovoked invasion of Ukraine. Utmost in the minds of Nestlé executives has been their stated purpose of “ensuring the basic right to food” for all people. Before continuing, I’m proud to say that Nestlé is an Enterra Solutions® client.

During the Ukraine conflict, Russia’s President Vladimir Putin has weaponized the food supply chain. Nestlé executives believe such actions are abhorrent. On the other hand, they believe denying Russian citizens access to essential foodstuffs as a result of decisions made by political leaders is also wrong. Journalist Michael Blanding bluntly lays out the conundrum Nestlé executives faced. He writes, “Nestlé had to choose whether to leave Russia in protest and potentially deprive civilians of essential goods, such as baby formula, or stay and face global outrage.”[3] Having taken a principled stand to provide essential foodstuffs, Nestlé executives have received criticism — even from Ukraine’s President Volodymyr Zelensky. In response to Zelensky’s remarks, a Nestlé spokesperson stated, “We have significantly scaled back our activities in Russia: we have stopped all imports and exports from Russia, except for essential products. We no longer make investments or advertise our products. We do not make a profit from our remaining activities.”[4] The Nestlé website adds, “Our remaining activities [in Russia] are focused on bringing essential food to the local people.”[5] The website goes on to list company actions with regards to Russia. Those actions include:

• Suspending production of the large majority of SKUs of renowned Nestlé brands to focus on providing essential foods, such as infant food and medical nutrition;

• Halting non-essential imports and exports into and out of Russia;

• Suspending capital investment in the country;

• Fully complying with all applicable international sanctions on Russia; and

• Donating any profits made to humanitarian causes.

Some people, including some Nestlé employees, didn’t believe these actions went far enough. As a result, Reuters reports, “An unspecified number of Ukraine employees quit and others [were] bullied on social media for remaining with a company doing business with Russia.”[6] In their closing comment about their operations in Russia, Nestlé executives make it clear where their sympathies lie. They wrote, “We stand with the people of Ukraine and our 5,500 employees there.” Blanding reports, “When it comes to decisions on such moral issues, consumers play an important role in the eventual impact on the company. In Nestlé’s case, soon after the company announced its strategy, calls for a boycott faded, signaling that stakeholders had accepted its compromise.”

Journalists Peter Vanham and David Meyer write, “Some companies like risks. Others don’t. And then there’s Nestlé.”[6] In response to Nestlé’s latest announcement, they ask, “What drove the 156-year-old company to invest in Ukraine: bravery, or just good business sense?” Nestlé chairman Paul Bulcke told Vanham, “We want to show the Ukrainian people that they can count on us. We want them to know we are consistent in our beliefs and dependable in our commitment to them.” The Nestlé website notes, “Since the outbreak of the war in Ukraine, Nestlé’s focus has been on ensuring the safety and security of our employees and their families, as well as providing humanitarian assistance and support to help the people of Ukraine and refugees in neighboring countries.”[7] The website adds, “By participating in #StandUpForUkraine, matching International Federation of Red Cross and Red Crescent Societies (IFRC) monetary donations, and providing product donations from our local factories, we have committed over 15 million Swiss francs ($16.2 million) in contributions to the people of Ukraine. We are in close daily contact with our 5,500 Nestlé employees in Ukraine and their families and doing all that we can to ensure their safety.” Some of the steps Nestlé has taken include:

• Maintaining salaries for the foreseeable future.

• Manning an employee hotline providing (legal and immigration) advice on how to relocate, cross the border, seek medical and psychological help, get food assistance or find a colleague.

• Supporting hubs in neighboring countries, such as Poland, to welcome employees and their families who have fled Ukraine.

• Collecting 300,000 Swiss francs ($324,000) through the donation initiative UkraiNEST Foundation to restore homes of colleagues in Ukraine.

• Installing 24h/7d Survival Hubs in Nestlé offices for colleagues and their families.

And, as noted above, the company is building a new facility in Ukraine. The website notes, “This investment is aimed at increasing the production of noodles in Ukraine. This newly announced production site in Volyn, together with the existing Torchyn factory (Lutsk), will become Nestlé’s European Regional Hub for Food and Culinary products. The Hub will employ 1,500 people and supply Ukraine and other European markets.”

Nien-Hê Hsieh, the Kim B. Clark Professor of Business Administration at the Harvard Business School, believes Nestlé’s actions are helping the company build trust with its consumers. Blanding, writing about a case study completed by Hsieh, explains, “Trust can be broken down into two types, [Hsieh] notes. ‘One is just the idea that you are trusted because you are reliable. You do what you say you will do.’ The other, more important, type is called ‘trust as goodwill,’ Hsieh says. ‘You are trusted because customers and other members of society believe that you are not just advancing your own interests — but that you have their interests in mind as well.'”

It took courage for Nestlé executives to take the principled stand they did. Hsieh insists companies faced with these kinds of fraught moral situations should weigh three factors when deciding how to proceed. Those factors are:

• Connection. “There are some things that you just can’t be associated with no matter what.”

• Complicity. “That is, how much are you aiding and abetting morally reprehensible acts?”

• Contribution. “Companies must consider what they are doing to improve or ameliorate the situation.
When it comes to decisions on such moral issues, consumers play an important role in the eventual impact on the company.”

As Vanham and Meyer conclude, Nestlé’s actions provided a “corporate lesson in ‘living up to your beliefs’.”