Home » Best Practices » Does the Circular Economy have Legs? 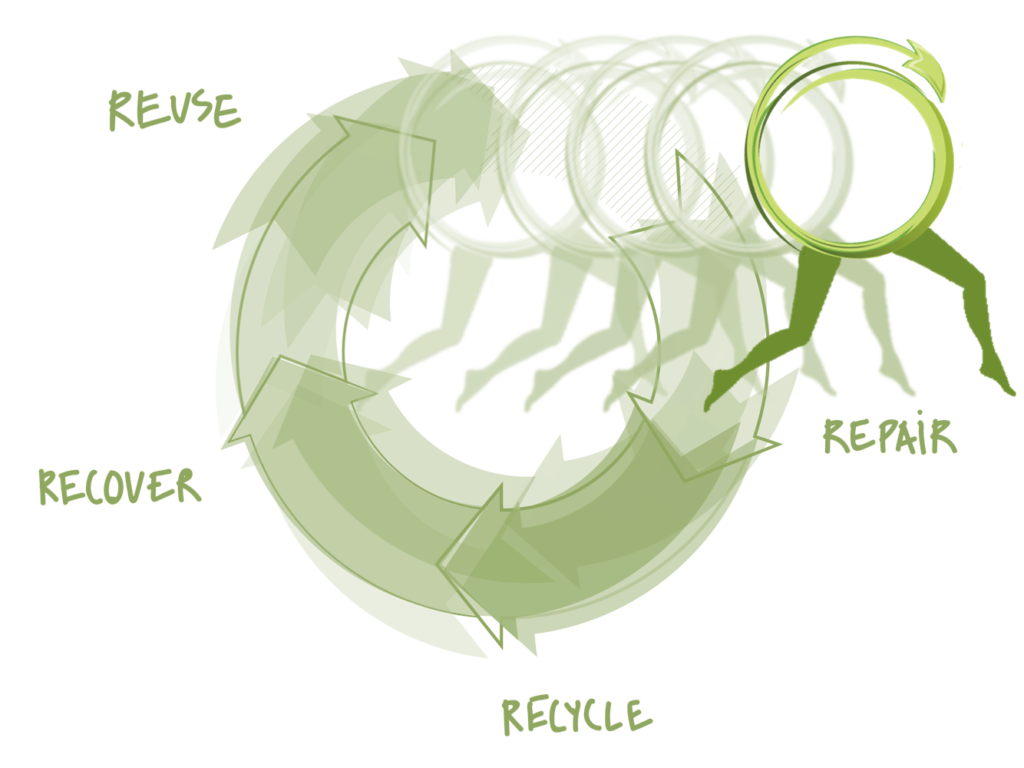 Does the Circular Economy have Legs?

“Mainstream business leaders are engaging in circular thinking and the evidence is everywhere, from their blogs to the commitments made at major global forums,” writes Susan Graff (@smgraff13), Principal and Vice President at Resource Recycling Systems.[1] To understand what Graff means by the term “circular thinking,” you have to understand the concept behind it — the circular economy. According to the Ellen MacArthur Foundation, a leading proponent of the circular economy, “The circular economy refers to an industrial economy that is restorative by intention; aims to rely on renewable energy; minimises, tracks, and hopefully eliminates the use of toxic chemicals; and eradicates waste through careful design.” The Foundation gained major support for the circular economy concept in 2014 when it teamed with McKinsey & Company and the World Economic Forum to publish a report entitled “Towards the Circular Economy: Accelerating the scale-up across global supply chains.” The report stated:

“Linear consumption is reaching its limits. A circular economy has benefits that are operational as well as strategic, on both a micro- and macroeconomic level. This is a trillion-dollar opportunity, with huge potential for innovation, job creation and economic growth. The last 150 years of industrial evolution have been dominated by a one-way or linear model of production and consumption in which goods are manufactured from raw materials, sold, used and then discarded or incinerated as waste. In the face of sharp volatility increases across the global economy and proliferating signs of resource depletion, the call for a new economic model is getting louder.”

Ella Jasmin, Research Manager at the Ellen MacArthur Foundation told Lauren Helper, “The circular economy is ‘a model that decouples economic growth from resource constraints’ by reducing reliance on virgin materials. Instead, the goal is to keep materials functioning at their highest utility at all time, preventing would-be waste from reaching landfills.”[2] Graff adds, “Practically speaking, the goals of the circular economy are to shift the take-make-waste linear industrial system in big and meaningful ways to create closed loop systems. The result is a net positive or restorative impact measurable at the scale of an economy, creating shared value with environmental, economic and social benefits.” The big question is whether the circular economy has legs? Is it a passing fad or real movement? The recent collapse of oil prices has delivered a significant blow to recycling efforts and the circular economy relies heavily on recycling.

There are good reasons to take the long view when it comes to the circular economy and, in the long term, the circular economy makes sense for a number of reasons. First, despite lower oil prices, signs of resource depletion are evident and recycling will become a necessity in the not too distant future. “Since the industrial revolution,” observe Terence Tse (@Terencecmtse), Mark Esposito (@Exp_Mark), and Khaled Soufani, “we have been able to get away with relying on natural resources to raise our standard of living. But as these resources become scarcer and more expensive, we need to find new ways to create a more sustainable environment.”[3] Second, businesses hate waste. Waste cuts into profits. There are other reasons (such as societal benefits) for supporting the circular economy concept, but business economics will determine whether it has legs. The following video provides a brief overview of the challenge.

Graff notes, “[The] Circular economy is not a simple cut-and-paste, one-size-fits-all fad. It goes beyond the walls of a single corporation and emphasizes the full interconnected system. It requires an understanding and a dependency on those within the system to collaborate — success of the circular economy means success for its players.” The fact that the success of the circular economy relies on the creation of an overarching ecosystem unfortunately reduces the chances of its success unless businesses learn to collaborate better than they have in the past. Helper reports, “Despite these macroeconomic pressures, concrete examples of the circular economy in action remain niche in the grand scheme of the global economy. Still, the dual allure of cutting material costs and shrinking waste streams has fueled financial projections of up to $1 trillion a year — if circular logic can go mainstream.” That’s a big “if.” For companies desiring to tap into that trillion dollar pot of gold, there are some practical things they can do to get started. Tse, Esposito, and Soufani suggest three ways businesses can start: 1) recycle more and better, 2) rent goods, and 3) lengthen the longevity of products. And Jamie Evans, a consultant at Accenture, has created an interactive Circular Economy Toolkit for businesses that is worth checking out.

Evans notes, “Recycling is the process of using materials at the end of their life for new products. The process avoids waste going to landfill, reduces energy usage and the impact on the environment.” Not all recycling is alike. Tse, Esposito, and Soufani recommend that the increased adoption of closed loop recycling. They explain, “There are two main forms of recycling: closed and open loop. They’re not equal. Closed loop involves reusing materials such as glass, steel, and aluminium that can be recycled continually. Open loop, or ‘downcycling,’ takes into account the fact that materials (e.g., paper) downgrade to lower quality with each recycling, so this involves either only recycling materials that won’t deteriorate over time or extending the lifespan of materials before recycling them.” Evans discusses three types of “-cycling”: recycling (reusing a material for the same purpose over and over); downcycling (using degraded materials for lower quality products); and upcycling (increasing the value of a product through using it for a different purpose).

“In this type of ‘servitization,’ or selling the use of goods instead of the goods themselves,” explain Tse, Esposito, and Soufani, “companies effectively retain the ownership of the goods throughout their life cycle, as customers must return the product to the sellers.” This business model will require the biggest change in business culture and consumer mindset, which is why it remains the most controversial aspect of the circular economy. An Ernst & Young survey conducted in 2012, concluded that up and coming generations of consumers might be open to this concept. It concludes, “[We are in the] midst of a pervasive shift in consumer behavior. A new generation of customers seems prepared to prefer access over ownership. This can be seen in the increase of shared cars, machinery, and even articles of daily use.”[4]

One area that won’t suffer from consumer blowback is improving product quality. Evans notes, “Maintenance is a critical activity carried out in the use phase of the product life cycle to prolong system availability.” Repairing a product is generally cheaper than buying a new one — that’s good for the consumer. It’s also good for the manufacturer. Evans explains, “After-sales services and spare parts may generate more than three times the turnover of the original purchase.” Tse, Esposito, and Soufani, argue that extending the life-cycle of product by refurbishing it is also a viable strategy. “Instead of just melting unwanted products down, many physical goods can undergo ‘remanufacturing’ to extend their longevity. This means that they can be re-utilized for secondary or emerging markets with a less sophisticated infrastructure.”

The circular economy is, in theory, a great concept for businesses, consumers, and the planet. But as Graff notes, “The circular economy requires participation, collaboration and shared understanding throughout the value chain.” She argues, however, “Not only is [the circular economy] not a fad, it is essential for sustainability and zero waste goal achievement.” Tse, Esposito, and Soufani add, “This won’t happen without innovative solutions from businesses and consumers. The sooner we build a circular economy, the better it will be for all of us.”