Home » Globalization » Does Geography Matter in the Digital Age? 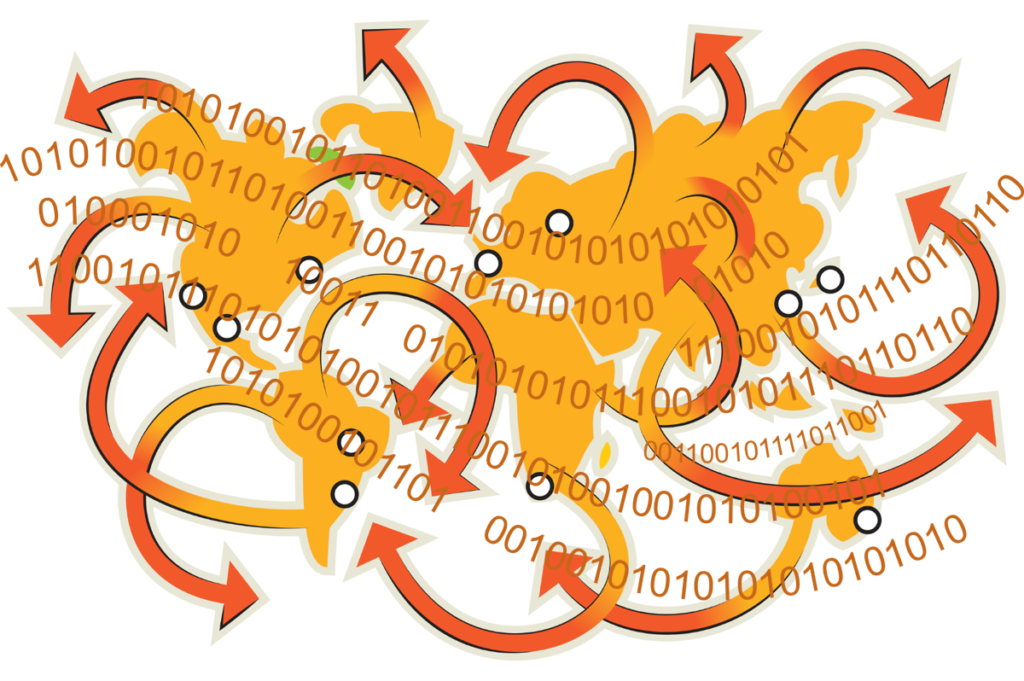 Nearly a quarter century ago, Professor Stanley D. Brunn described the Internet as “the new world” and wondered if it would offer a new geography to humankind. He wrote, “The earliest humans were interested in a variety of geographical questions, including where were food, water, and friends; how long did it take to move between place A and B, and how could they illustrate familiar surroundings?”[1] As humans became more organized many of these questions involved supply chains (i.e., the movement of resources from one area in order to exchange them for different resources from other areas). Supply chains have always been tied to geography. Brunn went on to note, “We have witnessed advances in our thinking from localized worlds to regional worlds, from flat worlds to oceanic and transoceanic worlds.” Today, we have virtual worlds in which geography and distance don’t seem to matter. Academics from the San Diego State University note, “With the rise of the Internet and the new era of globalization, some have argued that the world is flat — geography is dead.”[2] However, SDSU professor Ming-Hsiang Tsou states, “We disagree with that.” So do most supply chain professionals. Yet the idea persists.

Sean Silverthorne (@SeanSilverthorn), Editor-in-Chief of Harvard Business School Working Knowledge, writes, “Location has always been a vital resource in business. ‘Location, location, location,’ as they say in real estate. But then along came the internet in the 1980s, and suddenly distance-related business costs collapsed for transactions, communications, transportation, and search. The web was the ‘death of distance,’ a concept popularized in 1997 by Frances Cairncross’s book of the same title.”[3] Like professors at SDSU, Silverthorne notes that several Harvard Business School professors also debunk the idea that distance is dead. In fact, distance is very much alive and still creating challenges for supply chains.

One of those Harvard academics is Shane Greenstein, the Martin Marshall Professor of Business Administration. He told Silverthorne that, even though the internet didn’t eliminate geography, it has had an impact. He noted, “Communication costs are lower on the internet because it is inexpensive to communicate with others, whether they are in the same building or across the world. Transportation costs became lower in two ways. First, for goods that can be digitized, distribution is nearly free. Second, online interactions reduce the need for travel. The reduction in search costs on the internet follows directly from the other lower costs. If communication costs and transportation costs fall, then it is easier to compare potential choices before making a selection.” Greenstein also asserts, “The internet completely altered the efficiency of supply chains.” What it didn’t alter, however, was how long it takes to get a physical product from point A to point B.

Despite advances in information technology, countries (and those living in them) are what Tim Marshall (@Itwitius), formerly with Britain’s Sky News, calls “prisoners of geography.” In a book by that name, Marshall argues that all sorts of decisions, but especially political decisions, are influenced by geography as decision-makers confront the reality of the Earth’s mountains, rivers, valleys, and oceans. Journalist Daniel Dombey (@danieldombey) writes, “Tim Marshall’s book is a reminder of the salience of geography in international affairs.”[4] He adds, “At the heart of his work is a thesis as dispiriting as it is radical: that the present dysfunctional state of the world is where we were always going to end up.” Marshall’s arguments are fairly straight forward: Locations blessed with the right climate, resources, and access to global markets will always do better than countries without such gifts. The question today is how will climate change alter those variables. Marshall explains his ideas in the following video.

In the video, Marshall touches on how geography and distance affects trade and resources. As globalization became a major feature of the world economy, geography and distance began playing a more (not less) important role in supply chain operations. Over a dozen years ago, Deborah Cowen, a professor with the Department of Geography at the University of Toronto, noted, “Since World War II, logistics experts have conceptualized [the] economy anew by spatializing cost–benefit analysis and applying systems analysis to distribution networks. The ‘revolution in logistics’ has changed how space is conceived and represented, and transformed the practical management of supply chains.”[5] The cost-benefit analysis resulted in many companies moving manufacturing processes to Asia, primarily because labor was cheap. Nevertheless, the globalization of business placed greater emphasis on lead times, transportation costs, and so forth. Cowen noted that supply lines stretching halfway around the world resulted in a “blurring” of what was “inside” and “outside” of national space, as well as businesses having to deal with myriad policy, regulation, citizenship and labor rights issues.

A decade ago, Peter Draper (@PeterDraper5), the Executive Director of the Institute for International Trade at Adelaide University, observed, “Fundamental changes to global value chains are afoot. In the next decade the underlying cost structures driving their location could change dramatically.”[6] He identified five drivers affecting the geography of supply chains. They were:

Draper concluded, “Therefore the geography of value chain location is likely to shift within the next decade, with major implications that will play out differently in different contexts: developed countries are concerned about retaining jobs; developing countries are either looking to retain their existing value chain niches or others are looking to plug into them.” Not much has changed about that assessment over the past decade, with the possible exception that climate change has become a bigger issue.

Geography and distance will continue to affect decisions about supply chains. Many analysts predict a bifurcated world with China reigning over Asia and competing economically with the West (i.e., America and Europe) in other areas of the world. Others see the global ties between China and the West as too strong to be broken. Although it’s true that the ties between China and the West are currently strong, it would be foolish to make an argument similar to that made by Sir Norman Angell prior to the First World War. Angell is widely remembered for writing a pamphlet in 1909 (entitled Europe’s Optical Illusion), which was published as book in 1910 entitled The Great Illusion. In that book, he argued that the economies of European countries were so intertwined that war between them would be entirely futile. He was wrong. That means today’s supply chain professionals must be attuned to geopolitical risks that could disrupt operations as well as being attuned to the challenges of geography and environmental risks associated with climate change.