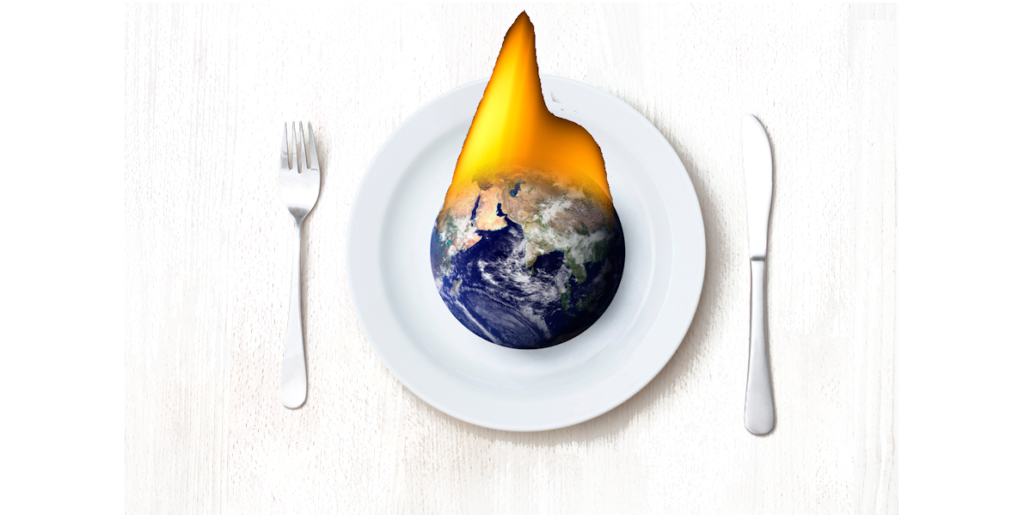 “Conflict breeds hunger,” writes Marie Haga, Associate Vice-President of External Relations and Governance at the UN’s International Fund for Agricultural Development. “It can displace farmers and destroy agricultural assets and food stocks. Or it can disrupt markets, driving up prices and damaging livelihoods. In this vicious circle, conflict and lack of food break down the very fabric of society, and all too often lead to violence.”[1] Recently, it seems like the world is filled with violence and conflict. Considering that the world’s population is increasing by one billion people every 11 to 12 years, losing any source of food is big problem. I was recently struck by arguments presented by Arif Husain (@WFPChiefEcon), Chief Economist at the U.N. World Food Program. Like Haga, he argues that conflict increases food insecurity and puts at greatest risk the world’s poor. He writes, “The war in Ukraine — a major ‘breadbasket’ for the world — is deepening these challenges on an unprecedented scale. In the immediate, swift and bold action is required by both wealthy and low-income nations to avert further humanitarian and economic catastrophe.”[2]

People living in developed countries miles from any conflict might convince themselves that the violence won’t affect their lives. They’re mistaken. As I noted in a previous article, most conflicts have global consequences.[3] This is especially true about the war in Ukraine. Journalist Holly Ellyatt (@HollyEllyatt) explains, “The economic fallout from the conflict is becoming clearer and the outlook does not look good. Against an already turbulent backdrop of global inflationary pressures amid rising food and energy prices and disrupted supply chains following the coronavirus pandemic, the war between Russia and Ukraine is exacerbating supply and demand tensions, damaging consumer sentiment, and is threatening global economic growth.”[4] Husain agrees. He writes, “Looking forward, the international community should learn two key lessons from the Ukraine crisis. First, we live in an increasingly interconnected world and would be remiss if we ignored food insecurity and conflict challenges in any part of the globe as someone else’s problem. Secondly, it is critical for the international community to go beyond immediate stopgap measures; not only addressing the root causes of these challenges but also reexamining the agricultural and energy policies that underpin our global economy.”

I sometimes wonder if the ubiquity of social media has deadened our senses to humanitarian crises around the world. We are constantly bombarded with images of people suffering from conflict, persecution, and starvation. Often these people are displaced, creating refugee challenges that few countries are willing to address. Instead of reaching out to help these refugees, many countries deliberately turn their backs. Xenophobia is alive and well. As I noted in another article, one shining counter-example is the people of Poland.[5] They have gone beyond the mark to help Ukrainians fleeing from Russian atrocities being committed in their country. I cannot help but think of John Donne’s famous line: “Each man’s death diminishes me, for I am involved in mankind. Therefore, send not to know for whom the bell tolls, it tolls for thee.”

Husain observes, “Shocks like the war in Ukraine put into stark relief that food insecurity challenges are not always related to availability issues. Rather, it’s a question of accessibility and affordability. As the war drags on, already record levels of acute food insecurity are expected to sharply rise. In the 81 countries where the U.N. World Food Program (WFP) works, acute hunger is projected to increase by an additional 47 million people, from 276 million to 323 million — this is a staggering 17% jump, with the steepest rises in sub-Saharan Africa.”

The first thing that must be acknowledged is that when a nefarious leader, like Russia’s Vladimir Putin or Syria’s Bashar al-Assad, are hellbent on committing atrocities, little can be done to stop them. The consequences are always disastrous. Al-Assad deliberately used starvation as a military tactic in Syria’s on-going civil war. As a result, on 24 May 2018, “the United Nations (UN) Security Council unanimously passed a resolution condemning the use of food insecurity and starvation as a tactic of war. It was the first time the Council had ever addressed the issue, acknowledging a threat to the lives of tens of millions of people.”[6] The Resolution is aimed at countries engaged in international or civil wars and “implores all parties to leave food stocks, farms, markets, and other distribution mechanisms intact. It demands parties in conflict permit humanitarian aid workers unimpeded access to populations in dire need and states that ‘using starvation of civilians as a method of warfare may constitute a war crime’.” Like Al-Assad, Putin has disregarded the Resolution while pressing his relentless attacks in Ukraine.

The international community has time and again demonstrated its unwillingness to act early when a crisis raises its ugly head. Husain argues, however, that waiting is costly — both in terms of lives and dollars. He notes, “We know that conflicts cast long shadows, particular when not addressed early — every dollar invested in prevention saves between $5 and $7 dollars once conflict ensues and deepens. … The lesson is clear: don’t wait to invest resources until crises reach your own shores or borders. Doing so only means that more resources and political capital will have to be spent down the road.” He goes on to make several other recommendations. They are:

• Dispel the myth of localized conflict. Husain notes, “Our world is more interconnected than ever. [It’s] a fundamental reality of the 21st century. And while arguments in favor of drawbridges, disentanglement and domestic prioritization are attractive, they are also unrealistic. As we have seen time and time again — whether during the COVID-19 pandemic, Taliban takeover of Afghanistan, military coup in Myanmar, or war in Syria — crises that originate abroad always generate costs at home.”

• Address root causes. This is easier said than done. Experts have been offering this advice for decades, with little to show for it. Husain notes, “Addressing the root causes of our current fuel and food crisis takes time, of which we have very little.” Activities that can address root causes include encouraging diversification of agricultural imports. As Husain notes, “One of the core drivers of today’s global food crisis is market concentration. Any significant drop in supplies from even one of top grain exporter can spell disaster for reliant importers.” Another action recommended by Husain is ensuring that fertilizers are available and affordable. In a previous article, I addressed the current fertilizer crisis and it’s potential impacts.[7]

• Provide adequate humanitarian and other forms of assistance to the world’s most vulnerable. Humanitarian experts have noted that Ukraine has transitioned from breadbasket to breadlines. It’s one reason food prices are rising. Increased prices for food affect consumers and humanitarian agencies. Husain observes, “Humanitarian agencies … were already severely hamstrung due to the global pandemic. Rising food, fuel and transport prices have increased the costs of humanitarian assistance, which means agencies have fewer resources to spend on essential goods and services such as food, water, agricultural supplies, sanitation and medical care — just as they’re needed most. … The reality is that humanitarian needs are vastly outstripping available resources.”

• Foster the international food trade. “In addition to scaling up funding,” Husain writes, “donor countries should ensure that all trade in food, humanitarian supplies and vital products such as agricultural inputs, including fertilizer, are exempt from sanctions, export bans, extraordinary taxes and duties. This also means making sure that poor countries have access to financing for food, fuel and fertilizer. … Keeping trade open for food, fuel and fertilizer is crucial to containing the increase in food insecurity both within Ukraine and globally.”

• Keep trade flowing and minimize disruptions to supply chains. Great advice; however, global supply chains are already snarled and disrupted. Chinese lockdowns are only exacerbating the situation. Nevertheless, Husain writes, “To prevent further disruption, the international community should continue to strengthen the capacity of the World Trade Organization (WTO) to cushion the effects of the war on global trade.”

• Disincentivize knee-jerk policy reactions, such as export restrictions and import subsidies. Husain reports, “Since the Ukraine invasion, 23 countries have imposed export restrictions on food. The current restrictions affect about 17.3% of total calories traded globally, up from 5.6% before the war.” Caitlin Welsh (@welshce), Director of Global Food Security Program at the Center for Strategic & International Studies, writes, “To quell the impacts of the war-induced global agriculture and food security disruptions, International Food Policy Research Institute (IFPRI) experts recommend that countries continue to exempt food and fertilizer from sanctions, refrain from imposing export bans, avoid hoarding and panic buying, and suspend biofuel mandates in order to retain supplies on global markets and quell prices spikes. To blunt the impact of price hikes on the poor, IFPRI recommends that countries direct food subsidies to the most vulnerable and provide humanitarian assistance through the World Food Program (WFP). In the long term, IFPRI recommends that countries avoid imposing market-distorting subsidies, cautiously consider decisions regarding land conservation programs, and avoid the allure of calls for food self-sufficiency.”[8]

Husain concludes, “As we emerge from today’s crisis and prepare for tomorrow’s, the international community must remain focused on mitigating the underlying drivers of food insecurity.” He adds, “Ultimately, we must refashion our response to conflict and its consequences. You do not have to be a humanitarian motivated by idealism to do this or to understand why it is a vital national security interest for nations around the world. This is a matter of dollars and cents. War and its consequences — like food insecurity, supply chain disruptions or migration — are no longer localized. The global community is deeply intertwined and only becoming more so, which means a problem for one region can quickly escalate into a global crisis. Addressing the root causes of food insecurity is the only way forward if we are serious about getting ahead of the next hunger crisis.”

With all this talk about global food trade, one might conclude that large agri-business is the key to international food security. That would be a mistake. Haga notes, “Small-scale farming is key to food systems that contribute to peaceful and healthy communities. More than 2 billion people depend on the world’s 500 million small farms for their livelihoods. They have great potential to contribute more to well-functioning, sustainable food systems.” More than anything else, trying to end conflicts around the world will give farming enterprises — both large and small — the opportunity to feed the world.

Footnotes
[1] Marie Haga, “Breaking the vicious circle of hunger and conflict,” United Nations, 2021.
[2] Arif Husain, “The Ukraine War is Deepening Global Food Insecurity — What Can Be Done?” United States Institute of Peace, 16 May 2022.
[3] Stephen DeAngelis, “The Food Supply Chain and the War in Ukraine,” Enterra Insights, 25 April 2022.
[4] Holly Ellyatt, “From soaring food prices to social unrest, the fallout from the Russia-Ukraine war could be immense,” CNBC, 21 April 2022.
[5] Stephen DeAngelis, “An Observation on Corporate and Societal Resiliency and the Strength of the Human Spirit,” Enterra Insights, 11 April 2022.
[6] Staff, “Hunger and War,” National Geographic Society, 15 January 2020.
[7] Stephen DeAngelis, “The World Needs More Fertilizer — and That’s No Bulls**t,” Enterra Insights, 19 May 2022.
[8] Caitlin Welsh, “The Russia-Ukraine War and Global Food Security: A Seven-Week Assessment, and the Way Forward for Policymakers,” Center for Strategic & International Studies, 15 April 2022.