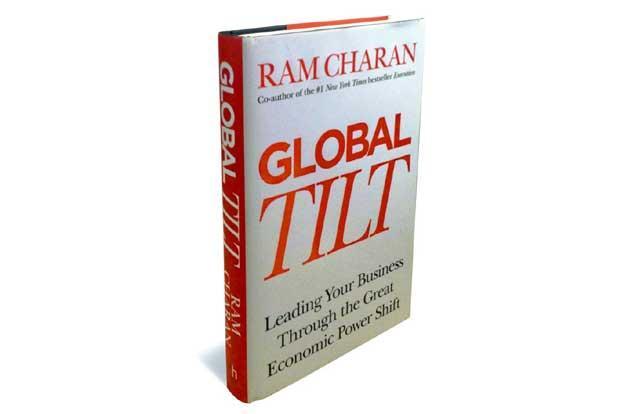 Earlier this year Ram Charan wrote, “When news broke recently that Brazilian investment firm 3G Capital was teaming with Berkshire Hathaway to buy Heinz for $28 billion, some people noted that the deal marked a resurgence in M&A activity. Maybe so, but I see it as part of a bigger, more formidable trend that has vast implications for the future of almost every business: what I call the global tilt.” [“Why the South Will Lead in the Global Tilt,” HBR Blog Network, 22 March 2013] Global Tilt is also the title of an interesting new book that Charan authored and released at the beginning of the year. Charan explains the reason for selecting this title:

“The global tilt is an irreversible shift of economic power from North to South: from the U.S., Europe, and Japan in the Northern hemisphere to China, India, Brazil, Indonesia, Malaysia and other countries mostly in the Southern hemisphere. The center of gravity for jobs, wealth, and market opportunities is moving, disrupting the world economic order as we have known it.”

I didn’t find any of Charan’s arguments particularly new; but, he did pull together in one very readable book all of the trends that are causing the global economy to tilt south and east. In his review of the book, Geoff Colvin, senior editor-at-large of Fortune magazine, writes, “You think you know all this: Global economic power is shifting from North to South. Emerging-market middle classes are surging; they’ll be increasingly urban and young. Governments worldwide are asserting stronger control over their nations’ key industries and resources. Business will never be the same. You’ve heard it before. The great virtue of Ram Charan’s new book, Global Tilt: Leading Your Business Through the Great Economic Power Shift, is that it shows you how inadequate your understanding of these trends probably is.” [“Welcome to the Great, Global Business Revolution,” 28 June 2013] Anyone whose company is wants to get in front of this inevitable tilt toward emerging markets will want to read Charan’s book.

The book is broken into two parts. The first part of the book involves a tour d’horizon of the many trends working together to change the global economic landscape. The second part of the book offers some recommendations about how to successfully navigate this new landscape. Charan’s intellect comes through clearly in his writing; but, unlike many academic or business authors, he writes in a straight forward, down-to-earth way that makes his ideas completely accessible. Charan predicts, for example, that mobile technologies will have a powerful influence on the future of emerging economies. “The most dramatic change of all,” he writes, “may be the power of digital technology to create structural changes in the composition of national economies.” He offers practical advice rather than grand theories and provides plenty of examples to support his points. To get a better idea of what is contained in the book, watch the following video of an interview with Charan.

Charan draws a fairly distinct dividing line between the North (the old global economy leaders) and the South (the future global economy leaders). That dividing line is 31st parallel. He encourages business leaders in countries below the 31st parallel to concentrate on growing their businesses there rather than looking to break into the North’s more stagnant economy. In the HBR Blog Network article, Charan explains why he believes business leaders in emerging market countries “have an edge” over their northern counterparts when it comes to winning market share. He writes:

“In some ways business leaders in the South have an edge:

“They are a product of scarcity. Many have grown up under conditions of hardship. Improvising and working on very tight margins is second nature. They are fiercely focused on operations, because they know that’s how money is made or lost. …

“They think large-scale. South-based leaders are living through huge changes in their home countries, and suddenly see opportunities they never even dreamed of right in their own backyards. An American company might think 4 percent revenue growth is acceptable; a Southern company thinks 20 percent is normal. …

“They learn fast. These leaders tap the advice of investment bankers and consultants, many from the North, to identify the best opportunities, and they use partnerships, joint ventures, licensing deals, and acquisitions — whatever it takes — to establish themselves in a market or industry and scale up quickly. …

“They move fast. These leaders are energized by the opportunities they see before them, and they are decisive.”

Charan doesn’t believe that businesses from the north can’t succeed in a tilted world; he simply stresses that they need to do their homework and learn as much about the countries in which they want to operate as they can. As he noted in the video, for example, India is not a single homogeneous market (like the United States), but contains over two dozen very different markets that must be understood. That’s what makes doing business in emerging markets difficult. Old business ideas must be unlearned and new strategies must be developed. He fears that too few companies will take the time to follow his advice. “Information is readily available,” he writes. “Time for reflection is what’s in short supply.” Colvin notes:

“We all understand this shift is big; Charan demonstrates that it’s much bigger than many of us realize and will demand far more drastic changes to the way we run our businesses than most managers have dreamed of making. While the shift affects virtually every business on earth, Global Tilt speaks mainly to managers from the North who have no conception of how deeply they must transform their business lives.”

How much time do business leaders have to adapt to this new landscape? Charan doesn’t make predictions. “The pace and timing of the global tilt may be uncertain,” he concludes, “but the direction is clear.” I believe that is a conclusion that would be hard to dispute. Charan believes that the global tilt will offer companies some of the best opportunities that have been seen in decades. Companies that fail to take advantage of those opportunities, he asserts, will likely be targets for takeover. On his website, Charan concludes, “A big part of good leadership is preparation and I encourage you to prepare yourself and your company for one of the greatest leadership opportunities in modern business history.”