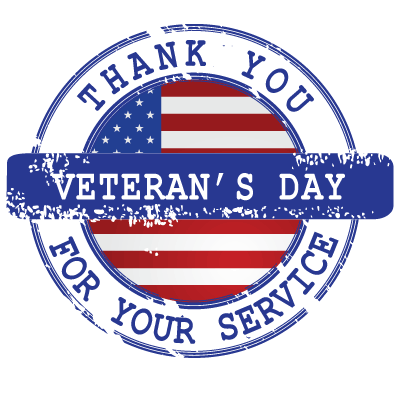 The origins of Veterans Day go back nearly a century to the end of the First World War — the so-called Great War. Although the Great War officially ended with the signing of the Treaty of Versailles on 28 June 1919, the fighting actually stopped seven months earlier on 11 November 1918, when an armistice was signed by the Allied nations and Germany. The armistice went into effect on the eleventh hour of the eleventh day of the eleventh month of that year. For that reason, 11 November 1918, is generally regarded as the end of “the war to end all wars.” A year later, President Woodrow Wilson proclaimed November 11 as the first commemoration of Armistice Day, and stated: “To us in America, the reflections of Armistice Day will be filled with solemn pride in the heroism of those who died in the country’s service and with gratitude for the victory, both because of the thing from which it has freed us and because of the opportunity it has given America to show her sympathy with peace and justice in the councils of the nations.”[1] In 1938, the U.S. Congress passed legislation making 11 November a legal holiday.

As we are well aware, the War to End all Wars did no such thing. Men and women have continued to take up arms in the cause of freedom. With the Second World War and the Korean War fresh on their minds, Congress amended the 1938 act and declared 11 November Veterans Day instead of Armistice Day. With that change, Veterans Day became an occasion to honor all veterans, both living and dead, for their service to the country. For a period of time, Veterans Day fell under the Uniform Holiday Bill passed in 1968 that designated Mondays as the official days to celebrate Washington’s Birthday, Memorial Day, Veterans Day, and Columbus Day. According to VA, “It was thought that these extended weekends would encourage travel, recreational and cultural activities and stimulate greater industrial and commercial production.” The change resulted in some confusion and the historical significance of 11 November could have been lost. As a result, President Gerald Ford signed legislation that returned the official holiday celebration to 11 November.

Although Veterans Day is not as widely celebrated as some other holidays, we should nevertheless take time today to remember the sacrifices that so many men and women have made to secure the freedoms we enjoy. Today, courageous and selfless men and women continue to risk their lives on the front lines. Serving far from home in dangerous circumstances, they continue the long tradition of putting country ahead of self. Some companies have stepped up to the plate to honor our veterans. For example, Golden Corral will serve free dinner buffets with beverage from 5PM to 9PM on Wednesday Nov. 11 to any person who is serving or has served in a United States Military branch, including the National Guard and Reserves. Other Veterans Day Discounts and Freebies can be found by following this link at Military.com.

War is a terrible thing. Unfortunately, history has demonstrated time and again that men and women must be willing to defend freedom and democracy using that terrible instrument. Veterans Day was established to celebrate the end of war and the heroes who fought and died to achieve that end. Today’s service members as well as veterans are still fighting to achieve lasting peace and establish freedom around the globe. They deserve our respect and, especially on this day, a recognition for all of their sacrifices. I include in that group the families that lovingly support (as well as those who have lovingly supported) men and women in the armed services. On behalf of all us at Enterra Solutions®, thanks for your service.