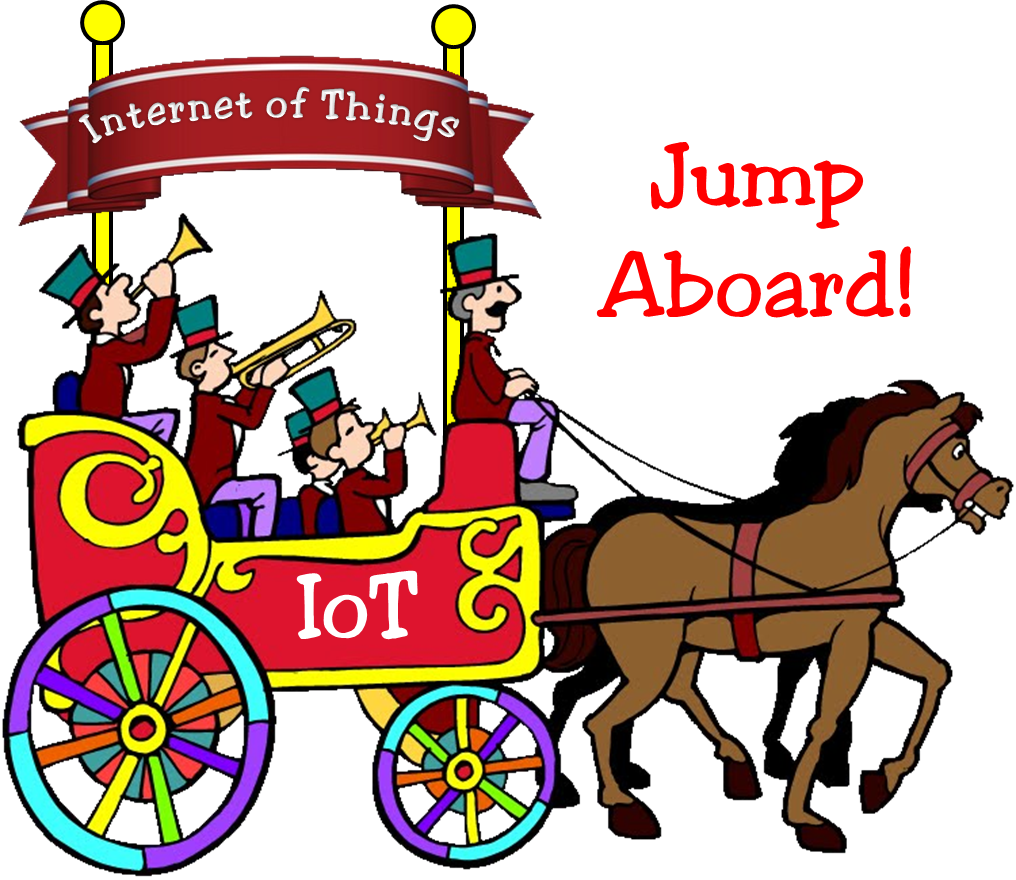 The Internet of Things Bandwagon

“Just as the use of the word ‘Cloud’ exploded in the late 2000s,” writes Bill McBeath (@BillMcBeath), Chief Research Officer at ChainLink Research, “we have seen the term ‘Internet of Things’ (IoT) appearing everywhere during the past couple of years. It seems as though everyone is jumping on the bandwagon.”[1] McBeath seems a bit skeptical about the IoT bandwagon; but, Lee Odess (@lodess), Vice President of Marketing at Brivo, harbors no such doubts. Odess believes that all companies should be jumping on board.[2] He explains:

“If you’re a sports fan, you’re likely familiar with the term ‘bandwagon fan’ — we all know someone that has ‘jumped on the bandwagon’ based on a team’s recent success. Often, these ‘fans’ face backlash from diehard followers due to a perceived lack of prior support and limited knowledge of the team. However, in the technology world, being a bandwagon fan can be the difference between success and failure. … The IoT has nowhere to go but up, getting bigger and better along the way. Now it’s up to you to decide if you’re ready to hop on the train now or find yourself running after the caboose on the empty tracks!”

Although Odess appears unsure whether it’s a bandwagon or a train that companies should jump aboard, he’s absolutely certain that the Internet of Things is not a fad that will disappear in a few years to be replaced by the next big thing. It is the next big thing. McBeath and Odess ask two important questions. McBeath asks the most basic question: “What is the Internet of Things?” Odess asks a good follow-up question: “What does this mean for me?” Let’s try to answer McBeath’s question first. McBeath defines the IoT this way: “The IoT is intelligent, connected objects and the capabilities and services they enable.” Feeling that definition might be a bit vague, McBeath elaborates:

“‘Intelligent‘ means there is some sort of device with an embedded computer integrated into or attached to the object, usually with some sort of sensor capabilities. ‘Connected‘ means the object is connected to the Internet, directly or indirectly (and potentially intermittently) through a gateway or intermediate set of connections or networks. Multiple layers of local intelligence may filter, interpret, and send only higher-level derived information over the network connection. ‘Objects‘ can include plants, animals, and people. ‘Capabilities‘ are functionality, services, and applications.”

Most people speak of the IoT as a machine-to-machine network, which is why General Electric calls it the Industrial Internet. Andy Daecher (@adaecher) and Tom Galizia (@tomgalizia), principals at Deloitte Consulting, assert, “The Internet of Things (IoT) is pulling alongside cloud and big data as another seismic IT shift that awaits simple, compelling scenarios to reveal its business potential.”[3] That’s a great segue into answering Odess’ question: “What does this mean for me?” Odess writes:

“The IoT is changing the way businesses run across every industry. From implementations in the healthcare industry that allow greater insights and data collection for doctors to make more informed diagnoses, to business applications that create frictionless experiences for guests and visitors when entering an office space or building, the implications are essentially endless.”

Both McBeath and Odess imply, but don’t explicitly state, that what makes the IoT powerful is the combination of data gathering and data analysis. A blogger who calls himself “ironwalker” notes, “Sensors and devices (i.e., Internet of Things) are starting to be embedded in many physical and biological things to collect data allowing organizations to better measure and improve performance. With sensors everywhere — from our smart-phones, body-fitness devices and cars to home climate systems, appliances, roads and medical equipment — opportunities to collect data are endless.”[4] Because the opportunities to collect data are endless, the amount of data that is going to be collected will be gargantuan. Randy Bean (@RandyBeanNVP), CEO and managing partner of NewVantage Partners, states, “The Internet of Things (IoT) may be a new topic to many executives, but it lies at the heart of the phenomenon of data proliferation.”[5] He adds, “While still small as a percentage of all data that is generated, it is expected that data generated by ‘things’ will grow from 2% of all data that is captured in 2013 to 10% in 2020, with this pace accelerating during the next decade.” Gathering data is obviously not going to be a problem. The same can’t be said about analyzing all that data. Bean writes:

“Big Data, in the context of the IoT, is about data ‘in motion,’ which refers to the velocity and highly interactive nature of the data captured by sensors and intelligent devices. Data is dynamic and exists on a time continuum. When understood in this context, it is easy to appreciate why data can have great impact when it is fresh — newly captured, highly interactive, based on an immediate activity and reflective of the current state of affairs or interest.”

To make sense of all of that data, it must be integrated and analyzed (sometimes in real-time) in order to provide the insights that decision makers require to react when problems or opportunities arise. Fortunately, new technologies, like cognitive computing, are emerging that will be capable of dealing with the oceans of data that are going to be generated. Accenture’s latest technology vision report calls cognitive computing the “ultimate long-term solution” for many businesses’ data-driven challenges. [“From Digitally Disrupted to Digital Disrupter”] Mark van Rijmenam (@VanRijmenam), Founder of Datafloq, notes that real-time analytics are a perfect companion to the IoT.[6] He explains:

“The Internet of Things is here and is here to stay. With billions of devices already connected and another trillion coming our way in the next decade, organizations should prepare themselves for a data flood. A data flood that can generate real-time insights in how the organization is performing. Using a plethora of data sources, such as smart meters, in-store sensors, medical devices, automotive sensors and wearables, organization can start to optimize their business. According a recent customer survey by Vitria, that is exactly what a lot of the organizations surveyed are already doing. … Real-time analytics for Internet of Things projects is rapidly becoming mainstream and according to the survey; it is becoming a strategic area for investments. Analysing the data streams in real-time can be seen as a requirement for organizations to become successful with IoT projects, since the data will be generated at high velocity. Especially the predictive insights that can be generated with real-time analytics are very valuable to organizations.”

Bean concludes, “Given the emergence of the IoT, and the expected growth of sensor and intelligent device-generated data, executives would do well to plan ahead for the next great frontier in the march of data and analytics.” In other words, Bean agrees that if you are not already on the bandwagon, it’s time to jump aboard.