In a rare, but welcome, act of bipartisanship, the Senate and House of Representatives have passed a bill called the CHIPS and Science Act of 2022. The so-called CHIPS bill passed the Senate with a 64 to 33 majority, with 17 Republicans voting in favor, and passed the House with a 243-187 vote, with 24 Republicans voting for the legislation. The President is expected to sign the bill into law today. Following passage of the bill in the Senate, President Joe Biden issued the following statement, “The Senate passed an historic bill that will lower costs and create jobs. As Americans are worried about the state of the economy and the cost of living, the CHIPS bill is one answer: it will accelerate the manufacturing of semiconductors in America, lowering prices on everything from cars to dishwashers. It also will create jobs — good-paying jobs right here in the United States. It will mean more resilient American supply chains, so we are never so reliant on foreign countries for the critical technologies that we need for American consumers and national security. I want to thank Senators in both parties for their hard work on this legislation.”[1]

As the President noted, there are both domestic and national security issues addressed by the bill. Journalist Catie Edmondson (@CatieEdmondson) explains, “The legislation reflects a remarkable and rare consensus in a polarized Congress in favor of forging a long-term strategy to address the nation’s intensifying geopolitical rivalry with Beijing. The plan is centered around investing federal money into cutting-edge technologies and innovations to bolster the nation’s industrial, technological and military strength.”[3] Even conservative economic commentators, like Greg Ip (@greg_ip) see the wisdom of the legislation. He explains, “Subsidies and tariffs waste resources, burden taxpayers and politicize decisions best left to markets. No wonder economists extol free trade. But there are exceptions, and the subsidies that Congress [approved] for semiconductor production may be one. … Allowing the production of semiconductors, and countless other products, to migrate to China may be economically efficient, but has a downside: the potential for China to leverage that dependence in some future conflict with the U.S. or its allies, much as Russia is now leveraging Europe’s dependence on its gas to undercut support for Ukraine.”[4]

• More than $76 billion to revive chip production in the U.S.

• $81 billion for the National Science Foundation over five years for research, equipment and STEM education.

• Nearly $10 billion for the National Institute of Standards and Technology.

As I have stressed in the past, investments in basic research are some of the most important investments the government can make.[6] I agree with the late Dr. Abraham Flexner, the first Director of the Institute for Advanced Study, who, in a 1939 essay, argued that curious people seeking answers to questions that puzzled them were the giants upon whose shoulders innovators have always stood. America needs to support new giants upon whose shoulders tomorrow’s innovators can stand.

Prior to the bill’s passage in the Senate, Senator Todd Young (R., Ind.), a leading sponsor of the Senate bill, stated, “Real world circumstances are a lot more complicated than the economic models that I learned at the University of Chicago, and have become more complicated with the emergence of our near-peer rival, and its state capitalist economic model.”[7] This bill should help make America more competitive. Since this was a bipartisan bill that bolsters the U.S. economy and our national security, members of both parties who voted for the bill should take pride in (and credit for) supporting the legislation. Following the House vote, the President declared, “[The] bill that will make cars cheaper, appliances cheaper, and computers cheaper. It will lower the costs of everyday goods. And, it will create high-paying manufacturing jobs across the country and strengthen U.S. leadership in the industries of the future at the same time.”[8] Whether it lowers the cost of everyday goods remains to be seen. What’s most important is the fact that the U.S. is shoring up the economy in an area critical to both consumer goods and national security and supporting domestic research & development.

As journalist Kevin Breuninger (@KevinWilliamB) notes, “The U.S. [currently] makes few of the most advanced types of semiconductors, which are largely produced in Taiwan, the epicenter of rising political tensions with China.”[9] In a two-hour call between President Biden and China’s President Xi Jinping, Taiwan was a major topic. Journalist Dave Lawler (@DavidLawler10) reports, “Beijing’s statement on the call warned in reference to Taiwan that ‘those who play with fire will perish by it.’ A senior U.S. official briefing reporters on the call wouldn’t confirm whether Xi used that exact language, but confirmed the leaders discussed their ‘differences’ over Taiwan.”[10] Obviously, the CHIPS and Science Act’s impact won’t be will felt overnight. Nevertheless, the sooner America begins strengthening its position the better. Passing the legislation is a good start. 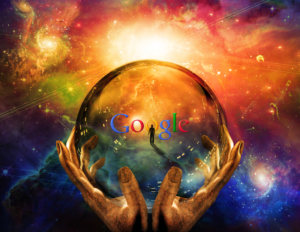 Recent headlines about time crystals read more like titles to a Harry Potter novel than they do an introduction to genuine news stories. However, Google