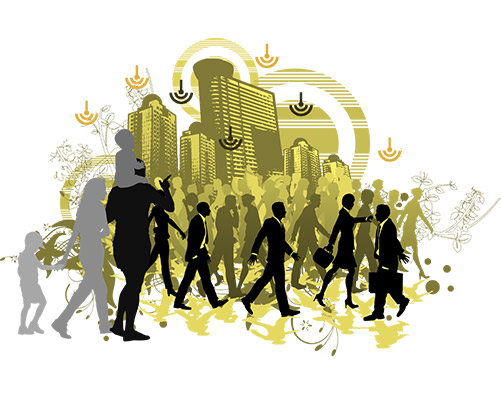 For any organization to be successful, people, processes, and technology must be aligned and optimized. Smart cities are no different.

For any organization to be successful, people, processes, and technology must be aligned and optimized. Smart cities are no different. Many discussions about smart cities begin with technology because emerging technologies are the primary drivers making cities more efficient. RAND Corporation scientists, Jared Mondschein (@JSMondschein) and Aaron Clark-Ginsberg (@aclarkginsberg), and Andreas Kuehn (@andreas_kuehn), a senior fellow at the Observer Research Foundation America, believe the best place to start smart city discussions is with people. After all, cities exist because of people and not vice versa. Mondschein and his colleagues write, “Across cities, residents appear to have grown increasingly concerned with the lack of transparency and communication between city hall and residents regarding local smart city initiatives. City officials told us that residents were often frustrated when they found that their city deployed technologies that were at odds with their key values (e.g., privacy, equity), weren’t addressing local needs, or weren’t user friendly. Additionally, while some community groups might be enthusiastic about certain smart city initiatives, others have perceived initiatives like autonomous street cars as a threat to their livelihoods and socioeconomic well-being.”[1]

The fact that some people are unhappy with change is not surprising and completely understandable. The truth of the matter is, however, change is coming. Ensuring that changes in the urban landscape benefit the vast majority of residents should be the prime directive followed by city planners. At the same time, they need to ensure those adversely affected by change are given new opportunities to succeed. MetroLab’s Executive Director, Ben Levine, and the co-chairs of the MetroLab Roundtable Series on Urban Instrumentation, Charlie Catlett, Santiago Garces, Christine Kendrick, and Michael Mattmiller, note, “We are in the early days of smart cities which fuse the physical and the digital realms, enabling people and autonomous systems to respond in real time to vast amounts of new data. The inputs: sensors, drones, video cameras, and other urban instruments that will gather data about the movement of people and monitor our built and natural environments. The expected output: cities more capable of achieving their priorities related to sustainability, resilience, and operations, and citizens better prepared to navigate their cities and services. Like the beginning of any trend, uncertainty reigns.”[2] They might have written “uncertainty and suspicion reign.” As the RAND scientists noted, many citizens fear smart cities are primarily surveillance cities. If the smart cities movement is going to progress, city planners need to convince residents that what they are doing will make life better for everyone.

How does a people-first approach change smart city planning?

City planners have a difficult job. Although they intuitively understand that cities are all about the people living in them, many planners get hyper-focused on the systems required to keep city services running smoothly. Occasionally, that means people get overlooked as systems and technology become the focus. This shift of focus is understandable. Brookings Institution fellows Adie Tomer (@AdieTomer) and Robert Puentes (@rpuentes) discuss the challenges city planners face. They write, “Cities are responding to myriad pressures (e.g., population growth, climate change, fiscal stress) by seeking new more efficient ways of operating through the use of information and communications technologies. These investments in digital infrastructure are designed to improve the way we manage the built environment and confront the challenges of urbanization. From mandating the construction of energy efficient buildings to creating intelligent transport networks, cities are seeking to become ‘smarter’.”[2]

To confront all those challenges, Dave Roegge, Marketing Director for High Tech at UPS, agrees that “a smart city needs to have a data-based infrastructure system.”[3] He adds, “But to be truly smart, it must also integrate numerous city functions such as energy, buildings, mobility, government services, citizen involvement, healthcare and infrastructure.” Citizen involvement is critical. IBM believes “people” are one of six core systems smart cities must optimize and integrate. The other five systems are: business; transport; communication; water; and energy. I would add a seventh system — waste management (which includes both trash and sanitation). As city planners work out how to deal with all those systems, they should always start with the people system (i.e., how do we want this system to best serve residents) and then work backwards. As Dan Hubert (@DanHubertAppy), founder and CEO of AppyParking, notes, “Truly smart technologies are more about the process than the physical outcome — from hard infrastructures, to social capital and digital technologies, they make cities more livable and resilient. The best, most effective smart technology is not flashy and attention grabbing, but rather is something that works in the background, focusing on seamlessly improving day-to-day experiences.”[4]

Markus Giesler (@DrGiesler), an associate professor of marketing at York University’s Schulich School of Business, writes, “Cities are actively shaped by five types of socio-political actors: Agenda-setters (city councils & governments), Experts (urban planners), Sponsors (investors), Developers (contractors) and … Citizens (residents, public-interest groups, industry influencers, academia leaders, visitors)! However, much of the research and planning around smart cities is driven by technology rather than by the needs of the citizens. The citizen experience is often overlooked! To redesign this experience, citizens need to have a seat at the table.”[5]

For a number of reasons, including the COVID-19 pandemic, smart city projects seem to have lost some steam. Another reason is that citizen activism has increased. Charles R. “Chuck” Wolfe, an author, consultant and attorney, believes what is missing from the smart cities movement is context. He explains, “I see cities united in a search for context, and how to wed old-world identity with the global forces of change. … Nearly every city struggles to integrate the challenges of globalism with a vernacular, unique history.”[6] He adds, “I am sometimes buoyed by approaches that mix generic trends with a vernacular past. Citizen engagement is evolving everywhere, through conventional, face-to-face methods, social media, or new approaches to co-creation.” Every city is unique and special. People-focused, smart-city strategies are necessary to maintain what is special about our cities. We don’t want urban uniqueness to be lost in a shiny new coat of technology.

The staff at SmartCitiesWorld (SCW)reports, “Citizen engagement and the enhancement of services and experience will be critical to the success of smart cities, according to international research firm Gartner. For smart citizens, the focus is not just about the use of technologies, such as artificial intelligence (AI) and smart machines, but the enhancement of services and experience, Gartner reports. Therefore, citizen-government dialogue is a key component that will ensure that the right issues are tackled.”[7] Bettina Tratz-Ryan (@btratzryan), research vice president at Gartner, told the SCW staff, “The way forward today is a community-driven, bottom-up approach where citizens are an integral part of designing and developing smart cities, and not a top-down policy with city leaders focusing on technology platforms alone.”

Do we need smart cities? The answer to that question is a resounding yes. As more people move to urban areas, the systems supporting those people need to become ever more efficient and effective. People living in cities already use resources more effectively than those living in suburban or rural areas; however, much more can be, and needs to be, done. Every one of the urban systems identified by IBM can be improved utilizing cutting edge technologies integrated by the Internet of Things and analyzed by cognitive technologies. Citizens deserve that kind of efficiency and the planet needs it.