I made several references over the past week to the Peshmerga, the Kurdish military that helped provide security during our trip to Kurdistan. The competence of this group is one of the reasons that Kurdistan is more secure than the rest of Iraq. The term “peshmerga” literally means “those who face death,” but the implied meaning is “those who are ready to die.” This sense of duty runs deep. It grows from a determination to avoid the kind of persecution the Kurds suffered in the past as well as a deep love for their ancestral homeland.

Although the Peshmerga is a modern military force, the traditions upon which it is built are thousands of year old. The first mention of the people of the mountains was made by the ancient Babylonians (circa 650 BC). They labeled them the Qutil, which some scholars believe was derived from the Semetic Akkadim word “qard” or the related Indo-European word “gurd,” both of which can mean warrior or hero. In other words, the Kurds have always seen themselves as an ethnic group willing to defend their homes and their land. The Peshmerga see themselves as elite members of a heroic people.

The most famous warrior of Kurdish descent was the great Islamic general Saladin, who fought and defeated Christian crusaders. The Peshmerga welcomed U.S. forces and fought side-by-side with them in the effort to overthrow Saddam Hussein. It is estimated that there are between 80,000 and 100,000 active Peshmerga in Kurdistan. As the attached picture of a Peshmerga soldier taken near Dohuk shows (click to enlarge), the Peshmerga are a modern and well-equipped fighting force. The Peshmerga also allow women to serve. This tradition began when the Peshmerga were a guerilla force fighting to make the Kurdish area of Iraq a safe haven. Women also fought alongside coalition forces at the beginning of the current conflict. The attached picture shows female Peshmerga celebrating the fall of Kirkuk. 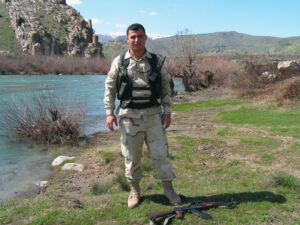 The reason I’ve written this rather lengthy description of the Peshmerga is that I want to underscore how important security is if an area wants to foster economic development. As my previous posts have pointed out, Kurdistan is booming economically. Although it suffers from occasional terrorist attacks, such as the suicide truck bombing that took place while I was in Erbil, for the most part Kurdistan is stable and safe. As a result, you can see building going on everywhere. A lot of rebuilding was necessary, of course, because Saddam Hussein destroyed a lot of Kurdish infrastructure when his forces were forced to withdraw from the area following Desert Storm. But there is building going on, not just rebuilding. Building takes material and some of that material is coming across the Turkish border. Much of that material, however, is being produced indigenously.

In an earlier post, I discussed an enterprising Kurdish family in Dohuk that is putting together a conglomeration of businesses. Many of those businesses are specifically tied to building and rebuilding efforts, such as their brick factory and concrete fabrication plant. As you can see from the attached images, these are new, modern plants making top quality products. 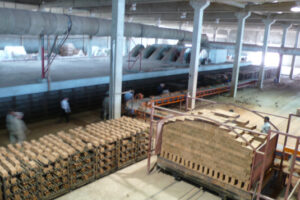 Paul Brinkley and his Pentagon team are trying to spur this kind of activity throughout Iraq. They understand that such manufacturing plants offer hope. Plants provide hope because they offer jobs. Jobs offer hope of a more secure future for families. Products manufactured by these plants are a visible manifestation that things can get back to normal. Buildings that rise from the rubble of war create more jobs and more hope. They give people a stake in a brighter future. Fear must be replaced by hope.

Hope can be infectious and success can spread virally. It all begins, however, with enough security that progress can take hold. Before that security is achieved in central and southern Iraq things are likely to get worse before they get better. Sunnis and Shiites have shown no penchant for compromise and cooperation. In similar past situations elsewhere around the world, when compromise and cooperation doesn’t take place it generally takes a crushing victory by one side or the other before security and stability emerges. If that is the course that this war takes, it will be a huge tragedy for the innocent people of Iraq. Circumstances, however, don’t look good. As John Ward Anderson writes [“60 Die in Iraq; Study Warns of Collapse,” New York Times, 18 May 2007]:

“U.S. officials hope political compromises among Iraq’s Shiites, Sunni Arabs and Kurds will complement a U.S. troop buildup in the capital and help to improve Iraq’s security situation. … Some critics say that political progress has been too slow, while military counterinsurgency strategies have achieved mixed results, reducing some kinds of sectarian violence — such as killings by death squads — but having little impact on others, such as large suicide bombings typically carried out by the group al-Qaeda in Iraq or affiliated Sunni alliances.”

This is an outcome that Paul Brinkley is trying to avoid by offering hope and a stake in the future for more and more Iraqis (be they Kurd, Shiite, or Sunni). He is driven by a vision and his unquenchable spirit to succeed is infectious. We can only hope it “infects” enough people in Iraq that they can avoid what could become an even worse situation than they now face.