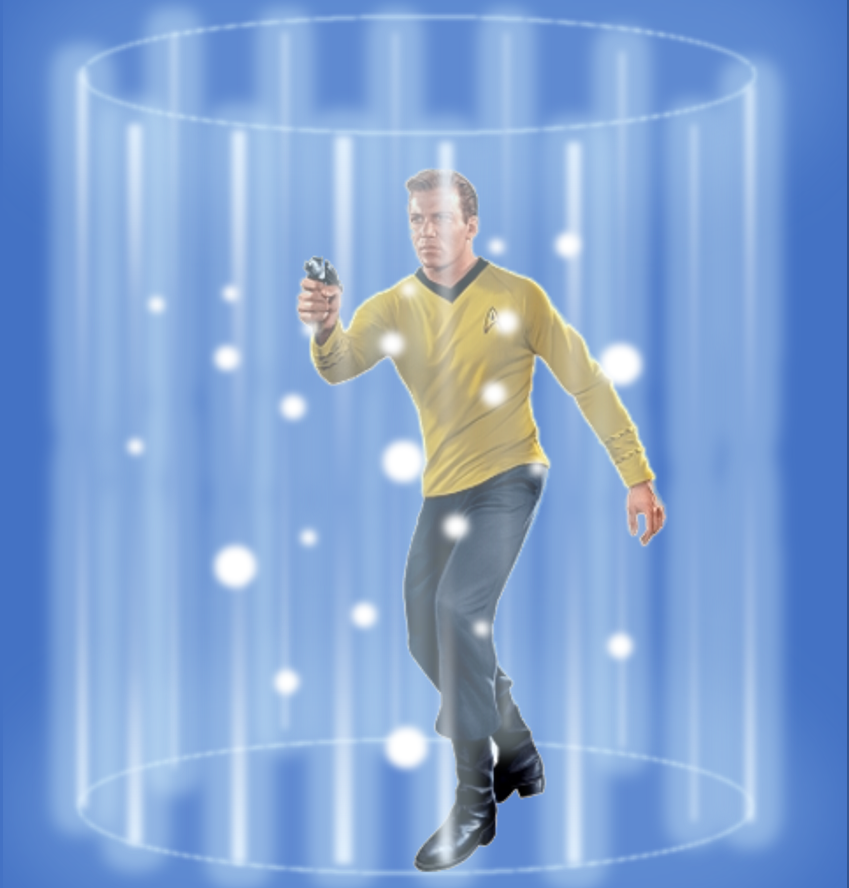 Quantum Teleportation isn’t a ‘Beam Me Up’ Technology

One of the most iconic technologies from the late Gene Roddenberry’s science fiction series Star Trek was the transporter, a teleportation device that allowed life forms to move from one location to another without having to physically make the journey. As Wikipedia notes, “Teleportation is the hypothetical transfer of matter or energy from one point to another without traversing the physical space between them. It is a common subject in science fiction literature, film, video games, and television. Teleportation is often paired with time travel, being that the travelling between the two points takes an unknown period of time, sometimes being immediate.”[1] Although Captain James Tiberius Kirk, portrayed by actor William Shatner, never actually spoke the phrase, “Beam me up, Scotty,” it has become a catchphrase for teleportation. As Wikipedia notes, “Teleportation has not yet been implemented in the real world. There is no known physical mechanism that would allow this.” What is possible, Wikipedia notes, is “quantum teleportation, a scheme for information transfer.” In fact, scientists from Fermilab, Caltech, NASA’s Jet Propulsion Laboratory and the University of Calgary confirmed they achieved “long-distance quantum teleportation” last year.

What is quantum teleportation?

According to Wikipedia, “Quantum teleportation is distinct from regular teleportation, as it does not transfer matter from one place to another, but rather transmits the information necessary to prepare a target system in the same quantum state as the source system. The scheme was named quantum ‘teleportation’, because certain properties of the source system are recreated in the target system without any apparent information carrier propagating between the two.” If that sounds strange, it is. Quantum teleportation involves a neat trick that can only be performed at the quantum level of physics known as entanglement. Entanglement involves a pair of quantum particles linked together in a such a way that when one particle is altered its twin is instantaneously altered in exactly the same way regardless of how far apart the entangled particles may be. Professor Albert Einstein famously called entanglement “spooky action at a distance.”

Journalist Dev Kundaliya reports that scientists involved in the teleportation breakthrough “achieved a sustained, long-distance ‘quantum teleportation’ with fidelity (data accuracy) greater than 90 per cent.”[2] He adds, “The scientists said that they were able to teleport qubits made of photons over a distance of 44 km (27 miles) over a fiber-optic network using state-of-the-art low-noise superconducting nanowire single-photon detectors and off-the-shelf optical equipment. This is the first time that scientists have demonstrated teleportation of photons with high accuracy over such a long distance.” If you are not familiar with the term “qubit,” it’s another of the weird things possible only at the quantum level of physics. Unlike a normal “bit” of information used in traditional computing — which can only be a 1 or a 0 — a qubit can simultaneously be both a 1 and a 0. Scientists achieve this bit of quantum magic by putting a particle, like a photon, into a superposition state. Because these activities take place on such a small scale, they are expensive to perform and difficult to maintain.

As noted above, quantum teleportation primarily involves the transfer of information. What is unique about quantum teleportation is that any attempt to intercept messages being carried by this method breaks the entanglement and destroys the message being transferred. Kundaliya explains, “[Entanglement] can be used to create encrypted communications channels that are secured against hacking by the laws of quantum physics. However, the delicate nature of quantum information makes it very difficult for scientists to beam entangled photons over long distances without interference. In long optical fibers, there is always a chance for noise to interfere with the entangled states.” Although quantum teleportation may sound like a super secure email system, futurists are much more interested in developing a quantum internet. Science journalist Michael Irving (@MikeIrvo) explains, “A quantum internet would be much faster and more secure than the one you’re using right this second — and now such a network may be one step closer to reality.”[3] In a separate article, Irving notes:

“A quantum internet takes advantage of the spooky world of quantum physics to create a fast, secure network. It works through two quantum phenomena: the first is quantum entanglement, where two particles can become so inextricably linked that no matter how much distance separates them, changing the properties of one will change those of the other. And since that communication happens instantly, a quantum internet could be much faster than today’s networks. The second phenomenon is quantum superposition, where a particle can exist in two different states at once. This is what enables tighter security of the information shared across a quantum network. Information is encoded into entangled pairs of photons, in a superposition of states – in data terms that means they represent both a one and a zero at the same time. With a decoder at each end, the message can only be read by its intended recipient. If anyone else tries to tap into it along the way, it will cause the superposition to collapse into a random state, which garbles the message. That makes it unreadable to the hacker, while also alerting the intended recipient about the attempt.”[4]