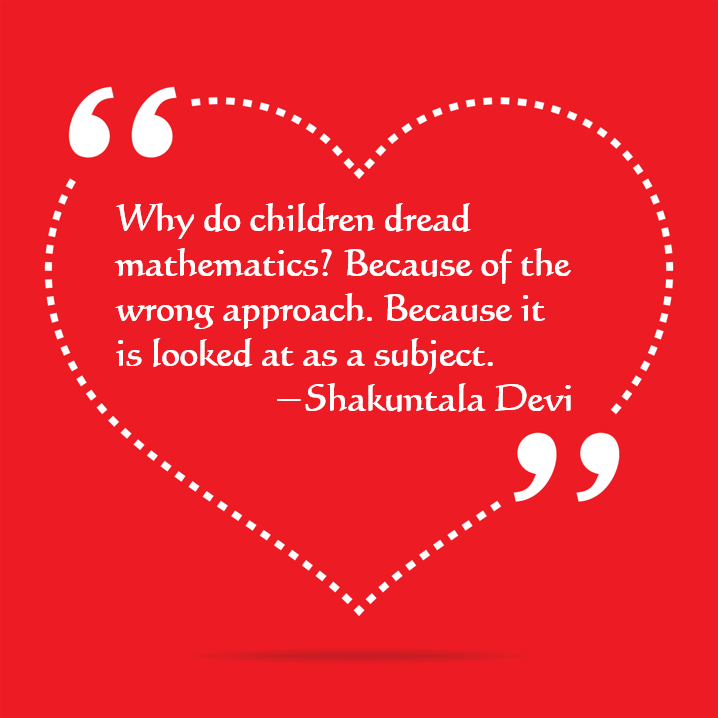 The late Shakuntala Devi, known as the “human calculator,” once insisted, “Without mathematics, there’s nothing you can do. Everything around you is mathematics. Everything around you is numbers.” Mathematics has been touted as the only universal language. An article in The Economist asserts, “The eternal language of numbers is reborn as a form of communication that people all over the world can use — and, increasingly, must use.”[1] Most people would agree mathematics is essential to understanding and getting along in the world. That’s why mathematics is one of the fundamental areas of STEM education (which stands for science, technology, engineering, and mathematics). The staff at Newsweek notes, “STEM education is a great way to set children up to be lifelong learners. The critical thinking and methodology taught in science classes builds skills in children to adapt to new learning environments. Mathematics skills are relevant across many jobs.”[2] So why do so many people have a problem with mathematics? The great Renaissance-era polymath Nicolaus Copernicus had one answer. He once stated, “Mathematics is written for mathematicians.” And not every one aspires to be a mathematician. In fact, I’m pretty certain many people use the term “math” because it’s a four-letter word.

Overcoming the fear of math

Dyani Sabin (@DyaniSabin) writes, “Children are not born afraid of math, they learn to fear it — sometimes as early as age six. In fact, half of all children in the U.S. suffer from math anxiety: the crippling fear of math. This is particularly pronounced in girls, especially when they have math-anxious female teachers. Parents are a big part of the problem, too: a recent study showed that when math-anxious parents help with math homework, they pass on their fears to boys and girls.”[3] One way to help people overcome their fear of math is to demonstrate how it can be used in daily life. Sol Garfunkel, executive director of the Consortium for Mathematics and Its Applications, and David Mumford, an emeritus professor of mathematics at Brown University, write, “It is through real-life applications that mathematics emerged in the past, has flourished for centuries and connects to our culture now.”[4] They assert the current educational approach “is based on the assumption that there is a single established body of mathematical skills that everyone needs to know to be prepared for 21st-century careers. This assumption is wrong.”

Journalist and Harvard graduate Jay Mathews writes, “I got an A in algebra II, I think. That was long ago. I do know that I have long since forgotten whatever I learned in that course and have never used it since. That has become a national problem.”[5] If we are going to get children to fall in love with, rather than dread, mathematics, we need to teach students how to use math in their daily lives. That’s why I, along with a few colleagues, founded The Project for STEM Competitiveness — to help get a project-based, problem-solving approach into schools near where we live. The last thing America needs is students languishing in class saying, “I’ll never use this stuff.” Gina Picha (@ginapicha), a public school elementary instructional coach, insists project-based programs aren’t fulfilling their potential if they don’t spark a general interest in mathematics. She explains, “Project-based learning and other practices that support educators in integrating across content areas have benefits, but those benefits will mean nothing if our young people do not enter in STEM fields or majors. These skills and experiences are rich and useful when done well, but secondary to the real roadblock that many American students face. We must look deeper than any new program or initiative aimed at simply increasing interest in STEM careers. We must look at a known problem that we often avoid talking about: the math problem.”[6]

What can be done about the math problem?

Picha insists, “Quality math instruction is real-world, collaborative, and involves productive struggle, debate, and conversation.” Andrew Hacker, a professor at Queen’s College, believes a new approach to teaching math is essential. John Wihbey (@wihbey), an assistant professor at Northeastern University, explains, “[Hacker] questions the benefit of advanced math, such as trigonometry and calculus. … Hacker doesn’t deny the virtues of differential equations for budding engineers, but he argues that the way we teach math to millions of other students is deeply flawed and morally misguided. It alienates and fails many, contributes to the dropout rate in high school, blocks even a community college degree, especially for the socioeconomically disadvantaged (a ‘harsh and senseless hurdle’), and in turn ensures a less equal society. Given how dull most students find math, he’d much rather generate enthusiasm for numbers by focusing on complex real-world problems. He writes that students need to ‘read, speak, and think numerically,’ particularly using public data, from IRS tax figures to census numbers to household spending trends.”[7] Wihbey continues, “A lot of math teachers would agree with Hacker that how the subject is taught is more important than what is taught — that a culture of exploration and inquiry is more important than mindlessly solving equations. But we can’t abandon advanced math entirely and ignore the students who excel at it and go on to work in fields that require it. Giving students more valuable and engaging options is the real solution.”

Jennifer L. Ruef, who teaches people how to teach math at the University of Oregon, writes, “Whether you believe it or not, you are a math person.”[8] She explains, “Many people believe that mathematics lives in math classes, textbooks and the minds of ‘math people,’ and that math people are human calculators. But this vision of what mathematics is, and what it can accomplish, misses so much.” Ruef believes math can come alive in peoples’ minds if it’s taught the right way. She explains, “When you engage with mathematics as a personal creation, even abstract questions take on a life of their own. When we understand why something works, we are more likely to remember how it works, making correct answers more likely. Better living through better understanding. Or at least, perhaps more satisfaction.” She concludes, “The next time you find yourself inventing a solution to some problem — how to estimate a length of hose, which supermarket special is actually the better deal, which route will get you where you need to go the fastest, remember this: You, my friend, are a math person.” She believes we can convince our children they are math people as well by helping them solve real-world, personal problems using mathematics.

Robert Q. Berry III, a professor of mathematics education at the University of Virginia and president of the National Council of Teachers of Mathematics, told Mathews, he “wants to build what he calls ‘positive mathematics identity and agency.’ He described that as students ‘seeing themselves as doers of mathematics and engaging in the behaviors of doers of mathematics’.” Mathews adds, “That will be a difficult assignment, at least in high school. Many teens don’t even see themselves as doers of homework.” I agree with Ruef that we must look for opportunities to get students engaged in using math. “Aside from homework,” she writes, “developing an eye for math and exploring it together helps us all to see the many ways math influences our lives. Playing games, solving puzzles, looking for patterns of any kind are all great ways to learn to love math.”