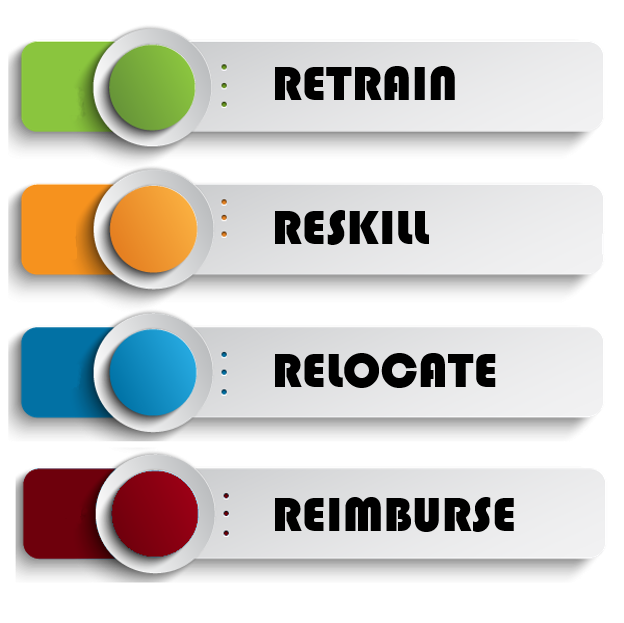 Worrying about jobs sustainability during a period of low unemployment may seem unwarranted. However, with so many predictions being made about how many jobs are going to be taken over by artificial intelligence (AI) and robotics, this the perfect time to address this vital topic. Waiting to act until these predictions come true, would be too late. To prepare for this uncertain future, academics, labor groups, companies, and government policymakers need to collaborate to ensure dire predictions about economic and social chaos don’t come to pass. Many analysts believe there are four areas needing to be addressed: retraining, reskilling, relocating, and reimbursement (i.e., wages). For individuals about to enter the job market, and for coming generations, we need to ensure educational systems adapt to prepare them for jobs that don’t currently exist — but that’s a topic for a different article. In this article, I want to address what we need to do to protect jobs for those already working.

Because retraining and reskilling are closely associated, I’ll discuss them together. Mike Volpi (@mavolpi), a General Partner at Index Ventures, notes, “Retraining programs for displaced workers will undoubtedly be critical. Whether it’s globalization or AI, we need to assist people in transforming their professional skills to what the market needs. We should remember that many of the jobs we do today didn’t exist 20 years ago. So although automation will mean that some jobs disappear, new ones will be created too. We will need reliable and thoughtful mechanisms to connect workers with those new opportunities — marketplaces for labor and services that allow the monetization of specific skills, and there’s more opportunity there.”[1] R. Edward Freeman (@RE_Freeman) and James R. Freeland, professors at the Darden School of Business at the University of Virginia, agree with Volpi. They observe, “Whatever the net increase or decrease in jobs overall, what is not at issue is that these will be different jobs, requiring different skill sets.”[2] The two big questions are: Who should make retraining and reskilling available; and, who pays for this training?

There are more than one answer to those questions. For some workers, companies are the best providers of retraining and reskilling. Those are workers whose jobs, thanks to AI and robotics, have changed but not been eliminated. Paying for that retraining and reskilling falls clearly on the company. For workers who have been made redundant, universities, technical colleges and other skills-focused education systems are likely places to find retraining and re-skilling courses. How to pay for that education and training remains a hot topic of discussion. The ultimate answer will probably include funding from government, companies, and the individuals involved.

Older workers present a particular challenge. Sue Shellenbarger (@SueSWSJ) explains, “As more workers in their 40s and beyond plan to delay retirement until their mid-60s, a growing number will have to hustle to reassert their value to their employers.”[3] I suspect positions now filled by older workers have a greater chance of being eliminated by AI and robotics than positions held by younger people. That can be a problem. Shellenbarger writes, “Many people face psychological roadblocks to learning new jobs or skills, says Andy Molinsky, a professor of organizational behavior at Brandeis University and author of a book on stepping outside your comfort zone. Older workers may feel resentful about having to stretch themselves when they’ve already worked for decades. Or they may think, ‘This doesn’t feel like me,’ Dr. Molinsky says.” Nevertheless, it’s absolutely essential they be given opportunities to retrain and reskill in order to stay in the workforce. With the national debt growing in many nations, a day of reckoning is coming. In order to meet this crisis, most analysts agree, entitlements will need to be delayed and maybe even reduced. Inevitably, this means people will have to work longer (hence, older workers will need to be life-long learners).

When jobs are eliminated, displaced workers either need to find jobs near where they live or relocate to where new jobs are being created. For people with families and mortgages, relocating may not be an obvious option. If someone has been made redundant as a result of automation, chances are they are not alone. That means local housing markets may stagnate or crash leaving out-of-work individuals with no way to sell their houses or pay their mortgages despite their willingness to relocate to find new work. Although this appears to be an individual’s problem, companies and governments can play an important role. Danielle Paquette (@DPAQreport) reports, “A Nebraska city with more job listings than applicants has extended a special offer to employers: It will match signing bonuses for out-of-town hires — up to $5,000. A county in Michigan is advertising $15,000 payouts to STEM graduates who decide to live in its rural expanses. And the state of Vermont recently approved a fund to pay $10,000 to employees who relocate there.”[4] The point is, jobs either need to go to where the people are or the people need to be relocated to where the jobs are.

Concerning getting people to move, Heather Long (@byHeatherLong) reports, “The reality is Americans have become homebodies. People in the United States are moving at about half the rate that they did in the 1970s and ’80s, according to census data, and no one really understands why. There are obvious economic barriers to moving. It’s expensive and risky to leave a place your family has been living in for generations, and there’s no guarantee the job you move for will still exist in a few years. But there seems to be something deeper holding people in place.”[5] That something deeper is fear of the unknown. As a result, Long notes, “Among economists, a major rethink is underway about how to help people in forgotten towns, and it’s starting to filter into policy debates in Washington. The mentality is shifting from ‘let’s get these people to move’ to ‘let’s get new jobs to these towns’.”

There are two areas of discussion currently at play. The first area is the discussion of wages. How can you ensure people are paid sufficiently well for the work they perform? The second area, and one generating the most heated debates, is the notion of a universal basic income (UBI). Felicity Hannah (@FelicityHannah) asks, “If robots and other automated systems do become capable of learning faster, performing work more efficiently and never need a coffee break, how can humans compete and protect their future pay?”[6] For workers whose jobs change, she notes, “Greater automation could potentially improve their pay and conditions if it boosts productivity.” However, for displaced workers, the only available jobs may be in lower paying, service-related fields. Society will have to decide whether they value these services enough to make them better paying positions.

The most controversial idea to be put forth is providing displaced workers with a universal basic income. Many people perceive this as subsidizing people to be idle. Ian Goldin (@ian_goldin), a professor at the University of Oxford, suggests five reasons UBI is a bad idea.[7] “First,” he writes, “UBI is financially irresponsible. Universal means everyone gets it. Even in the richest societies, if UBI was set at a level to provide a modest but decent standard of living it would be unaffordable and lead to ballooning deficits.” As I noted above, deficits are already out of control and UBI would only exacerbate this situation. “Second,” Goldin notes, “UBI will lead to higher inequality and poverty. It typically aims to replace existing unemployment and other benefits with a simple universal grant. As shown by the OECD, the Paris-based club of mostly rich nations, by reallocating welfare payments from targeted transfers (such as unemployment, disability or housing benefits) to a generalized transfer to everyone, the amount that goes to the most deserving is lower. … Third, UBI will undermine social cohesion. Individuals gain not only income, but meaning, status, skills, networks and friendships through work. … Fourth, UBI undermines incentives to participate. Stronger safety nets are vital. No decent society should tolerate dire poverty or starvation. But for those who are able, help should be designed to get individuals and families to participate in society; to help people overcome unemployment and find work, retrain, move cities. … Fifth, UBI offers a panacea to corporate and political leaders, postponing a discussion about the future of jobs.”

As the above discussion reveals, there are no easy answers to questions about how to deal with workers displaced by AI and robotics. Part of the answer is ensuring displaced workers have opportunities to be re-employed. As is often the case, however, the devil is always in the details.

Footnotes
[1] Mike Volpi, “How We Can Prepare For Artificial Intelligence Job Displacement,” Forbes, 28 June 2018.
[2] Edward Freeman and James R. Freeland, “The Time for Retraining Is Now,” MIT Sloan Management Review, 6 April 2018.
[3] Sue Shellenbarger, “In a Digital Era, How Can Older Workers Stay in the Game?” The Wall Street Journal, 22 May 2018.
[4] Danielle Paquette, “These places will pay U.S. workers thousands of dollars to move there,” The Washington Post, 21 June 2018.
[5] Heather Long, “America’s forgotten towns: Can they be saved or should people just leave?” The Washington Post, 2 January 2018.
[6] Felicity Hannah, “Why we need to protect our income from robot automation,” Independent, 12 May 2018.
[7] Ian Goldin, “Five reasons why universal basic income is a bad idea,” Financial Times, 11 February 2018.