The Center for Global Development recently released its 2007 Commitment to Development Index (CDI). According to the Center’s web site, the “CDI assigns points in seven policy areas: aid (both quantity as a share of income and quality), trade, investment, migration, environment, security, and technology. Within each component, a country receives points for policies and actions that support poor nations in their efforts to build prosperity, good government, and security. The seven components are averaged for a final score. The scoring adjusts for size in order to discern how much countries are living up to their potential to help.” On this basis, the Netherlands scores highest and the United States ranks fourteenth. 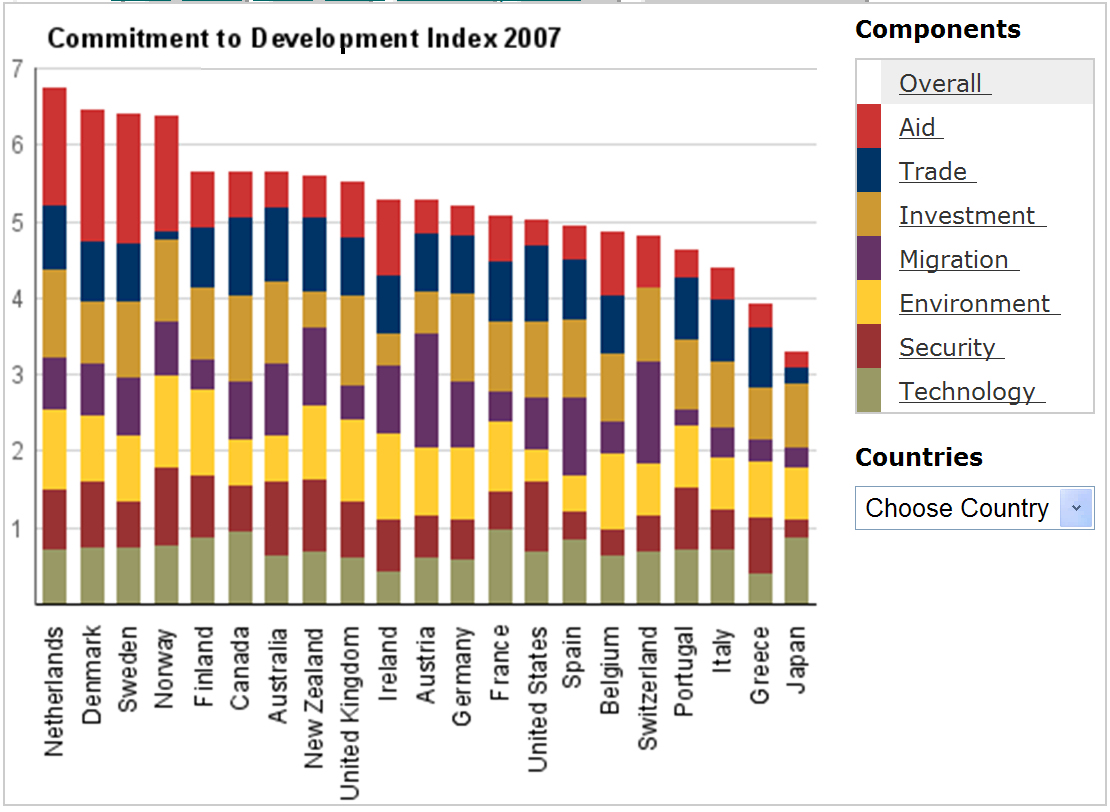 Nora Boustany, writing for the Washington Post, reports on the release of the Index [“U.S. Ranks 14th In Annual Index of Foreign Aid,” 11 October 2007].

“Because of massive assistance to Iraq and Afghanistan in recent years and initiatives to fight HIV and AIDS, the United States and Britain have provided more foreign aid to developing nations than ever before, according to David Roodman, a research fellow at the Washington-based Center for Global Development. But total amounts are not everything. According to this year’s Commitment to Development Index, compiled by averaging measures in seven policy areas, the Netherlands comes first and Japan last in the 21 countries included in the study. Britain ranks ninth, and the United States is 14th.”

In determining Index rankings, the author reports that some aid is heavily discounted.

“Roodman is the author of the study, which factors in performance on aid, trade, investment, the environment, security, technology and migration. Moral obligation and security concerns are the obvious motivations for developed countries such as the United States and Britain to give aid, but the index is not a simple measure of funds. ‘U.S. aid to Iraq was $10 billion in 2005, the last year for which we have data. That is one of the largest country-to-country aid flows ever,’ Roodman said. But ‘the CDI only counts that aid at 10 cents on the dollar because of high corruption and weak rule of law.’ Beyond the quantity of aid, the index penalizes donors for giving assistance to rich or corrupt governments or tying aid to the purchase of their own goods, which limits recipients’ ability to shop around for the lowest price.”

The web site permits you examine individual nation scores more closely. The attached images show the scores for The Netherlands and for the United States. 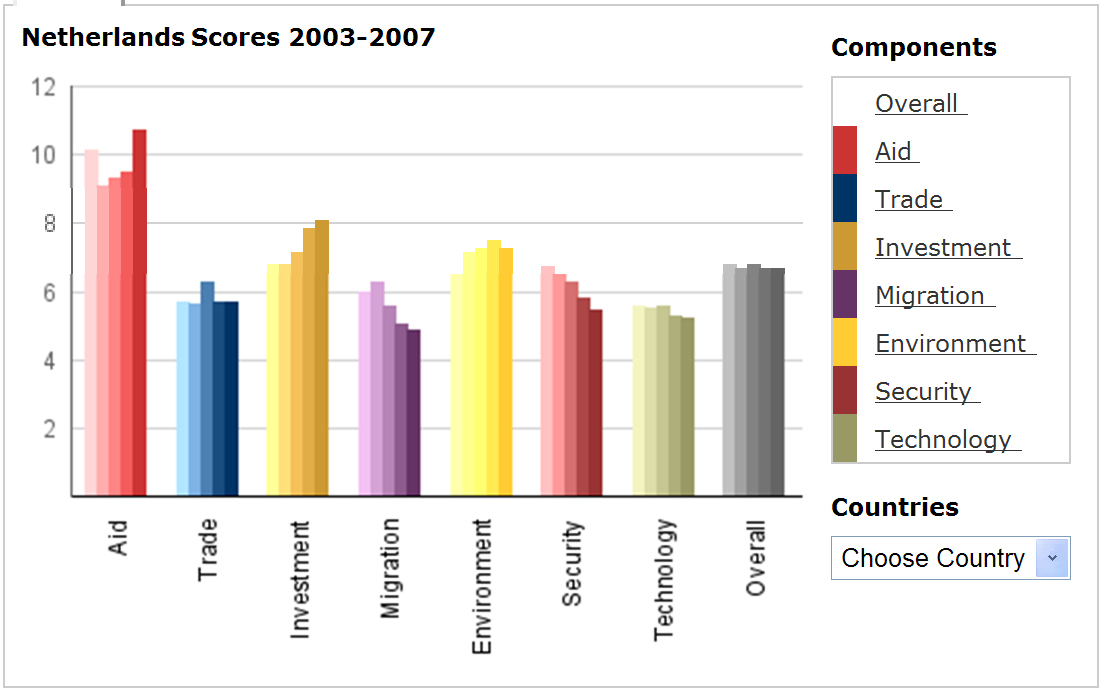 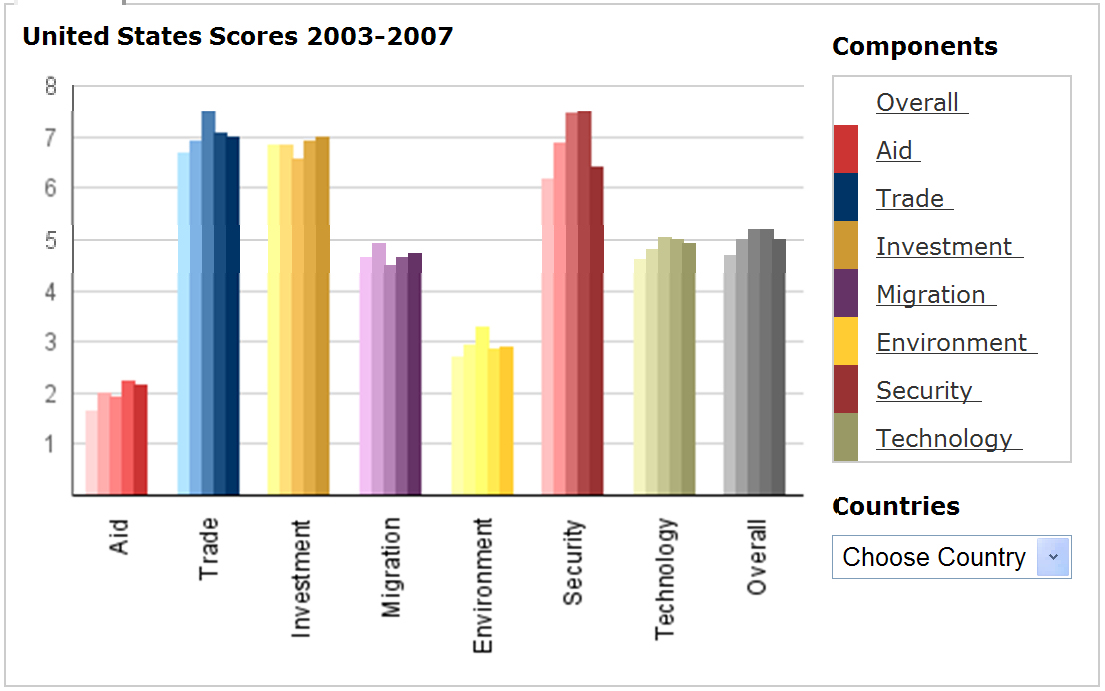 As you can see, there is a significant difference in where each country scores best in the Index. The Netherlands, for example, scores extremely high in the provision of foreign aid and also high in investment. It scores lower, however, in trade, migration, and technology. The profile for the United States looks quite different. The United States scores highest in trade, investment, and security, and much lower in foreign aid. The high scores in security and investment come as no surprise considering all that the U.S. is doing in Iraq and Afghanistan. Boustany points out that two prominent nations are missing in the Index — China and India.

“Roodman said China is normally not included in the index because of its low per-capita annual income — $1,595 compared with America’s $38,165 at the official exchange rate. India is also not included in the regular index. This year, Roodman said, he wanted to focus on the environment and looked at China and India just in that one category. In terms of gas emissions that cause global warming, one American’s emissions are equivalent to those of four Chinese or nine Indians.”

Another area of interest was trade.

“On trade, the study said the system of rules governing world trade has acted as a barrier to some of the goods that poor countries are best at producing. William R. Cline, a senior fellow at the Center for Global Development, is quoted in the study as saying that if rich countries removed remaining trade barriers, it would lift 200 million people out of poverty.”

Since trade and investment are much more important than aid in helping bring countries out of poverty, one shouldn’t make too much of the fact that the U.S. scores low in the aid area since it scores high in trade and investment. Those are also areas that the Enterra Solutions® Development-in-a-Box™ framework targets and the reason that I found the CDI so interesting. I also found one other thing interesting considering a recent blog I wrote about Growing Demographic Tensions. That post talked about growing racial tensions in Switzerland and how immigrants are spurring political reactions there. In the CDI, however, Switzerland ranks second in migration among nations included in the index. As I noted in my post on demographics, Switzerland does have a large immigrant population — the current political climate and racial tensions apparently didn’t affect its rating. Japan, another country discussed in the blog, ranks next to last. For those interested in development, the CDI is an interesting snapshot of how various countries view the challenge and how they believe they can best address it. The CDI is like a development fingerprint for the nations included in the study.