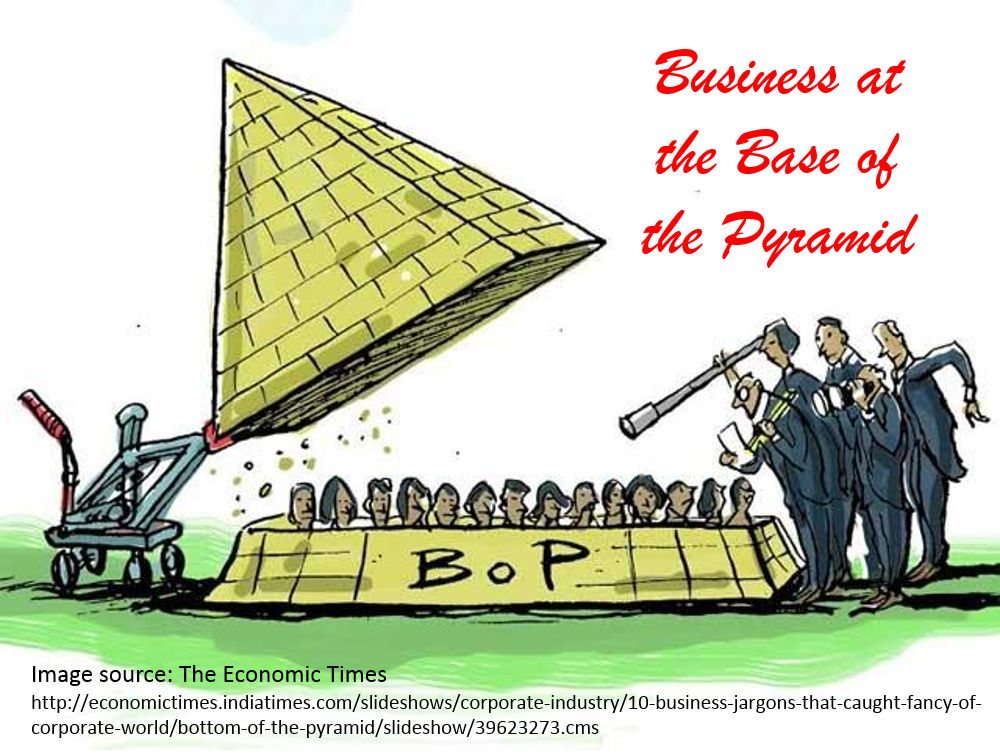 Business at the Base of the Pyramid

“Imagine a simple triangle diagram of the planet’s population,” writes John S. Rosenberg. “A fortunate couple of billion upper-income people — in the United States and Canada, much of Europe, Japan, Australia, and prospering urban centers in parts of Asia and Latin America — occupy the apex. The invisible hand of market capitalism supplies this prominent minority with bountiful goods and services. But that leaves a lot of people out. At the very bottom of the pyramid, a billion or more humans live in poverty (on less than $1.25 per person per day), often depending on government programs and charitable aid to subsist.”[1] Not much attention was given to people living at the base of the pyramid (commercially, at least) until the late C. K. Prahalad, a University of Michigan business professor, published his book The Fortune at the Bottom of the Pyramid. In that volume, he discussed the potential buying power of low-income consumers. Prahalad, however, was not encouraging exploitation of the poor; rather, he wanted companies to treat them with respect and offer them quality products in quantities they could afford and in ways that made products easily available. Those represent significant supply chain challenges. Business at the base of the pyramid is not business as usual. V. Kasturi Rangan, Michael Chu, and Djordjija Petkoski warn, “Cross the invisible line into the base of the economic pyramid in emerging markets and you enter a world of pitfalls. If a company embarks on an initiative that focuses solely on commercial gain, civil society and governments are likely to oppose it intensely.”[2]

Although Rosenberg talks about the billion people “at the very bottom of the pyramid,” most analysts who discuss market size at the base of pyramid refer to a group that includes approximately four billion people. Allen Hammond, William J Kramer, Julia Tran, Rob Katz and Courtland Walker explain, “Four billion low-income people, a majority of the world’s population, constitute the base of the economic pyramid. New empirical measures of their behavior as consumers and their aggregate purchasing power suggest significant opportunities for market-based approaches to better meet their needs, increase their productivity and incomes, and empower their entry into the formal economy.”[3] When you cobble all of those insights together, you understand that what is needed (and what is expected) from companies that want to do business at the base of the pyramid is socially responsible commerce. Last year Laura Paddison (@laurapaddison) published a list of ten suggestions that various experts had made during an online chat about doing business at the base of the pyramid.[4] Those suggestions were:

1. Make it about core business. “One of the biggest errors companies can make is to treat base of the pyramid (BoP) projects differently from their core business, according to Cornell’s Eric Simanis. Operating in very low income populations presents enormous challenges from high operating costs and poor economies of scale to sceptical consumers, ‘so if these projects aren’t being driven as rigorously and as laser-focused on meeting the numbers as companies would with “traditional markets”, they simply won’t have a shot at profitability’.”

2. Scaling a business can take time. “Simanis pointed to a difference between scalable and replicable. Every business model is replicable, he said, given time and money. Scalable, however, means it must hit a target return on investment within a certain time frame. ‘So a break-even business isn’t scalable; a single business unit that is profitable may not even be scalable … the profits have to be high enough and fast enough at the business unit level for a project to be scalable.’ This is not an easy task and businesses need a huge amount of patience and the willingness to look beyond traditional short term metrics.”

3. Understand the needs, demands, and constraints of the target market. Although we’re all familiar with the adage “beggars can’t be choosers,” Prahalad pointed out that consumers at the base of the pyramid are both aspirational and discriminating. Paddison writes, “Understanding what BoP customers need and want requires a significant time investment. [Tatiana Bessarabova from Business Call to Action] advised working closely with communities, adjusting the business model to the local context and understanding the financial needs of customers. Introducing the idea of paying for a product that prospective BoP customers may not be familiar with means a lot of work on tailoring a companies’ marketing, distribution and financial approaches.”

4. Work should be grounded in country offices. No one knows the lay of the land better than someone who lives on it. Paddison observes, “The major challenge BoP units face is where they are based. Projects should be grounded in country, said Eric Simanis. ‘You can’t run a business in Kenya out of the Paris office and have a standalone cell in the field (one of the greatest values of being inside a corporation are the economies of scale of leveraging operations). But if you run projects that are aiming to make less than the target return or are diluting margins, the country office will have no interest in it’.”

5. There is a significant role for the public development sector. As noted above, there is an expectation that companies doing business with those living at the base of the pyramid will support greater social needs as well as consumer needs. They can often best accomplish that objective by partnering with government organizations that can provide funds or tax breaks or with NGOs. Simanis is skeptical of such collaborations because he believes that companies should operate on a business basis and not cross the line into the realm of corporate social responsibility (CSR). I’m not so sure that one can draw a clear line between business ventures and CSR initiatives when operating at the base of the pyramid. I agree with Simanis that profitability should drive a venture because that is the only way it will have lasting impact; but, there is no reason that impact can’t have a social benefit.

6. Business needs to constantly adapt their products. I probably would have put this suggestion a little higher on the list. Consumers at the base of the pyramid can’t afford large quantities of most items and have a difficult time storing them even if they can afford them. Paddison writes, “Businesses that most successfully serve BoP markets constantly adapt their products to meet consumer preferences, said Ashton’s Emily Haves. She referred to Barefoot Power which found that customers were much more receptive to their solar products if the cords were white, not black. ‘It’s key to respect everyone as a customer, even if their purchasing power is low.’ [Oliver Kayser from Hystra] sounded a note of caution against variety, however, which he said can lead to complexity in terms of training the salesforce, ordering and supply chain. He advised that pilots be kept as small as possible.” Kayser makes some very good points that companies would do well to heed.

7. BoP business doesn’t mean exploiting the poorest communities. “Serving low income populations, when it’s about creating viable livelihood opportunities — by incorporating them as consumers, suppliers or distributors — is not exploitative. Haves said that in the energy sector, most have concluded that for energy access products to be sustainable — they need to be delivered through market-based mechanisms. ‘Experience has shown that when products are given away there is no feedback mechanism for the donor to understand the end-users’ priorities, which means the products don’t evolve to be truly useful and desirable’.”

8. It’s not just about selling products. Paddison writes, “There are many different ways business can engage with BoP markets through the value chain.” Rangan, Chu, and Petkoski add, “Business models that call for creating private and public value while aiming for scale are gradually becoming more prevalent. Hindustan Unilever has succeeded by training tens of thousands of sales and distribution agents. The Afghan mobile network operator Roshan has succeeded by doing the same for small retailers. The local communities’ growing economic health boosts profits and prosperity for everyone along the value chain.”

9. Take the risk away from the customer. Consumers at the base of the pyramid want quality products as much as those living at the top of the pyramid. At the same time, their financial circumstances make them more vulnerable to risks associated with products or services of poor quality. Haves told Paddison that a company called Off Grid Electric removed risk from the BoP consumer by selling solar electricity as a service rather than a product. Kayser told her that Grameen Shakti ties monthly loan repayments to visits by maintenance technicians “to reassure customers that repairs would be carried out.” It also reassures “the company that payments would be made” — creating a win-win situation.

Rosenberg concludes, “However humanity pursues economic development, [Harvard Associate Professor Shawn] Cole said, even though ‘it won’t solve all the world’s problems, private enterprise is probably the most important solution to those problems,’ alongside aid and ‘other tools in our tool kit.’ This is, in other words, an opportunity within reach, with existing techniques more skillfully applied.”

Footnotes
[1] John S. Rosenberg, “Business for the Other Billions,” Harvard Magazine, September-October 2015.
[2] V. Kasturi Rangan, Michael Chu, and Djordjija Petkoski, “The Globe: Segmenting the Base of the Pyramid,” Harvard Business Review, June 2011.
[3] Allen Hammond, William J Kramer, Julia Tran, Rob Katz and Courtland Walker, “The Next 4 Billion: Market Size and Business Strategy at the Base of the Pyramid,” International Finance Corporation and World Resources Institute, March 2007.
[4] Laura Paddison, “10 lessons for doing business with base of the pyramid markets,” The Guardian, 31 July 2014.