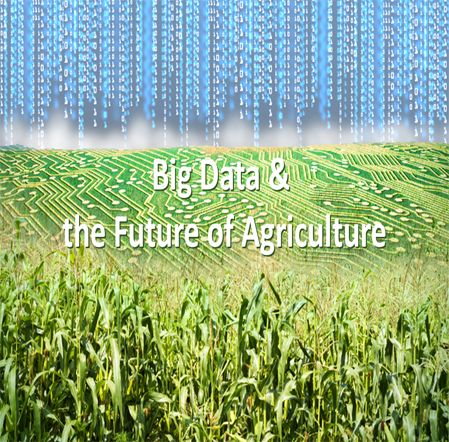 “Producing enough food, fiber and fuel for more than 9 billion people by 2050, while conserving natural resources is a challenge that has become increasingly complex,” writes Rod Snyder (@RodSnyderWV), President of Field to Market. “In the next 35 years, experts predict that we’ll need to double agricultural production to keep pace with population growth, changing diets and increasing demand. And farmers will have to meet this challenge in the face of a changing climate with increasingly extreme weather patterns.”[1] Although 2050 sounds like it’s a good ways away, Stewart Collis (@stewartcollis), CTO and co-founder of AWhere, reminds us, “There’s only 34 growing seasons between now and [2050], so this is a problem we need to solve now.”[2] As we approach the year’s end, another of those growing seasons can be marked off the calendar. Of course, growing enough food is only part of the problem. Food security also entails getting the food from the farm to the fork — and that’s a supply chain challenge.

Much of the agricultural industry’s hope to increase production in a sustainable way relies on science and technology. And one of the most promising areas of research involves big data analytics — because better analytics could hold the key to unlocking increased productivity. There is, however, a hitch in this hope. Laurie Bedord (@BedordLaurie) observes, “Many farmers guard their data like a chef guarding a prized recipe. For years, [they’ve] worked diligently to tweak the ingredients of [their] secret sauce that leads to a successful season. So compromising control of that information is unsettling.”[3] Bedord reports that unlocking the potential of that data, while allowing farmers to maintain ownership of it, was given a boost late last year when “a coalition of major farm organizations and agriculture technology providers (ATPs) … announced an agreement on data privacy and security principles that will encourage the use and development of a full range of innovative, technology-driven tools and services. Members of the coalition include American Farm Bureau Federation, American Soybean Association, Beck’s Hybrids, Dow AgroSciences LLC, DuPont Pioneer, John Deere, National Association of Wheat Growers, National Corn Growers Association, National Farmers Union, Raven Industries, The Climate Corporation — a division of Monsanto, and USA Rice Federation.”

Finding a way to share data responsibly couldn’t have come at a better time. The amount of data being generated is about to explode thanks to the Internet of Things (IoT). New York Times‘ columnist Steve Lohr (@SteveLohr) writes, “The Internet of Things — the vision of a world brimming with communicating sensors and digital smarts — occupies the peak of Gartner’s most recent ‘hype cycle.’ And a report released two months ago by the McKinsey Global Institute laid out the potential multitrillion-dollar payoff from the emerging technology.”[4] Of course, all of that multi-trillion dollar payoff isn’t going to come in the agricultural sector but, an important part of it will. Lohr reports at a recent workshop in California, “Lance Donny, founder of an agricultural technology start-up, OnFarm Systems, gave a wide-ranging talk that laid out the history of farming and presented the case for its data-driven future. Inexpensive sensors, cloud computing and intelligent software, he suggested, hold the potential to transform agriculture and help feed the world’s growing population.” Lohr continues:

“In his presentation, Mr. Donny placed the progression of farming in three stages. The first, preindustrial agriculture, dating from before Christ to about 1920, consisted of labor-intensive, essentially subsistence farming on small farms, which took two acres to feed one person. In the second stage, industrial agriculture, from 1920 to about 2010, tractors and combine harvesters, chemical fertilizers and seed science opened the way to large commercial farms. One result has been big gains in productivity, with one acre feeding five people. The third stage, which Mr. Donny calls Ag 3.0, is just getting underway and involves exploiting data from many sources — sensors on farm equipment and plants, satellite images and weather tracking. In the near future, the use of water and fertilizer will be measured and monitored in detail, sometimes on a plant-by-plant basis.”

One of the wild cards facing the agricultural industry is water availability. The ongoing California drought brought that message home in spades. As Donny noted, big data has a role to play in how water is used for agriculture. To help achieve better water usage, the Land and Water Division of the UN Food and Agricultural Organization (FAO) announced earlier this year “that it would develop a new open-access data portal that uses satellite imagery to provide insights into more efficient and productive use of agricultural waters — helping water-scarce countries in the Near East and North Africa better manage the resource.”[5] Jippe Hoogeveen, project coordinator and technical officer for the UN agency, stated, “Reporting on water productivity is lacking at country level in water scarce regions and this data will be key to creating sustainable agricultural systems in areas with scarce resources.” According to press release, “The aim of the new data portal … is to collect and analyze satellite information to improve land and water productivity and boost the sustainability of agricultural systems. All information will be openly available for countries and users who need it.” The fact that such systems are only beginning to be developed underscores the fact that the agricultural industry stands on the stoop of a new data-driven era. As another article notes, “Just as combustion-driven horsepower transformed farming in the early 20th century, farm technology experts contend that data-driven, analytical horsepower will spark a similar transformation of farming in the 21st century.”[6] It continues:

“The driving force behind this new horsepower revolution is commonly known as Big Data. This term is used to describe the colossal amounts of data being generated throughout the world and within the agricultural sector at breakneck speed and that are becoming so large and complex that processing, transferring, assessing and storing it often proves challenging. For now, Big Data, despite its immense promise, remains a sleeping giant with much of its potential still locked in the yield monitors and other precision farming technologies that farmers use routinely.”

Although precision farming will benefit crop yields in the United States and other developed countries, Lohr notes, “The most intriguing use of the technology may well be outside the United States.” Since all stakeholders from farmers to consumers play a part in helping ensure food security, better access to data and the insights that can be drawn from it will be critical for ensuring that stakeholders understand their role. Snyder concludes:

“As fewer and fewer Americans are involved in the business of farming, it can become more difficult to communicate how crops make their way from the fields and into our kitchens, as well as the environmental tradeoffs that are required. As more food companies take on the role of establishing sustainable sourcing partnerships within their supply chains, we can not only better explain to consumers how food is grown, but also make the entire system more sustainable in the long run. In the end, this kind of unparalleled collaboration and transparency leads to reduced climate impacts and more productive and profitable farming communities. And those are results worth celebrating.”

With so many challenges lying ahead, my only caution is not to start celebrating too early.