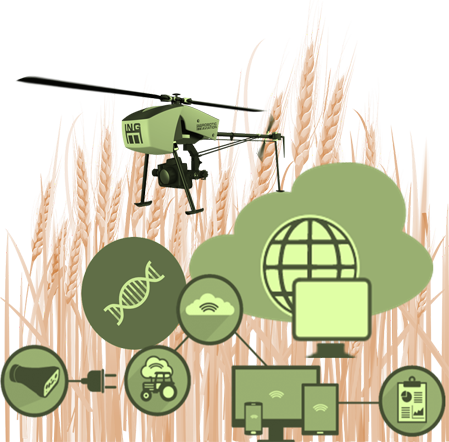 Big Data and Technology: Changing the Face of Agriculture

There are few certainties in life; but, we all know that the global population is growing (predicted to reach 9 billion people around the year 2050) and, in order to survive, those people must be fed. We also know that the planet isn’t getting any larger so the amount of fertile ground for agriculture isn’t going to increase either. That means more food must be grown on existing farmland to meet the growing demand or other alternatives must be found. If you want to complicate the picture, you can throw in climate change and water shortages. Stewart Collis (@stewartcollis), CTO and co-founder of AWhere, reminded Jenn Webb (@JennWebb), “There’s only 34 growing seasons between now and [2050], so this is a problem we need to solve now.”[1] Agriculture professionals are increasingly turning to big data analytics and advanced technologies to meet growing demands. The question remains: Can big data and technology help feed the world in the decades ahead? We better hope they can. Collis, whose company provides big data analytics to the agricultural sector, is obviously a believer. He told Webb, “We have up to 20 years of daily weather history for any location on the planet in agricultural areas. We can build models on that data, we can look at risk, and we can run forecasts and run pest and disease model forecasts on that data.” Webb reports that Collis’ models “can be scaled down to the hyperlocal level — to a single field, in fact.”

When you think about big data analytics and advanced technologies, large agricultural enterprises are probably what spring to mind. Collis, however, told Webb that developing regions are also putting big data to use. Hyperlocality is important for developing countries, he told her, because “much of the population growth is expected to occur in developing countries, where agriculture often depends on smallholder farmers working on one to two acres.” Webb continues:

“Working with local farmers in developing countries presents a number of interesting logistical challenges, he said, not the least of which is the widespread use of feature phones (as opposed to smartphones). Regional agriculture centers typically access [AWhere’s] Weather Terrain interface on a desktop platform, but often will communicate with local farmers via text messages, so adapting the delivery of information becomes an issue.”

Hyperlocality is also essential for another endeavor that promises to increase crop yields — precision farming. Collis told Webb, “We’ve had precision farming for a long time, but it was really adopted by larger corporate organizations and large farms — not really affordable for smaller farmers.” If we are going to feed the world’s growing population, that has to change. Collis told Webb we need to “leverage cheaper and cheaper sensors, and get that information integrated in a way that makes sense, that can provide value and, really, decision support systems.” Agriculture, like every other business, requires decisions to be made all of the time. In other economic sectors, businesses are discovering that cognitive computing systems can be trusted to make routine decisions leaving human decision makers free to concentrate on more pressing challenges. The cloud will undoubtedly make cognitive computing available to farmers as well. In today’s world, farmers need to be agronomists, meteorologists, conservationists, and economists and cognitive computing can put much of that expertise at their fingertips. Other technologies are going to have an impact as well.

In fact, Cheryl V. Jackson (@cherylvjackson) notes, “Drones, data and robots are increasingly contributing to what shows up on your plate.”[2] Jackson reports that Natasha Chatlein, senior science and technology adviser for the Netherlands Office for Science and Technology, while speaking at the United Fresh produce industry trade show, discussed several new business models for farmers. They include:

• A greenhouse initiative in Rotterdam, Netherlands, that uses aquaponics, with an onsite restaurant and a community agricultural component. The Netherlands is a major exporter of agricultural goods.

• Netherlands-based Plantlab’s integration of LED lighting, plant physiology and mathematics. ‘Everything is mathematically calculated — how much water, how much air, what the temperature has to be, how much blue light, how much red light — to make sure the plant has exactly what it needs and not a drop more,’ she said.

• A public/private greenhouse robot program being developed in the European Union to harvest sweet peppers.

Anyone who has ever visited the Netherlands knows that land there is at a premium. Technologies being used there and in Israel (where water is scarce) are likely to find their ways onto farms that have heretofore not had to worry about either land or water shortages. Most people are aware of serious water concerns in the decades ahead. For example, you might have read about the significant cutbacks in water usage that have been placed on farmers in California, one of America’s breadbasket states. Scientists are now warning that fertile agricultural lands may also be in trouble. Steve Connor (@SteveAConnor) reports, “The fertility of the world’s soil is reaching a peak that will threaten global food supplies this century unless more is done to preserve the long-term viability of existing farmland, according to a group of leading scientists.”[3] Decreasing farmland due to infertility is not the only challenge facing the agricultural sector. Connor reports, “Between 1970 and 2000, an area of agricultural land the size of Denmark became urbanised and in the next 20 years an area the size of Mongolia — some 1.5m sq km — will be swallowed up by city development.”

Some of that loss could be countered by increasing urban agriculture (see my article “Urban Agriculture: Feeding Them Where You Find Them“); but, urban agriculture is only part of the answer. Every potentially valuable technology will have to be applied to the challenges ahead as well as big data analytics that provide insights into how best to use resources to increase yields. According to an article published by the Wharton School, “Big Data now offers the hope that the Green Revolution will be succeeded by a more sustainable Evergreen Revolution.”[4] According to the article, big data analytics can be used in the agricultural arena in a number of ways; such as, developing new crop hybrids that are more robust and nutritious; informing farmers what crops will grow best in the conditions found on their land; providing hyper-local weather forecasts, as discussed above; and, tracking food from farm to table. The article notes, as did Collis earlier, “Big Data is needed most by farmers who can least afford it.” It explains:

“Major corporations are investing heavily in Big Data for agriculture, and start-ups in the space are proliferating, supported by the increasing availability of venture capital. But all this market-driven activity does little to help poor, developing areas such as sub-Saharan Africa, where productivity is very low by U.S. standards and where virtually all of the world’s population growth is predicted to take place in the coming decades.”

Even in the case of those farmers operating at the base of the economic pyramid, the article notes that there are efforts being made to provide them with the tools they will need to contribute to the challenge of feeding a hungry world. As Bill Gates told the G-8 Conference on Open Data for Agriculture, “To reap the benefits of Big Data, it’s important to ensure this is publicly available and shared with research and development partners. Only then will we be able to create a rich data ecosystem to support the knowledge-intensive and location-specific enterprise of agriculture. This is especially important in developing countries.”

There is not a silver bullet solution for feeding the world. A number of complementary strategies must be implemented. Among those strategies is the adoption of good analytics and appropriate technologies. The challenge is not insurmountable; but, implementing new solutions that dramatically change how food is grown, harvested, and distributed will face both cost and cultural challenges.