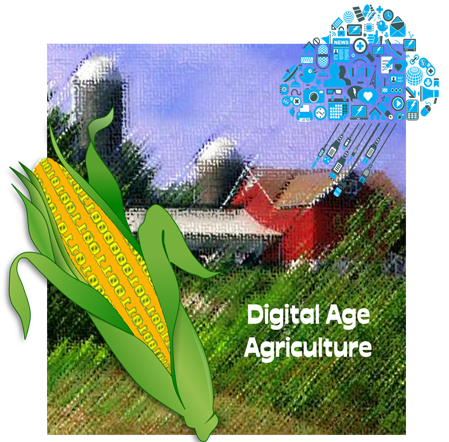 Big Data and Technology are Changing the Face of Agriculture

“When you think of science, technology, engineering and mathematics, you might think of high tech fields like Nanotechnology or microchip processing, but more and more, these days they’re starting to show up in [farmers’] fields,” writes meteorologist Jason Caterina (@JasonCaterina). “Farmers are using new technology to help us all keep food on the table.”[1] Getting a little more science in the field is a good thing; especially since a recent survey concluded: “Consumers trust farmers by far more than scientists, nutritionists, government agencies, companies engaged in farming or agriculture, even social media contacts outside agriculture.”[2] The study also concluded:

“Consumers also show strong support (73 percent) for the use of technology and farming techniques needed to keep the American food supply consistent and affordable and to help farmers be more efficient in growing crops. The survey indicated consumers generally are more willing to accept new technologies in agriculture when they are discussed in an open, transparent manner.”

Before science can be effectively applied to fertile fields, it needs to be effectively taught in our schools. Kindra Plumb reports that agents and specialists from the Colorado State University Extension program understand that simple fact and, back in 2010, developed a fun way to introduce elementary school children to the science behind growing food. The program is called Agfest. Plumb explains, “AgFest is an innovative, eclectic approach to help 5th and 6th grade students explore science, technology, engineering and math (STEM) through hands-on educational workshops that supplement their school curriculum.” I’m a big fan of “hands-on” education. That’s why I, along with a few colleagues, founded The Project for STEM Competitiveness to help get a project-based, problem-solving approach into schools near where we live. Our focus isn’t on agriculture, but our basic philosophy for getting students interested in STEM subjects appears to be the same. Plumb points out that it is more important than ever to teach students about agriculture. Most people now living in the United States, especially city dwellers, are “several generations removed from any form of production agriculture and do not understand the science behind the production of their food.” She reminds us that America was founded as an agricultural nation and quotes President Thomas Jefferson who, in 1785, wrote:

“Cultivators of the earth are the most valuable citizens. They are the most vigorous, the most independent, the most virtuous and they are tied to their country and wedded to its liberty and interests by the most lasting bands.”

Times have changed over the past couple of centuries; but, our appreciation of cultivators of the earth has remained pretty much the same. Jefferson, however, would have been amazed at how today’s farmers use technology to help grow the food we eat. “Just as combustion-driven horsepower transformed farming in the early 20th century, farm technology experts contend that data-driven, analytical horsepower will spark a similar transformation of farming in the 21st century. The driving force behind this new horsepower revolution is commonly known as Big Data.”[3] The article continues:

“For now, Big Data, despite its immense promise, remains a sleeping giant with much of its potential still locked in the yield monitors and other precision farming technologies that farmers use routinely. ‘Right now, the argument can be made that precision agriculture data has no value because it’s not yet being used,’ said Dr. John Fulton, Alabama Farmers Federation professor of biosystems engineering at Auburn University and one of the nation’s leading experts on the implications of Big Data to farming. ‘I think the farming community would be surprised by how much data is left on machines and never downloaded and archived — or, for that matter, acted upon.’ But analytical tools are being developed to help farmers use this data to make highly refined decisions about their farming operations. This data can now be stored on the Web using services or cloud technology to enable farm consultants, ag retailers and machinery manufacturers to help farmers make better informed decisions.”

For all of recorded history, we know that data in some way or another has been used to help farmers make decisions about growing crops. At first it was big picture data, like when the seasons were changing. Then books like the Farmers’ Almanac were published with historical data and forecasts. That remained pretty much the same until recently when big data sets and the means to analyze them became available. Farmers, however, have been rightfully skeptical about sharing their data with others because they had no assurances about how it would be used. Laurie Bedord explains the attitude that has been prevalent among farmers this way: “Many farmers guard their data like a chef guarding a prized recipe. For years, [they’ve] worked diligently to tweak the ingredients of [their] secret sauce that leads to a successful season. So compromising control of that information is unsettling.”[4] But according to Bedord, that attitude may be changing thanks to “a coalition of major farm organizations and agriculture technology providers.” The coalition “has announced an agreement on data privacy and security principles that will encourage the use and development of a full range of innovative, technology-driven tools and services.” According to Bedord, “Members of the coalition include American Farm Bureau Federation, American Soybean Association, Beck’s Hybrids, Dow AgroSciences LLC, DuPont Pioneer, John Deere, National Association of Wheat Growers, National Corn Growers Association, National Farmers Union, Raven Industries, The Climate Corporation — a division of Monsanto, and USA Rice Federation.” Farmers still leery of sharing data with the corporate world now have means of sharing data with each other. Issie Lapowsky (@issielapowsky) reports, “A startup called Farmers Business Network, which aggregates data from farmers across the United States, [has been established] to help them learn from each other.”[5]

So how can big data help farmers grow more, waste less, and increase profits? Richard “Rich” Cooper, Vice President of research and emerging issues at the U.S. Chamber of Commerce Foundation and a principal with Catalyst Partners, LLC, explains, “Where farmers of previous generations may have relied on old almanacs and passed on family notes to record the happenings of the land they worked, many farm machines in use today collect troves of crop and soil data in new and mind-blowing ways. Sensors, imagery and other technologies are all working together to give farmers details about soil content, weeds and pests, sunlight and shade, and other factors. When analyzed, it can help them adjust their activities during planting season so they can reap bigger rewards during the harvest.”[6] Big data is also helping improve the seeds that farmers plant and is able to do it much more rapidly than using traditional methods. “The traditional process involved in creating … successful varieties is costly, labor intensive and can take as long as 10 years or more. What Big Data does is speed things up. Now, explains James C. Carrington, president of the Donald Danforth Plant Science Center, an independent, nonprofit research center, marker-assisted breeding techniques allow scientists to determine in the lab, within a matter of days, ‘which of the progeny of the cross, which of the seeds, contain the combination of traits that you want. In other words, you can get an analytical readout from a machine, and you don’t have to wait until you test and grow up all of the seed.’ Naturally, this shortens development time dramatically.”[7]

The term used for planting the right crop at the right time in the right place is “prescriptive planting.” An article The Economist notes that “prescriptive planting is catching on fast” and that “the benefits are clear.”[8] The article concludes, “Prescriptive planting could boost yields everywhere, just as mass, anonymized patient records could improve health care. But its success depends on service providers persuading users (farmers or patients) to trust them. If the users think they are taking a disproportionate share of the risks while firms are getting an excessive chunk of the benefits, trust will remain in short supply.” If things work out the way that the coalition mentioned above hopes, concerns and challenges will be overcome and big data will be put to good use in the field.